Results and photos are here!

In the World Cup, expected favorite and 2007 Horse of the Year, Curlin, had the misfortune of drawing the 12 post, which has never won. Trainer Steve Asmussen's assistant Scott Blasi, who has been handling Curlin since he arrived in Dubai 6 weeks ago, said, "We got a long run to the first turn and a 3/8 mile stretch so we like our draw, he likes to be on the outside of horses, so I think it sets up for him. I think he's more strong, more mature since his 3-year-old year, he's the complete package."

His main competition could come in the form of local hope Jalil from the powerful Godolphin Racing stable of Sheikh Mohammed, breaking from the 8 post. He won the major local prep, the Maktoum Challenge Round 3, and his jockey Frankie Dettori is confident his horse has a chance to pull off the upset. He said, "I have been very impressed by Curlin. But he is beatable, every horse is beatable. he has had to travel a long way - it is different conditions on a different track. We have a good hand and we have to go out thinking we can beat him. Jalil always had potential, he is a fantastic-looking horse. We haven't got to the bottom of him yet, but he has had three challenges this year and every time he has come up with the goods."

The undercard features the two richest turf races in the world, the 2400 meter (about 1 1/2 mile) Sheema Classic (G1) and the 1777 meter (about 1 1/8 mile) Duty Free (G1), worth $5 million each, and as a result, attracting the maximum field size of 16 runners. The Sheema could be a coming out party for Youmzain, who finished second to European Horse of the Year Dylan Thomas twice last year. The Duty Free could see a filly beat the boys, with dual Guineas winner Finsceal Beo, Princess Zahra's Darjina, and Japanese hope Vodka among the entrants. The $2 million Golden Shaheen (G1) is the 1200 meter (about 6 furlong) sprint event along the dirt straightaway, with Breeders' Cup Sprint runner-up Idiot Proof in against Sunshine Millions Sprint winner Benny the Bull and local runner Diabolical, purchased by Godolphin last fall.

Along with the four Group 1 events, there are 2 Group 2 events carded. The $2 million UAE Derby features northern hemisphere 3-year-olds and southern hemisphere 4-year-olds, with Godolphin filly Cocoa Beach a good chance to defeat males including American hope Massive Drama. The first Thoroughbred race on Saturday night is the $1 million Godolphin Mile at 1600 meters (1 mile) on the dirt, with American horses Barcola and Diamond Stripes taking on Godolphin runner Elusive Warning. The first race on Saturday night's card, the $250,000 Dubai Kahayla Classic (G1) at 2000 meters (1 1/4 miles) on dirt, features Purebred Arabians, with Madjani going for a record fourth win in a row.

Once again, the saddlecloth numbers correspond to post positions barring any late scratches. The World Cup goes off at 1:30PM (all times Eastern), while the first race available for American bettors, the $1 million Godolphin Mile (G2) has a post time of 9:40 AM. The table to the right has all the post times for the races being simulcast to the US. The first live race at Nad al Sheba is the $250,000 Dubai Kahayla Classic for purebred Arabians (post time 9:00AM) and is not available for wagering.

Since betting is illegal in the UAE, the international wagering hub is located in South Africa and their rules apply. Win, exacta, and trifecta wagering are the same as the American versions, however, there is no show pool but bets to place pay to third place, like a show bet normally would.

The races will be shown live in North America on HRTV in the U.S. and HPI-TV in Canada, and the big race will be shown on tape delay on ESPN2 during their Florida Derby telecast from 6-7pm EDT. Below are the post times for each of the races that will be simulcast in the US followed by the entries and post positions for the Dubai World Cup. 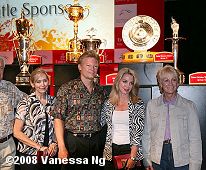 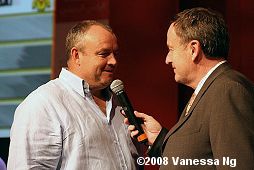 Left: AP Arrow's connections from the Paulson Living Trust (Madeline Paulson, Michael Paulson, Lenora Paulson) and assitant trainer Ginny De Pasquale. Owner Michael Paulson talked about how his father, the late Allen Paulson, won the inaugural World Cup with Cigar. He said, "My dad was a very quiet person, but you could just hear the excitement in his voice. Bringing Cigar halfway around the world at the invitation of Sheikh Mohammed, and winning, was very special. Cigar accomplished so much at the time. My dad was always one to step up to the challenge." Asked about how he was enjoying his first World Cup, Paulson added, "It's fabulous. We brought some friends with us and to just see the development in this place is amazing. The Jumeirah area, you can't describe it, you have to see it."

Right: South African trainer Mike de Kock has two entered in the main event, Asiatic Boy from post 9 and Lucky Find from post 10. He said, "When you look at the horses (Curlin) has run against and beaten, you know why he's rated as he is. He's comfortable on the (dirt) surface and he has experience at Nad al Sheba. Very difficult race for us. Asiatic Boy is much improved, but you saw in the Maktoum Challenge he got tired in the last 100 meters. I think he's got a big chance to be in the first three. I don't think I've ever had two such serious horses in with a chance. Rather me than someone else. I'm confident." 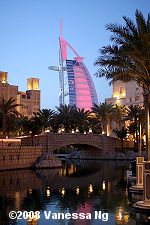 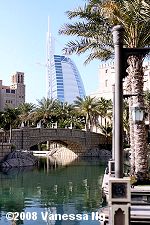 The post position draw for the Dubai World Cup was held at the Madinat Jumeirah Resort which is a gorgeous castle like building in a complex that includes the resort, shopping, and meeting facilities. Part of the facilities is the Burj Al Arab hotel, the world's tallest all suite hotel which resembles a sailboat and has any luxury you can imagine. Here are two views with the hotel in the background, one during the day and one at night. 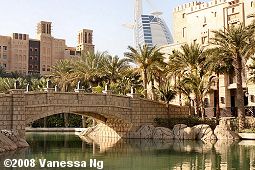 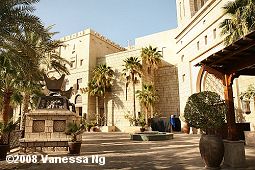 More scenic views of the lovely grounds at Madinat Jumeirah. In addition to the hotel, it also includes a shopping mall, resort, spa, and meeting facilities.