The first of two turf races on Dubai World Cup night is the $5 million Dubai Duty Free (G1), contested at a distance of 1777 meters (about 1 1/8 miles) at Nad al Sheba Racecourse, with a full field of sixteen runners entering the gate. Godolphin entrant Literato was sent off as the 3-1 favorite in the international pool, exiting three straight wins including the Champion Stakes at Newmarket. Tied for second choice on the board were 4-year-old filly Darjina, third in the Hong Kong Mile last time out, and the other Godolphin entrant, Creachadoir, who was second by a nose in the Hong Kong Mile.

36-1 longshot Jay Peg went to the lead soon after the start, and set a pace of 22.66, 47.16, and 1:11.61 over the good turf course while being stalked by 14-1 Floral Pegasus and 25-1 Seachange the whole way. Entering the stretch, Seachange moved up to challenge and took over the lead briefly, as a cavalry charge ensued. Darjina, who was 7th early, closed with a rush on the outside to take over the lead with a furlong to go, getting the mile in 1:33.28. However, early pacesetter Jay Peg, who stayed on the rail the whole way around, found another gear and came on again late to prevail over Darjina by just 1/2 a length in a new course record time of 1:46.20. It was just a nose back to 16-1 Archipenko who sat midpack early and closed well late. Favorite Literato raced in 13th early. Moved up to 7th at the top of the stretch, but faded in the final furlong to finish a disappointing 12th. 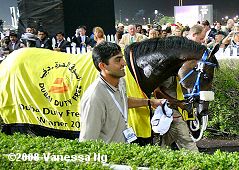 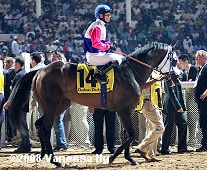 Left: Jay Peg heads to the barn in his winner's blanket.

Right: Jay Peg in the post parade. Winning jockey Anton Marcus said, "He likes a scrap and I wasn't worried when other horses went past him. I'm pleased that we had horses on either side of us. That really helped at the end. My saddle slipped 1 1/2 furlongs out and I was nearly unseated. It's a very proud day because my brother Basil used to train this horse and my older brother Selwyn owns a share." 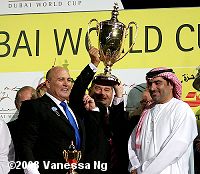 The trophy presentation with winning trainer Herman Brown on the left with the blue tie. Brown said, "I really didn't think they went that fast, but anyway it doesn't matter now. Some people were disappointed with his last run but I really could not split my runners and I knew this horse would fight when it came to a battle. He's kept improving and I think this shows that you've got to train a horse to peak on Dubai World Cup night and not for the beginning of the carnival. It's great for the owners also because if you convert this currency into our (South African) rand, it amounts to an awful lot." 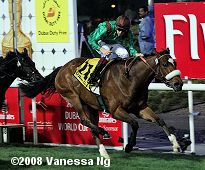 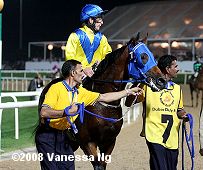 Left: Second place finisher Darjina crosses the finish line. Her jockey Christophe Soumillon, who seems to be looking over at winner Jay Peg, said, "She's given me a perfect ride but in the end she's really just 85% today and we'll see her at 100% soon."

Right: Third place finisher Archipenko. His jockey Kevin Shea said, "I never had a clean run at all, he just wouldn't go between the horses. Once he had a clean run he came good. He is very unlucky to lose, we should have won. We will win a big race with this horse."