The first Thoroughbred race on Dubai World Cup night is the $1 million Godolphin Mile (G2). A field of fourteen went to post in this 1600 meter (about 1 mile) event on the main track at Nad al Sheba Racecourse in Dubai. Godolphin entrant Elusive Warning was sent off as the 5-2 favorite in the international pool, exiting a win in the Burj Nahaar, the major local prep for this race. Stablemate Blackat Blackitten, second in the Burj Nahaar, and Diamond Stripes, fourth in the Sunshine Millions Classic last out but lacking a victory since the Meadowlands Cup in October, tied for second favoritism at 3-1.

14-1 Barcola and 33-1 Rosberg battled on the front end with Diamond Stripes early on, getting fractions of 24.85, 47.80, and 1:11.53 over the fast track, while Elusive Warning sat at the back of the field unhurried down the backstretch. Turning for home, Rosberg took over the lead and held it to the 1/8 pole but jockey Edgar Prado aboard Diamond Stripes was quickly closing the gap In the final furlong, Rosberg weakened badly while Diamond Stripes moved on to a 1 1/4 length victory in 1:36.96, easily holding off Elusive Warning who put in a very strong late rally. It was another 1 1/4 length back to late-running 100-1 outsider Don Renato third. 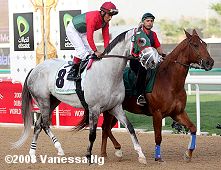 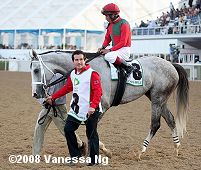 Left: Diamond Stripes in the post parade. Winning jockey Edgar Prado said, "The main thing was that he broke well and then I comfortably got him into the position I wanted to be. He always tries hard, he fought hard all the way and I was really proud of him." 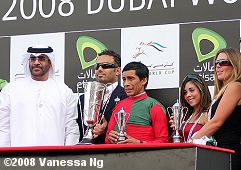 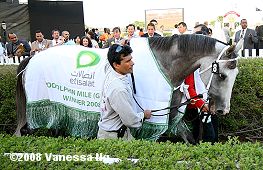 Left: Abbas Masri (left) of etisalat presents the trophy for the Godolphin Mile. Winning trainer Richard Dutrow Jr, who watched the race on TV from Gulfstream Park, said, "When he started coming back on the leader, I knew they were in trouble. When he starts coming on like that nobody is getting past him and, with no late comers, I knew they were in trouble. I think the one-turn mile was the thing that made the difference today. Now we have to think about the Met Mile. There aren't too many big handicap horses in the division this year. It looks like this is his distance. They always talk about having to wait with horses coming back from Dubai, but we'll see if the Met Mile would be about right."

Right: Diamond Stripes heads back to the barn with his winner's blanket. 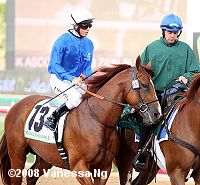 Second place finisher Elusive Warning in the post parade. His jockey Kerrin McEvoy said, "He got to the front at the 150m but then leveled out. I tried hard and did get a check shortly after the start which may have cost him the race." 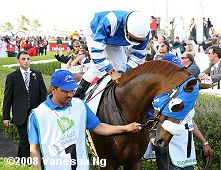 Third place finisher Don Renato in the paddock. His jockey Wigberto Ramos said, "My horse broke good but then he was a little too far back. When I started asking him he started moving very well. Then in the stretch I got into a little traffic so I started looking for my clear run but I never had a clean run. I had a lot of horse." 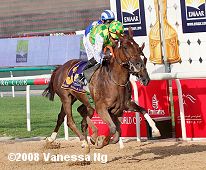 The first race on Dubai World Cup day is the $250,000 Dubai Kahayla Classic (G1) for Purebred Arabians, contested at the World Cup distance of 2000 meters (about 1 1/4 miles) on the main track. Madjani, who had won this race three years in a row, was looking to extend his streak to an unprecedented four straight. However, 6-year-old mare Mizzna, who was third last year, turned the tables on her rival, holding the defending champion off by 2 lengths at the line in a time of 2:14.30 over the fast track. Interestingly, Mizzna's dam Alanudd also won this race three years in a row starting in 1997.
Results Chart for the race from Emirates Racing Authority 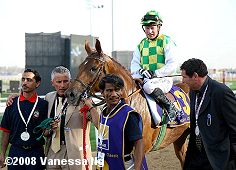 Mizzna heads for the winner's circle. Winning trainer Eric Lemartinel (beige suit) said, "I was confident she could win today as she's been going well all year and she keeps improving. She's much stronger and she's very relaxed. She'll be back to defend her crown next year I hope," Jockey Tadgh O'Shea added, "She was very good and very brave just like her mother. I hit a flat spot about five furlongs out but I let her have a breather and she really responded."