The $500,000 Man O'War Stakes (G1) is the richest of three Grade 1 events run on the opening Saturday of the Fall Championship Meeting at Belmont Park in New York. A field of seven older turf specialists contested this 1 3/8 mile trip over the Widener turf course, with Irish shipper Yellowstone sent off as the lukewarm 2-1 favorite coming off a second place finish in the Great Voltigeur Stakes at York after winning the Gordon stakes at Goodwood. Bowling Green winner Sunriver was the 5-2 second choice for trainer Todd Pletcher, after finishing a close fourth in the Arlington Million in his last start. 7-2 shot and well-traveled Doctor Dino rounded out the top three on the board, coming into this event off of three straight third place finishes in Group or Grade 1 company.

Yellowstone opened up a 1 1/2 length lead on the clubhouse turn getting a quarter in 24.93 while saving ground on the hedge before Sunriver moved up alongside him to take a short lead from the outside. The pair set easy fractions of 49.39, 1:13.34, and 1:36.60 before Yellowstone tired and faded to an eventual sixth place finish. Sunriver led the field in midstretch getting 1 1/4 miles in 1:59.91, but Doctor Dino, who had stalked the pacesetters in fourth early, moved up alongside him. After a brief duel, Doctor Dino dug in and pulled ahead inside the 1/16 pole and held off Sunriver by a head to get the victory in 2:12.26 over the firm going. It was a long 3 1/4 lengths back to 8-1 Grand Couturier in third. 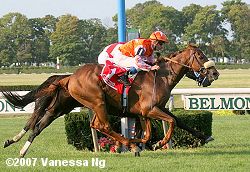 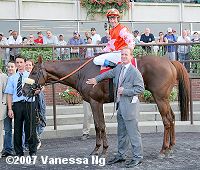 Doctor Dino in the winner's circle. His trainer Richard Gibson said, "He's been our flag-bearer all year. He's been on two big podiums this year, and he really did get to the top of the podium today. He's a model of consistency. He missed out on two big pots by very short distances. Today's our day. It gets your guts going a bit, when you see how many good horses have won this race. It's a privilege to be associated with this race. The Breeders' Cup is very unlikely; he's not nominated. We'll speak to the owners, but before the race it was never an option. We always thought we would give him a break and prep him for the big Group 1's in Hong Kong. Coming off the last turn, I was sure we were going to win. I always thought he was going to chase down the leader. He'll stay here until Monday, and go back to Chantilly (France)." 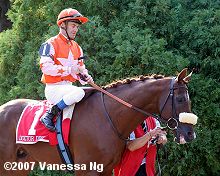 Doctor Dino heads out for the post parade. His jockey Olivier Peslier said, "We had a good trip. The pace was not very fast. I followed the pacemaker down the backstretch. Just before the last turn, I moved on the outside. He's handy and he's got a good turn of foot, and now, he's got experience. It was a good race and a good fight. I was sitting well and I knew I had horse." 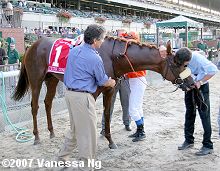 Doctor Dino's connections didn't know the procedure at Belmont and immediately unsaddled him and started to head back to the barn without going down Victory Lane or into the winner's circle. Here his groom give him a kiss as Olivier Peslier prepares to remount after he was resaddled so they can do those things. 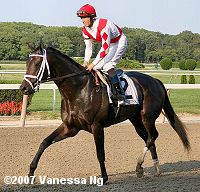 Second place finisher Sunriver returns after the race. His trainer Todd Pletcher said, "He ran really well. The stalking position was not really where we expected to be. He showed he could adapt to that scenario. We'll see how he comes out of it. We know he likes firm ground. With the Breeders' Cup a lot of it could depend on the weather."

Jockey Garrett Gomez added, "Johnny (Murtagh, aboard Yellowstone) tried to quicken the pace at the 5/8 pole. When I asked my horse to make his move and put his body into it, he did. He is a really nice horse. He got beat by him (previously) a half-length and a neck. He pretty much had to sprint 5/8 of a mile." 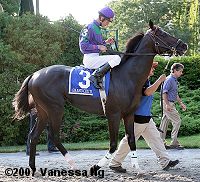 Third place finisher Grand Couturier heads out for the post parade. 8-1 fifth choice Grand Couturier came into the race off a win in the Sword Dancer at Saratoga. He raced at the back of the field early saving ground on the clubhouse turn under jockey Calvin Borel, then came out wide into the stretch and closed well down the center of the course to get third place money. The English-bred improved his record to 5 wins, 0 seconds and 4 thirds in 12 career starts with earnings of $547,205 for owner Marc Keller and trainer Robert Ribaudo. 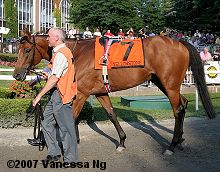 Beaten favorite and sixth place finisher Yellowstone in the paddock. His jockey John Murtagh said, "He was never comfortable today, at any point. I was beaten from halfway down the backstretch. The second horse (Sunriver) is a big horse and he was kind of afraid of him."