The longest race on Cathay Pacific Hong Kong International Races day is the Hong Kong Vase (G1), and although it isn't the richest race on the card, it arguably was the main event at Sha Tin given the quality of the field. A field of 13 faced the starter in this 2400 meter (about 1 1/2 mile) turf event with a purse of $14 million HK (about $1.8 million U.S.) Prix de l'Arc de Triomphe winner and European Horse of the Year Dylan Thomas was sent off as the 7-10 favorite over 6-1 second choice Red Rocks, winner of the 2006 Breeders' Cup Turf. Man O'War Stakes winner Doctor Dino rounded out the top three on the board at 8-1.

When the gate opened, jockey Darren Beadman sent 22-1 Viva Macau right away and he led the field first time past the stands with 48-1 Hawkes Bay and 29-1 Bussoni stalking the pace around the clubhouse turn through an initial quarter in 25.90 seconds. Entering the backstretch, Viva Macau continued the lead through a half in 51.20, before allowing 23-1 Macleya to take over the lead midway down the backstretch and into the far turn, through 3/4 in 1:16.60 and a mile in 1:40.80. At the top of the stretch a cavalry charge ensued, as the pacesetters were quickly left behind. Bussoni, who was always in contention, made his move early and took over the lead at the 3/16 pole, getting 1 1/4 miles in 2:04.80. However, Doctor Dino, who was well back early, came out wide at the top of the lane under jockey Olivier Peslier and closed with a rush, taking over the lead inside the 1/8 pole and drawing off to win by 1 1/2 lengths over 9-1 Quijano in a time of 2:28.20 over the good turf. It was another 1/4 length back to Bussoni in third. Favorite Dylan Thomas raced far back early and showed no rally late in the final race of his career, finishing seventh beaten just 4 3/4 lengths at the line. 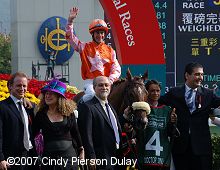 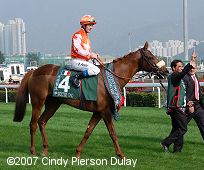 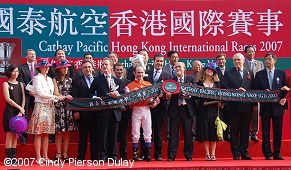 The trophy presentation ceremony for the Hong Kong Vase. His trainer Richard Gibson said, "We've always had positive vibes about him this week but you need luck in running and things didn't look too good early in the straight. But when you have the likes of Olivier Peslier riding for you then you don't worry. We had become sick of running well in big races around the world but in the last two months he has won two Group Ones and since, this was his first time over 1 1/2 miles, who knows what's next? Running in events like this is the reason one gets up in the morning and this is absolutely great. Racing is a team effort and I want to thank all my staff for bringing about such a great result, especially to his work rider Eric Gandon who looks after him with such enthusiasm." 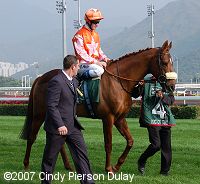 Doctor Dino in the post parade. His jockey Olivier Peslier said, "I was fourth early but there was no pace and when the others were coming past me on the outside there was no way out.  So I had to be patient and stay on the rail. He showed a great turn of foot and when he got out I knew he'd win. The horse's win today was down to the trainer who's done a great job with him. It's his first time at 12 furlongs and we came here rather than Japan because this is a flatter track and an easier trip." 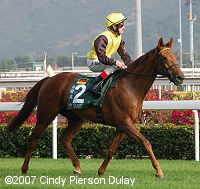 Second place finisher Quijano returns after the race. His jockey Andrasch Starke said, "I had a good position early but was then taken back. I was checked three times and if I could have got out then I think he could have won." 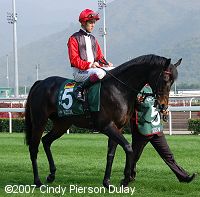 Third place finisher Bussoni in the post parade. His jockey Christophe Soumillon said, "He's run a great race and I've no complaints. The best horse on the day won." 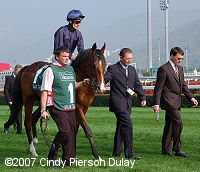 Seventh place finisher and beaten favorite Dylan Thomas in the post parade. His jockey John Murtagh said, "We missed the start and he was back too far and there was no pace. We had a problem when Mr. Peslier came out on us in the straight but anyhow he had no gas."

His trainer Aidan O'Brien said, "It's the end of long hard season and he got caught in quarantine for a long time. He was as big as a bull and, although we tried, we couldn't do too much about it. He's probably the best horse we've had and it's a great credit to all the lads who've kept him sound."