Douglas Whyte, the leading rider in Hong Kong for the last seven seasons, won the 10th annual Cathay Pacific International Jockeys' Championship on Wednesday night, his second title in the prestigious contest. He won the first leg aboard the appropriately named Champion Lad at Happy Valley Racecourse in Hong Kong, before a crowd of 20,579. He then finished third in the second leg, and was fifth in the third and final leg, earning him a total of 18 points. European jockey Christophe Soumillon, who won the second leg and was fourth in the third, took second place with 15 points, edging Australian jockey Damien Oliver's 14 points, winner of the third leg. Each race awarded 12 points for a win, 6 for second, 4 for third, 3 for fourth, and 2 for fifth. Jockeys are assigned their mounts randomly with the races run as handicaps. Canadian jockey Emma-Jayne Wilson, the first female rider to participate, finished tied for sixth place with 6 points, earned when she finished second in the second leg. American rider Richard Migliore tied with defending champion Olivier Peslier and Ryan Moore in last place with zero points.

South African-born Douglas White has been champion jockey in Hong Kong for the last 7 seasons and is on pace for a record eighth crown this term. After Wednesday night's card he was 1 race away from breaking Tony Cruz's Hong Kong record of 946 career wins, and his 114 wins during the 2005-2006 racing season broke his own record in that category. His Group 1 victories include the Hong Kong Gold Cup and Hong Kong International Vase (aboard Indigenous), QEII Cup (London News and Oriental Express), Chairman's Prize (Oriental Express), Centenary Cup (Best Of The Best) and Stewards Cup (Armada).

An ecstatic Whyte said, "It is a great honor to represent Hong Kong and you have to be sharper than ever when competing against these jockeys. I've won this Championship before but it's been a while and what a day to draw level with Tony Cruz. I hope I'm not putting the mockers on it but the chance I can go ahead on Sunday, with everybody there, will be absolutely amazing. There was no better way to level it than winning on one of John's (Size) horses, who has been such a supporter and friend."

Belgian native Christophe Soumillon won the French Derby at the age of 20 and was later retained by the Aga Khan for whom he won the French Derby and Prix de l'Arc de Triomphe aboard Dalakhani in 2003. The three time Champion Jockey in France is remembered in North America for winning the 2005 Breeders' Cup Turf on Shirocco. He tied for the win in the Cathay Pacific International Jockeys' Championship in 2004 and voted Most Popular Jockey in 2005/06 by local fans. He has won five Group 1 races in Hong Kong, including the Hong Kong Derby in 2006 on Viva Pataca. 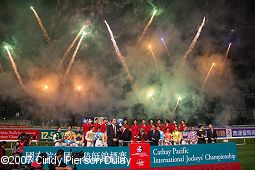 Fireworks lit up the Happy Valley infield at the opening ceremony for the Jockey Challenge while all the participants watch on stage.

The winner receives a trophy, a silver whip and cash prize of HK$200,000 while the runner-ups get a silver dish and a cash prize of HK$100,000. Here is the trophy celebration with all the participants posing together on stage. 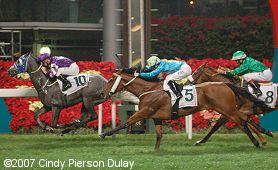 The finish of the second leg with Christophe Soumillon aboard winner Super Surprise, defeating Emma-Jayne Wilson aboard Vincere on the outside and Douglas Whyte aboard third place finisher Vintage Gold on the rail. Soumillon said, "I am really happy with that. It's a great experience to compete against some of the best jockeys in the world. I thought I had a strong chance in the first race but you need a horse with a small action to go around this tight track. I have won this competition before and it's been great to compete again." 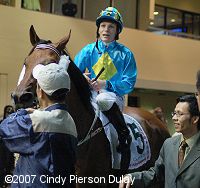 Canada was proudly represented by Emma-Jayne Wilson, who is seen here aboard Vincere in the paddock after finishing second the second leg of the International Jockeys' Championship. She said afterward, "The whole night was amazing and I was flattered to be here. That was excellent, an absolutely wonderful night and I think the experience will do me a lot of good." 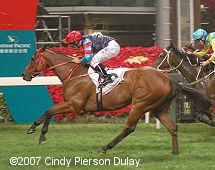 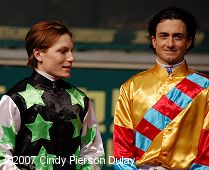 Emma-Jayne Wilson, the first female jockey to be invited to the International Jockeys' Championship, and eventual champion Douglas Whyte stand together at the opening ceremonies. 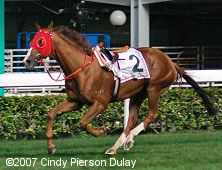 Eventual third place finisher Damien Oliver was dumped by his mount Classa Win in the first leg, who ran loose on the track afterward and finished the distance, as seen here. Getting no points for this race cost him at least a second place finish.