The Cathay Pacific Hong Kong International Races mark the end of the international calendar for flat racing, with four Group 1 events, all for older horses at weight-for-age conditions, contested over the turf at Sha Tin Racecourse. Over 51,000 fans were in attendance and racing conditions were ideal, with cloudy skies, temperatures in the high 60’s, and the turf course rated "good to firm." The highlight race of the card is the HK$20 million (about $2.6 million US) Hong Kong Cup (G1). A field of twelve went to the gate in this 2000-meter (1 1/4 mile) event, with local hope Hello Pretty sent off as the 2-1 favorite over French mare and second choice Pride at 5-2, who was making her final career start after finishing second in the Prix de l'Arc de Triomphe last time out. Defending champion Vengeance of Rain was the 4-1 third choice.

High Intelligent and Growl battled on the front end in the early stages through easy fractions of 26.00, 50.20, and 1:15.00 while being stalked by Hello Pretty the whole way. Pride raced near the back of the pack down the backstretch. At the top of the stretch, Vengeance of Rain found room and surged to the front to take a short lead, but Christophe Lemaire took Pride out wide and she easily passed the defending champ inside the 1/8 pole. She looked home free but Japanese horse Admire Moon, who had raced next to last early, was gaining with every stride. The pair hit the wire together, but the photo determined that Pride held off Admire Moon to get the win, in a time of 2:01.60. It was another 2 lengths back to Vengeance of Rain in third, while favorite Hello Pretty showed nothing in the stretch and faded to eighth. 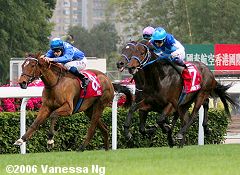 Coming down the stretch with Pride out front with Admire Moon and Vengeance of Rain behind her. Winning jockey Christophe Lemaire said, “When it came to the last corner I was behind Alexander Goldrun. She helped me in to the race but unfortunately we had to come a little bit early. She has a great turn of foot, but her run is quite short so she was stopping a bit for me at the end and I was frightened we might get caught. She has that very special fighting spirit that got her home." 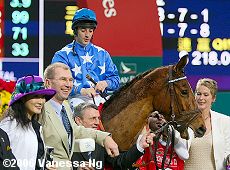 Pride in the winner's circle. Winning trainer Alain de Royer-Dupre said, "She is a marvelous filly with a brilliant turn of foot. Today is a special story in a long career. We have a new system of keeping three great fillies going and today all three are retiring. As for me, I will have to find another one.” 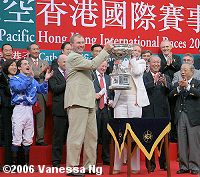 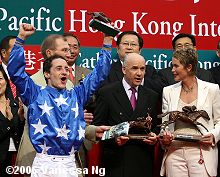 The Hon. Rafael Hui Si Yan, Chief Secretary for Administration of the HKSAR and an Honorary Steward of the HKJC, presents the Cathay Pacific Hong Kong Cup to the owners of Pride. Winning owner Sven Hanson said, "It was a great win today, but that is definitely the end of her career. Enough is enough. I don't want to take any more risks." 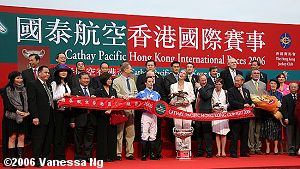 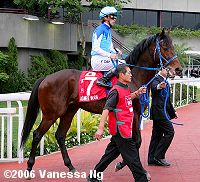 Second place finisher Admire Moon heads to the track before the race. His jockey Yutaka Take said, "I had him settled well. He didn't jump from the gates too smoothly so I had him at the back and he quickened very well in the stretch. It was a great run but I'm very sorry to finish so close. He's still only a three-year-old colt so he is something to look forward to for the future." 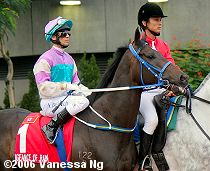 Third place finisher Vengeance of Rain heads to the track. His jockey Anthony Delpech said, "I had to come out at the 1000 meter mark because another horse was coming back on me. Anyway he's run his heart out today but the other two were just too strong."