It was a busy morning at Sha Tin Racecourse on Thursday as most of the contenders for the Hong Kong International Races were on the track for some maintenance work prior to the post position draw held later in the day. Some rain fell early on, but the dirt track remained fast and the turf course was good to firm. 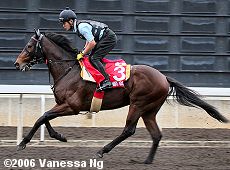 Hong Kong Cup contender Admire Moon will break from Post 4 in Sunday’s Hong Kong Cup. He galloped an easy quarter mile in 24.6 seconds. Trainer Hiroyoshi Matsuda said, "He is really relaxed and in good form. He did not gallop full speed today but he liked the dirt track. He will be out on the turf course on Saturday to set him for the race. I think the turf course will suit him. The draw in four is also good. He is ready for the race." 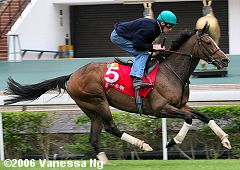 Alexander Goldrun went out for a gallop in preparation for the Cup when she will break from the 10 hole. Trainer Jim Bolger said, "She seems keen and sharp and fresher after a longer break this year and I'm confident that she is as well as ever in herself. She is very sound, has a great constitution and a great temperament and that's why she's still at the top of her game.” Jockey Kevin Manning added, "I'm very happy with her. She moved well and felt good to me. You can throw out her last run at Newmarket, it was over a mile, which is too short for her and the ground was all against her that day as well." 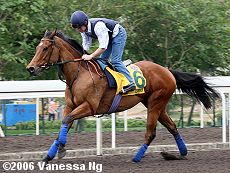 Hong Kong Sprint contender Benbaun drew post 3. Trainer Mark Wallace said, "I think he is as well as I've had him and we just need a good draw - he has only run round a bend once, in Japan, where he finished fifth, and he was unlucky that day, though we would not have beaten Takeover Target." 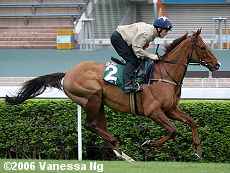 Canadian International winner Collier Hill will break from the outside post 10 in the Hong Kong Vase. Jockey Dean McKeown said, "There must be a good chance that Ouija Board is a bit tired now. And we've beaten her before in Dubai. My horse becomes a champion when he travels abroad - he even changes color into a deep chestnut. I knew we would win the Canadian International last time and I think we are the horse to beat on Sunday." 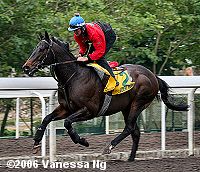 Sprint contender Desert Lord drew the 4 post. Trainer Kevin Ryan said, "I wanted the draw to be from gate one and six so I couldn't ask for better than that. The horse looks marvelous. He has had an uninterrupted preparation and has settled in and eaten well. He is very quick but I am sure the 1200m will be no problem. He is uncomplicated and I would like to think he gets a breather around the bend. He never looks like stopping so the long straight shouldn't hold any fears." 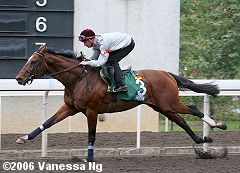 Vase entrant Egerton went out for a gallop on the dirt Thursday morning, and will break from the 7 hole Sunday afternoon. Jockey Torsten Mundry said, "If he can finish in the first five it will be a good run." 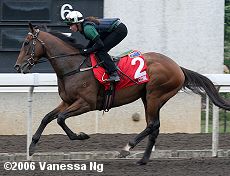 Growl, Australia’s hope in the Cup, drew post 7. Trainer David Hayes, "I can assure you this horse is as well as he can possibly be. But as to whether he can win, I really don't know. This year the Cup looks particularly strong and racing right-handed is foreign to him but I'm confident that he is much better than his last performance (2nd in the Mackinnon Stakes) and I think he can easily run in the first three." 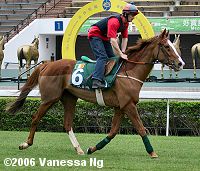 Vase entrant Kastoria drew the rail. Jimmy O'Neill, head lad to trainer John Oxx said, "The work there was fine. Mick Kinane will be on her tomorrow on the turf to stretch her legs and John Oxx will be here as well. I know she disappointed a bit in Canada but the ground there was very soft and the only other time she was below par was on a similar surface. She will love the going here and she seems very well to me." 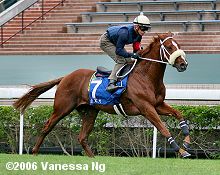 Mile entrant Linngari is the lone South African horse on Sunday and he will break from the 13 post. Trainer Herman Brown said, "I'm not happy with that draw at all. It forces us to sit and ride more of a waiting race and to try and run them down in the last 200m." 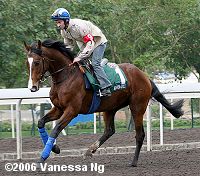 Maraahel drew post 9 for the Vase. Jockey Richard Hills said, "He can be a bit of a fidget in the stalls but if things go okay there I would like to have him sitting in midfield. He ran a fantastic race a year ago (third to Vengeance Of Rain in the Cup) and he's in top form. He's an old hand at this game." 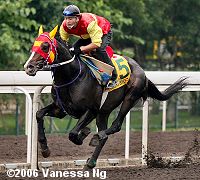 Japanese Sprint contender Meisho Bowler will break from post 7. He blew out a quarter mile in 21 seconds flat on the dirt track Thursday morning. Jockey Yuichi Fukunaga said, "He is sometimes reluctant to work, but he wasn't like that this morning. Everything is set for Sunday and he really is in good form. He is very consistent. I know for Japanese runners, this is the most difficult race to win, but it suits us now that the race is over 1200m around a bend. We have a big chance." 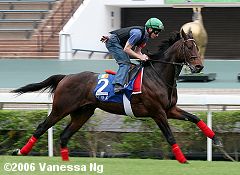 Mile entrant Mustameet drew post 11. Trainer Kevin Prendergast said, "I saw him for the first time since he left home this morning and I was very happy with him. He is a bit more mature than some of the ones he will be taking on here and he has taken the travel and settled in nicely. That's half the battle because otherwise you've lost before the race is run." 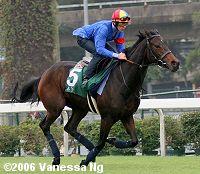 Ouija Board, Cartier Horse of the Year and two-time Breeders’ Cup Filly and Mare Turf winner, makes her final career start in the Vase, breaking from post 2. On Thursday morning she worked 1/4 mile in 22.8 seconds with jockey Frankie Dettori up. Trainer Ed Dunlop said, "No problems there with the draw and I can tell you that Frankie said she was awesome this morning so that's good enough for me. The signs are good. Her bodyweight is right and I just hope that it's not one race too many. We would like a good pace. Sha Tin's mile-and-a-half is easier than the one in Tokyo and Frankie rides it brilliantly." 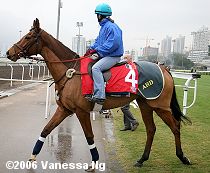 Pride will break from post 9 in the Hong Kong Cup on Sunday. Jockey Christophe Lemaire said, I just hope it won't be a slow pace and a tactical race as she can be a bit fresh and it could cause problems. But she knows this place, has had a great season and has got a big heart. I cannot say she is the best I have ever sat on because I've ridden some great horses like Heart's Cry and Divine Proportions over different distances. But she's retiring and I'm going to miss her an awful lot. Like Ouija Board, she is a star and she is good for racing in general." 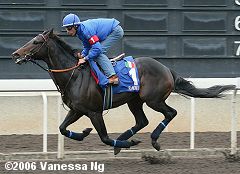 Ramonti flies the colors of Italy in the Mile on Sunday, drawing the 12 post. Jockey Endo Botti said, "We are going to go on with him but he doesn't have to lead. As long as he is relaxed near the front it's okay." 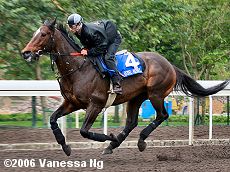 The lone American horse in the Hong Kong International Races is Rebel Rebel who drew the 3 post for the Mile. He comes into this race off a ninth place finish in the Morvich at Santa Anita, after a second place finish in the Woodbine Mile. His only win this year was in the Poker Handicap at Belmont. 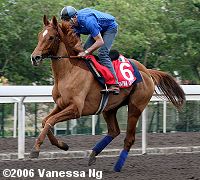 Hong Kong Cup hopeful Satwa Queen drew post 5. Trainer Jean de Roualle said, "She took a little time to get over her trip back from the Breeders' Cup and lost a bit of weight and was very flat for a week or so. But then she started to pick up again very quickly, and when we got the invitation to Hong Kong I was able to start training her again. She's fairly easy to keep fit. She had her last piece of work before she shipped and will just canter between now and the race on the all weather, she doesn't need a turf gallop." 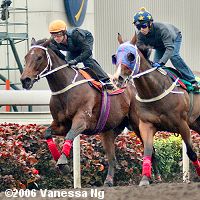 Local hero Silent Witness (inside) works in company with stablemate Regency Horse (outside) in preparation for his start in the Sprint. He galloped a 1/4 mile in 21.6 seconds, and breaks from the 2 hole on Sunday. Jockey Felix Coetzee said, "You can't ask for any more than that." Trainer Tony Cruz added, "The horse is healthy and I still think he has got what it takes and he can win this race again. He's a big, gross horse, and the more you train him, somehow the more weight he puts on - but you have to live that. The main thing right now is that he's healthy."