Saturday morning was the last opportunity for Cathay Pacific Hong Kong International Races entrants to take to the track in preparation for their Group 1 stakes races. The exception was Ouija Board, who, after a trip to the trotting ring on Saturday morning, went out again on Saturday afternoon for a gallop on the turf with Frankie Dettori aboard, this time under the watchful eyes of the veterinarians after a suspect exam after the morning trot. Unfortunately she was found to be sore in her left front leg, the same leg she had injured in 2005, and so the decision was made by trainer Ed Dunlop and owner Lord Derby to scratch her from the Vase and retire her. Dunlop said, "She was still slightly sore on her left leg, the same one she injured in the (2005) Prince of Wales's Stakes (G1) at York. She must have jarred it working here on either the dirt or the turf, so after consulting my own vet, the Hong Kong Jockey Club vet, and Lord Derby, we all agreed enough was enough. It's a very, very sad ending to her career. It's been an emotional day for everyone and for the whole team who has put in such a huge effort." 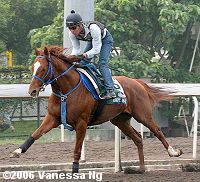 Japanese Vase contender Admire Main went out for an easy gallop on the dirt track. Trainer Mitsuru Hashida said, "He looks great and is in great form. I have no worries about him." 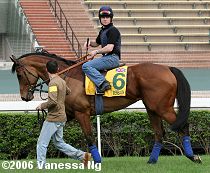 Sprint entrant Benbaun was also out for a last-minute canter before the big day. 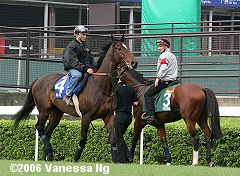 Mile contender Rebel Rebel and Vase contender Egerton cross paths on the track Saturday morning. The only American entered on Sunday, Rebel Rebel went out for a final gallop while watched by trainer Richard Dutrow. Dutrow said, "He's been doing really well of late both back home and out here. A one turn mile is his game, and I truly think he's a live chance on Sunday." 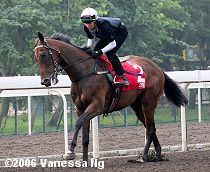 Growl, the Australian representative in the Cup, was out Saturday morning. Trainer David Hayes said, "His work has been great all week and when you travel a horse that's the sort of positive sign you look for. He's done well and that's half the battle." 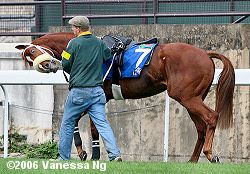 Lingari, the South African entrant in the Mile, was out for a final tune-up for Sunday's Mile. 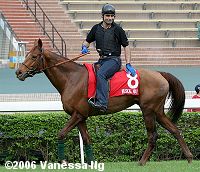 One of two French horses in the Cup, Musical Way, also was out Saturday morning. 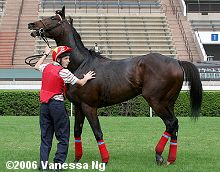 Mustameet, the lone Irish horse in the Mile, came out for a gallop in preparation for Sunday's race. 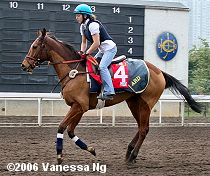 Pride, the other French horse in the Cup, came out as well for a gallop. 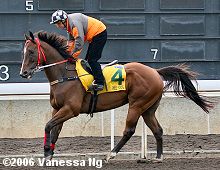 Australian hope in the Sprint, Red Oog, was out on Saturday morning. Trainer Joe Pride said, "He's never won two races in a row in his life so perhaps the interference he suffered last start was a blessing in disguise. Some of the best runs of his career have come off the back of a soft run. He's racing the Sydney way (right-handed) at his favourite distance and the weight-for-age scale suits. He's been prepared well, now it's in the hands of (jockey) Hughie Bowman and the Gods." 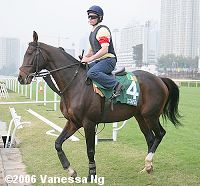 Scorpion went out for a canter on the turf Saturday morning. Jockey Seamus Heffernan said, said: "I think we will get into the money. He's in good form and I think he is getting better with age. He was quite a weak three-year-old but he is stronger now and ran a good race in America. Surprisingly, for a horse by Montjeu, he will like the ground at Sha Tin as he has a fast ground, quick action." 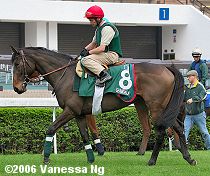 Shamdala represents France in Sunday's Vase. She was out for a canter on Saturday morning.