French veteran jockey Olivier Peslier took home the 2006 Cathay Pacific International Jockeys' Championship despite not having a mount in the third and final race of the challenge due to a late vet scratch. He finished fifth in the first leg and won the second leg to finish with 14 points overall at the event at Happy Valley Racecourse in Hong Kong. Australian Glen Boss and German based Andreas Suborics tied for second with 12 points and a win each. Boss won the first leg and was 11th in the second while Suborics won the final leg after placing 12th and 10th in the first two. Japanese jockey Yutaka Take also had 12 points, but was placed fourth since he didn't win any races. Each race awarded 12 points for a win, 6 for second, 4 for third, 3 for fourth, and 2 for fifth. The only North American jockey participating was Javier Castellano who tied for last place with zero points.

Olivier Peslier has participated in the Jockeys' Championship more than any other jockey at eight times total and won the inaugural edition in 1998. He has been the French champion jockey four times and has had much success overseas and regularly rides in Japan during the winter season. He has won four Cathay Pacific Hong Kong International Races in the past, including the Vase last year, and is a two time winner of the Japan Cup. He has also had success in North America, winning the 2001 Breeders' Cup Filly and Mare Turf and finishing second and third in the 1995 and 1996 Breeders' Cup Turf. In his native France, he is a three-time winner of the Prix de l'Arc de Triomphe.

A thrilled Peslier said, "It was hard to sit out the last race without a ride but luckily the jockeys behind didn't do well. Hey...it's great to have my name on this trophy again and for sure I will be back to defend this title."

Glen Boss has been the most successful Australian big race jockey of recent years, including being the regular rider of three-time Melbourne Cup winner Makybe Diva. This is despite terrible injuries during a 2002 fall in Macau that nearly ended his racing career. Andreas Suborics is Austrian-born but races in Germany where is is on track for a thrid champion jockey title this year. He was second in the International Jockeys' Championship in 2002 and has had much success overseas with wins in the Audemars Piguet QEII Cup, the Singapore Cup, and the Arlington Million in 2001. Yutaka Take is a past winner of the International Jockeys' Championship and has been the champion rider in Japan 16 times. He has won over 2500 races including all the big races in Japan and took the Japanese Triple Crown last year aboard Deep Impact.

The winner receives a trophy, a silver whip and cash prize of HK$200,000 while the runner-ups get a silver disn and a cash prize totalling $100K. To the right are the three top jockeys from left to right: Glen Boss, Andreas Suborics, and Olivier Peslier. As they were posing with the giant checks, Suborics joked around, trying to swap his $50K check for Peslier's $200K check as you can see in the photo.

All the jockeys who participated at the trophy presentation after the competition with the winners out front. 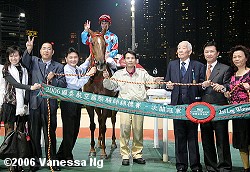 French jockey Olivier Peslier in the winner's circle after taking the first leg of the 2006 Cathay Pacific International Jockeys' Championship aboard Classa Supreme. Notice how different they do the winner's circle presentation in Hong Kong from how we do it in North America. 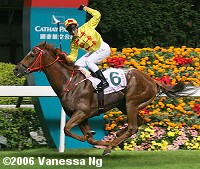 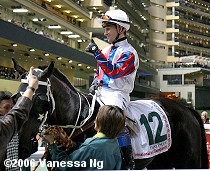 German-based jockey Andreas Suborics celebrates his win in the third and final leg of the 2006 Cathay Pacific International Jockeys' Championship aboard Fortunate Warrior. 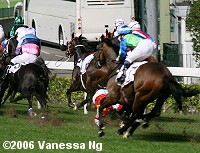 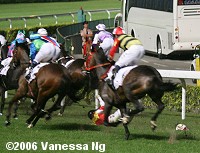 The final leg of the competition was marred by a nasty spill for the Hong Kong competitor Eddie Lai when his mount Carriso Creek unseated him. Here is a sequence showing the fall and the medics checking him afterwards. He was conscious and seemed to be only battered and bruised thankfully. His mount went on to finish the race and was OK. 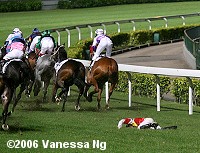 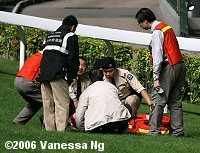 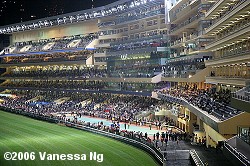 The huge grandstand at Happy Valley Racecourse full of fans. Happy Valley only races at night and is surrounded by tall buildings since it is in the city, very different from North American tracks which usually are outside of town or in residential areas. 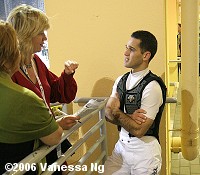 The lone North America representative was New York-based Javier Casellano. Here he is being interviewed by the media before the races. Unfortunately he did not fare well in the competition and scored zero points, finishing ninth in the first 2 legs and 10th in the final leg.