The unofficial middle-distance championship of Europe is decided on the first Sunday in October in the Prix de l'Arc de Triomphe (G1), a 2400 meter (about 1 1/2 mile) trip around one turn of the "Grande Piste" course at Longchamp in Paris for a purse of $2 million Euros (1 Euro = $1.27 US). Sunny skies and brisk wind helped dry the course after rain earlier in the week, with the course rated "good".

Despite a short field of just eight horses (including 1 mare), the smallest field since 1941, the quantity was more than made up for by the quality of the entrants. Deep Impact shipped in from Japan undefeated this year and was sent off as the prohibitive 1-2 favorite off a career record of 10 wins in 11 starts with 1 second and earnings of over $9 million, albeit in restricted Japanese competition. In to challenge the invader was 4-1 second choice and defending champion Hurricane Run, one of three horses in the field trained by Andre Fabre. This year he won the King George and Queen Elizabeth II Diamond Stakes at Ascot and was second in the Prix Foy last time out. The Prix Foy winner, and the 9-2 third choice in the Arc, was none other than Shirocco, another Fabre trainee, who is best known in America as the winner of last year's Breeders' Cup Turf at Belmont Park. He also won the Coronation Cup and the Jockey Club Stakes, and has been undefeated in his last 4 starts including the Turf. Andre Fabre also entered 24-1 outsider Rail Link, winner of the Prix Niel and the Grand Prix de Paris.

92-1 longshot Irish Wells took over the lead soon after the start, and he set a slow but respectable pace down the backstretch with Deep Impact stalking him to his outside and Shirocco settling just in behind those two in third. Hurricane Run sat back in fourth in traffic with the late closers. The front threesome made all the running around the turn and into the stretch. At the 1/4 pole, Irish Wells faded from contention, allowing Deep Impact to take a brief lead with local hope Shirocco still looming large as the pair looked to be in control of the race, while jockey Kieren Fallon was desperately looking for running room for a boxed in Hurricane Run. 24-1 longshot Rail Link, who raced in mid-pack fifth early, came out wide and was closing well on the leaders, as was the 6-year-old mare and 22-1 shot Pride, who was last early and was angled out to the center of the course for her run. In the final furlong, Shirocco tired from the early pace and faded badly to eventually finish last. Deep Impact fought gamely but had nothing left for the end, as Rail Link ran right by him at the 1/16 pole and then was all-out to hold off the late-closing Pride to win by a neck in a time of 2:31.70. It was just 1/2 a length to favored Deep Impact, who was 2 1/2 lengths clear of Hurricane Run in fourth.
Results chart with a link to the photo finish shot from Paris Turf
Results chart from Sporting Life 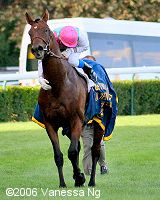 Jockey Stephane Pasquier hugs Rail Link after the race. He said, "It is important for me to thank the Prince and André Fabre for their confidence. Only one month ago in Deauville, I was on the sidelines because of my hand but above all I was depressed. And today, I've won the Prix de l'Arc de Triomphe with Rail Link! It was rather like David against Goliath. Now I'm pleased to have taken two months' rest! I am sorry for the Japanese but I hope that they'll come back." 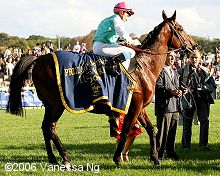 Rail Link parades for the fans after the race. Winning jockey Stephane Pasquier said, "André Fabre didn't give me any orders. He told me to ride the horse as I found him and to try and get the best possible trip. I took a position just behind Deep Impact and did not feel any pressure as I was riding an outsider. When I extracted my horse from behind Deep Impact he burst into action. I only realized that I had won when we passed the post but I still haven't grasped what this win really represents. I'll really appreciate it when I have the time to relax." 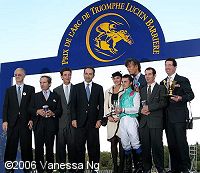 The trophy presentation with trainer Andre Fabre second from the left. Lord Grimthorpe, racing manager of winning owner and breeder Khalid Abdullah (Juddmonte Farms) said "He has probably done enough for this year and it is very unlikely that he will run again. The Breeders' Cup is possible but very unlikely. I was very hopeful beforehand but when one has a runner in the Arc de Triomphe one cannot be sure of winning, especially as Rail Link is backward and he had an unusual beginning to his racing career, as his jockey fell off. This is a great success for Juddmonte as we have his sire Dansili and above all two generations on his dam's side." 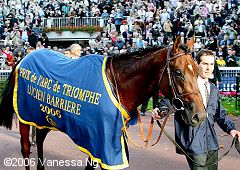 The crowd watches as the 2006 Prix de l'Arc de Triomphe winner is led back to the barn after the race. 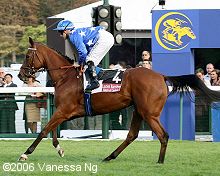 Second place finisher Pride warms up before the race. Her owner Sven Hanson said, "I'm thrilled and disappointed at the same time, and also very proud of Pride. She retires at the end of the season but we'll see how she comes out of this race before she runs again, which could be in Hong Kong or in Japan." Jockey Christophe Lemaire added, "I am sorry that the ground was not softer as that would have been an advantage for her. She's a mare who has to wait near the rear. I would have preferred to stay behind Rail Link in the back straight but I had to take a pull as Sixties Icon was on my outside pushing me in. She showed a long acceleration and kept going, not losing out by far." 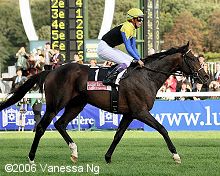 Third place finisher and beaten favorite Deep Impact returns after the race. His jockey Yutaka Take said, "He was tense in the first part of the race and was pulling. That is the reason why he did not show his usual acceleration. In Japan, races are run at a much faster pace and he is not used to this style of racing." 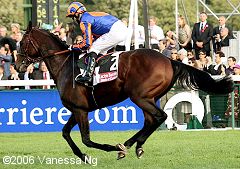 Fourth place finisher Hurricane Run takes off after the post parade. His jockey Kieren Fallon said, "We were beaten by the ground, not by anything else. It is nothing to do with the incident a furlong out, that changed nothing. The horse did not pull but didn't relax. He needed a stronger pace." 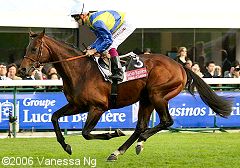 Last place finisher and another of the favorites Shirocco in the post parade. His jockey Christophe Soumillon said, "I can't explain the reason why he was less reactive than usual when accelerating. At the entrance to the straight I already felt that he would have trouble accelerating and in effect he soon weakened. He remains a great horse and I hope he will show that before the end of the year." 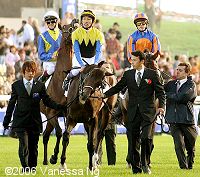 The top three favorites for the Arc in the post parade with Deep Impact in front, Shirocco behind him on the left and Hurricane Run behind him on the right. They do not do post parades like in North America, but instead lead them out for a short way then let them go where they take off like bullets. If you want to learn about some of the differences between racing in North America and France, check here.