The HK$12 million (about $1.6 million US) Hong Kong Sprint (G1) is the second event of the Cathay Pacific Hong Kong International Races. It had been run over a 1000-meter (about 5 furlong) straightaway since its inception, but this year the event was extended to 1200 meters (about 6 furlongs) around one turn of Sha Tin Racecourse. Originally 14 horses were drawn, but Takeover Target was scratched the day of the race for failing a drug test. Sunny Sing was set off as the 8-5 favorite over 4-1 second choice Down Town. Absolute Champion was the 5-1 third choice and 2004 winner Silent Witness was 6-1, showing that the local fans, 51,000 strong, were heavily backing their hometown heroes at the windows.

40-1 Natural Blitz and 30-1 Desert Lord battled up front down the backstretch and around the turn through a quick initial quarter in 22.90. Silent Witness sat in midpack saving ground along the rail while Absolute Champion was just to his outside and Sunny Sing another path further out. Down Town settled at the rear of the field early, off the rail away from traffic trouble. At the top of the stretch, after a half in 44.70, Desert Lord surged to the front with the late-rushing 17-1 Scintillation also putting in his bid for the lead. However the quick pace set the race up for the closers. In mid-stretch, Absolute Champion closed well just off the rail, taking a 2 length lead with a furlong to go, and easily drew away from the pack to win by 4 1/4 lengths over the onrushing Silent Witness. Absolute Champion lowered his own track record by 3/10 second, completing the trip in 1:07.80. It was another length back to deep-closing 38-1 longshot Benbaun in third, while Down Town was fourth. 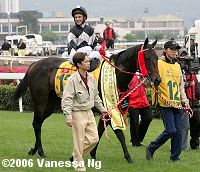 Absolute Champion heads for the winner's circle. Winning jockey Brett Prebble said, "That was some performance. It was amazing. To win a race like this by over four lengths - wow!" 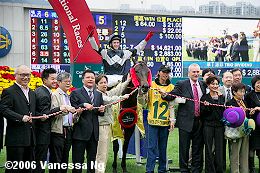 Absolute Champion in the winner's circle. Winning trainer David Hall said, "It would have been pretty hard to say that he could have improved after his last run when he broke the track record, but somehow he's done it. I was very disappointed that he was not selected for the race in the first place - I thought there were no ifs and buts about breaking a track record but he's more than proved that now." 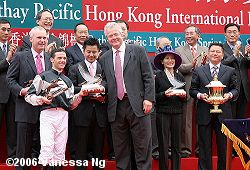 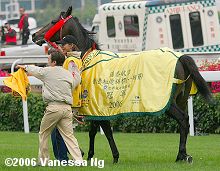 Absolute Champion returns to the barn after the race. Trainer David Hall said, "That's one of the most impressive wins that I've seen for a long time and it's sweet when it's your own. I know that he had a bit of a reputation before he came to my stable but maybe he just enjoyed the switch. Adding the side-winkers has probably had an effect as well." 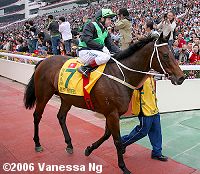 Second place finisher Silent Witness heads back to the paddock after the race. He still has a very big fan following and you can see all the people in the background taking his photo. His jockey Felix Coetzee said, "He's run a great race, but he's found one too good. The winner was a firecracker today." 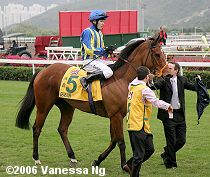 Third place finisher Benbaun returns after the race. His jockey Jamie Spencer said, "Very pleased with his run, they went very fast early, and I was further back than I wanted to be, but turning into the straight I thought he would get into the three." Trainer Mark Wallace added, "I am absolutely thrilled to have a horse that has become the first from the Europe to finish in the frame in this race. He deserves to win a really big one - he has only won two Group Three races back home. There is every chance we shall try and do this again."