The HK$16 million (about $2 million US) Hong Kong Mile (G1) is the third stakes event of the Cathay Pacific Hong Kong International Races. A full field of 14 went to the gate in this 1600-meter (about 1 mile) event around one turn of the main turf course at Sha Tin. Local hero Armada was sent off as the 6-5 favorite over 5-1 second choice Floral Pegasus, also Hong Kong-based. Clearly the more than 51,000 fans in attendance were supporting the locals, as Bullish Luck was the 7-1 third choice. The shortest priced foreigner in the field was the 9-1 fourth choice Dance in the Mood from Japan. 44-1 outsider Rebel Rebel is the only American horse entered in the International Races, shipping in from New York for trainer Richard Dutrow, with regular rider Edgar Prado aboard.

Italian hope and 16-1 shot Ramonti was allowed an uncontested pace down the backstretch, through quick early fractions of 24.70, 47.00, and 1:10.50 over the good-to-firm course. 55-1 outsider Sir Ernesto stalked him the whole way. Armada and Floral Pegasus settled in mid-pack while Bullish Luck and Rebel Rebel sat closer to the rear of the field. At the top of the stretch, 14-1 The Duke, who had stalked the pace in third most of the way, came out for running room under the controls of jockey Olivier Doleuze, and closed well on the stubborn Ramonti. With a furlong to go, The Duke passed Ramonti but Armada was closing with a rush down the center of the course. At the line, The Duke held off Armada by a head, completing the 1600 meters in 1:33.40, just 1/10 of a second off the track record which has stood for 23 years. It was another 1 1/2 lengths back to the tiring Ramonti in third, and 3/4 more to Bullish Luck in fourth. Rebel Rebel failed to fire, checking in eighth. 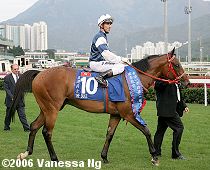 The Duke heads out for the winner's circle ceremony. This was the third time to run in the Hong Kong Mile for The Duke. He finished third in 2004 and second in 2005. 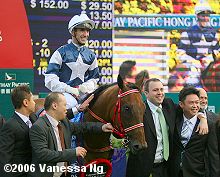 The Duke in the winner's circle. Winning jockey Olivier Doleuze said, "It is a special day, special story and special horse. The pace was perfect for me and in the straight I made a move and got a slight lead and that is what won the race for me because Douglas (Whyte) was coming very hard at the finish." 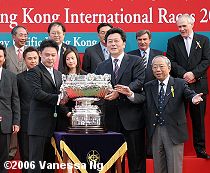 Mr. John C. C. Chan, Chairman of the HKJC, and Mr. Li Gang, Deputy Director of the Liaison Office of the Central People's Government in HKSAR, present the Cathay Pacific Hong Kong Mile trophy to Mr. Eddie Junior Yau, owner of The Duke. Winning trainer Caspar Fownes said, "Very pleased to have won this race. We planned his campaign so this was his fourth race as he always seems to win on his fourth start each year. Although he is a seven year old he is in the form of his life. He has been placed in this race before and it is great he has finally won it. It's my first Group One win and it's very special." 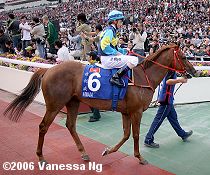 Second place finisher and beaten favorite Armada heads back to the barn after the race. His jockey Douglas Whyte said, "What can I say? The post came a stride too soon. He ran brilliantly, he gave me everything." 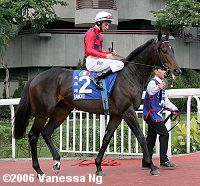 Third place finisher Ramonti heads out for the track before the race. His jockey Edmondo Botti said, "Very happy with the run and an especially good effort from the draw. I hoped I might get an easy lead early but he showed he is up to running in this class and he kept on well."