The main event of the Cathay Pacific Hong Kong International Races at Sha Tin is the $20 million HK (about $2.57 million US) Hong Kong Cup (G1). Just seven faced the starter in this 2000 meter (about 1 1/4 mile) turf contest, with local hope Viva Pataca sent off as the heavy 3-10 favorite, coming off a win in the Cup Trial, the major local prep for the race run over the same course and distance. He also won the Queen Elizabeth II Cup and was fourth in the Hong Kong Cup last year. Shipping in to challenge him was 4-1 second choice Ramonti, purchased by Godolphin Racing after his third place finish last year. This year he won the Queen Anne, Sussex, and Queen Elizabeth II stakes, all Group 1 events in England. Another local hope, 2005 Cup winner and last year's 3rd place finisher Vengeance of Rain, was sent off as the 8-1 third choice on the board.

18-1 Royal Prince was quickest away and despite taking the clubhouse turn very wide, he was pulled back to the rail at the start of the backstretch to set the slow pace of 27.60, 52.40, and 1:16.50, while being stalked by 23-1 Shadow Gate most of the way. Ramonti sat just off those two in third. Entering the lane, the field bunched up as Shadow Gate poked his head in front at the 1/4 pole, getting the mile in 1:40.10. Viva Pataca looked like he had an opening but Ramonti, who came out widest of all, angled in and shut the door on the favorite. Ramonti came in all the way to the rail as Viva Pataca got back into his best stride and closed the gap. However, Ramonti easily held him off in the final 1/16 to win by 1/2 a length in a time of 2:02.80 over the firm course. It was another 2 1/2 lengths back to 99-1 longest shot Musical Way in third.

There was an inquiry and objection after the race alleging interference after the 300 meters by Ramonti against Viva Pataca, but the result remained unchanged. 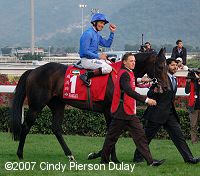 Frankie Dettori celebrates while trainer Saeed bin Suroor leads Ramonti to the winner's circle. His jockey Frankie Dettori said, "He's one of the bravest horses I've ever ridden. It was his first time over ten furlongs and he was a bit keen because of the slow pace, but when I set him alight I knew it would take a very good one to get past him. He's one of the best. To win four Group Ones in a season is a fantastic effort. He stays in training and there's a lot to look forward to." 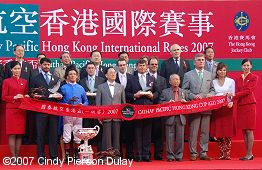 The trophy presentation for the Hong Kong Cup. Simon Crisford, racing manager for winning owner Godolphin said, "This is one of the most prestigious races in the world to win, and we targeted this race with Ramonti. We bought him after his run in the Mile here last year in the hope that he would develop into the Godolphin mold of an international horse and he has been fantastic for us. He'll have an entry for the Dubai World Cup on the sand. With hindsight, we made a good decision to miss the Breeders' Cup for this race. It has paid dividends today." 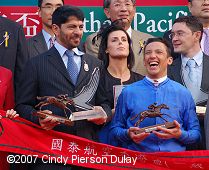 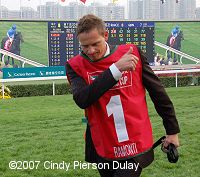 Right: Ramonti's groom gives the thumbs up before the race. Guess he knew his horse would win. 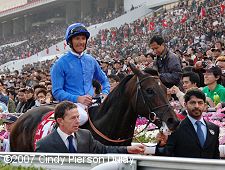 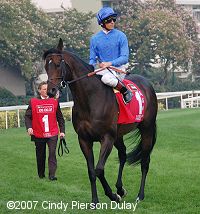 Left: Ramonti comes back for jockey Frankie Dettori to weigh out and to wait out the objection. You can see the huge crowd in the background

Right: Ramonti in the post parade before the race. 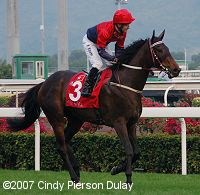 Second place finisher and beaten favorite Viva Pataca returns after the race. His jockey Mick Kinane said, "The slow pace was the problem, it was no help to me at all. I had some trouble in the straight, but it was really the lack of pace that was his undoing." 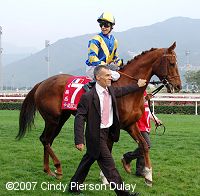 Third place finisher Musical Way in the post parade. His trainer Philippe Van de Poele said, "I am very pleased with her performance and she has proved she is top level. We could have done with more pace but she ran great and stays in training next year."