The highlight of the Fall Championship Meeting at Belmont Park is Breeders' Cup Challenge day, with four Grade 1 events on the card, with each winner guaranteed entry into the corresponding Breeders' Cup race to be run in less than four week's time at Monmouth Park. An official attendance of 19,338 was on hand, but this figure is inflated by "spinners" taking advantage of the lawn chair giveaway. The feature race on Challenge day is the $750,000 Jockey Club Gold Cup (G1) for older horses going 1 1/4 miles on the main track, seeking entry in the Breeders' Cup Classic. Lawyer Ron was sent off as the 7-10 favorite coming off runaway wins in the Whitney and Woodward at Saratoga. In to challenge him was 2-1 second choice Curlin, winner of the Preakness but third in the Haskell last time out, and making his first start against older horses.

40-1 outsider Brother Bobby contested the early pace with Lawyer Ron to his outside down the backstretch through fractions of 24.46, 47.88, and 1:11.66 while jockey Robby Albarado kept Curlin unhurried in midpack fifth most of the way. On the far turn, Brother Bobby faded from contention allowing Lawyer Ron to gain the lead at the top of the stretch, getting 1 mile in 1:36.60. However, Albarado swung Curlin out four wide to pass tiring horses and was quickly closing the gap through the stretch. The pair hooked up inside the 1/8 pole, and after a brief duel, Curlin dug in and pulled ahead to win by a neck in 2:01.20 over the fast surface. It was a long 4 lengths back to Political Force in third, and 6 more to the rest of the field.

Check out the other races on the card: The Beldame, Joe Hirsch Turf Classic Invitational, The Vosburgh, and from Saturday The Flower Bowl Invitational and Kelso Handicap. 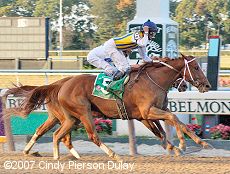 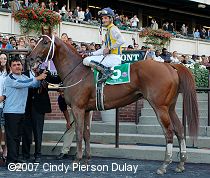 Curlin in the winner's circle. His trainer Steve Asmussen said, "We felt very good about how this race unfolded. There was no pace in the (Belmont Stakes), and he was stuck down on the inside. Those are nothing but excuses for a horse that got beat. Today, he ran extremely well. Coming off the two months, he carried Robby a lot farther. When he came into the stretch, you saw him slap him with the stick down and he jumped right into the bridle. I think he is an outstanding horse, and he proved so once again today. The third in the Haskell and the third in the Kentucky Derby were against horses whose form had held up. We'll all meet in a month's time, probably to decide a lot of honors. Hopefully, it didn't take too terribly much out of him and he'll be sharp for the Classic." 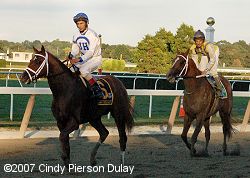 Curlin and Lawyer Ron return after the race. Curlin's jockey Robby Albarado said, "I just let him gather himself up. I was confident the whole race. It looked like Lawyer Ron got a little rank down the backstretch, so I just sat behind him. Johnny (Velazquez) made his move and I just followed suit. Curlin loves being outside, so I was pretty confident during the stretch drive. It feels great to beat a great horse; Lawyer Ron is a great horse. He ran in all three Triple Crown races and could have been a little dull going into the Haskell. Steve freshened him up and passed up some opportunities to run him today. Steve's done a great job campaigning him." 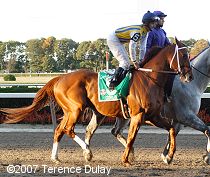 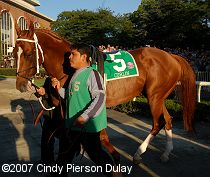 Right: Curlin in the paddock before the race. 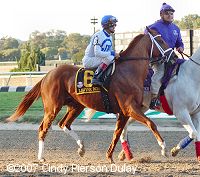 Second place finisher Lawyer Ron in the post parade. His trainer Todd Pletcher said, "I thought he ran great. The only thing we were concerned about happened: he never quite settled like he did in Saratoga. He was very sharp and he never gave up. He ran a big race and actually galloped out in front. I don't think the distance is an issue, we just have to get him to settle down. I want to win every single race that I run in; sometimes, it doesn't happen. I think we learned something today. I think there is room for improvement. Hopefully, 27 days from now, he'll run just a little bit better than he ran today. I think if Any Given Saturday, Curlin, Hard Spun and Street Sense all go to the Breeders' Cup, there is a chance for them to prove who is the best 3-year-old. Hopefully, Lawyer Ron will be there to say something as well." 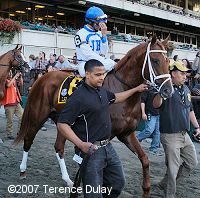 Second place finisher Lawyer Ron heads out to the track before the race. His jockey John Velazquez said, "He never got to relax today. He was so much on the bridle today for 1 1/4 miles. When I gave him his head he responded but he expended way too much energy for a 1 1/4 mile race." 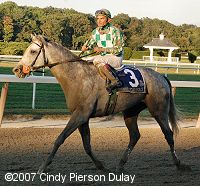 Third place finisher Political Force returns after the race. His jockey Cornelio Velasquez said, "The last 3/16 mile the No. 1 horse (pacesetter Brother Bobby) came over on me and bothered me a lot. But (Political Force) ran well. He ran a terrific race."