Breeders' Cup Challenge day at Belmont Park featured four Grade 1 races, all part of the new "Win and You're In" promotion, where each winner is guaranteed a spot in the field of the corresponding Championship race. The $600,000 Beldame Stakes (G1) featured a field of 7 older fillies and mares going 1 1/8 miles around one turn of the main track, looking for a spot in the Emirates Airline Breeders' Cup Distaff at Monmouth Park. Ginger Punch was sent off as the 11-10 favorite, coming into this race off three straight wins in the First Flight, Go For Wand, and Ruffian handicaps. In to challenge the Frank Stronach homebred were 5-1 second choice and Personal Ensign Stakes winner Miss Shop, coming off a close second in the Ruffian, and 6-1 Unbridled Belle, winner of the Delaware Handicap but a distant second in the Personal Ensign last out.

30-1 Ice Cool Kitty set the early pace down the backstretch while battling for the lead with 7-1 Indian Vale through fractions of 24.44, 47.48, and 1:11.29, while Ginger Punch sat in midpack fifth. Around the turn, Ice Cool Kitty tired badly allowing Indian Vale to take over the lead with 2 1/2 furlongs to go. Ginger Punch moved up to challenge for the lead but Unbridled Belle, who raced as far back as sixth early, came out wide into the stretch, found room between horses at the 3/16 pole, and closed with a rush to prevail by a head over Indian Vale in 1:48.63. It was a long 2 1/4 lengths back to favorite Ginger Punch who faded in the final 1/8 mile.

Check out the other races on the card: Jockey Club Gold Cup, Joe Hirsch Turf Classic Invitational, The Vosburgh, and from Saturday The Flower Bowl Invitational and Kelso Handicap. 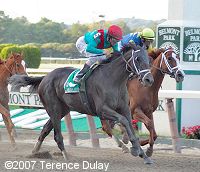 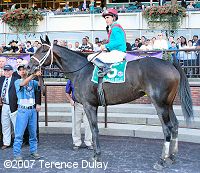 Unbridled Belle in the winner's circle. Her trainer Todd Pletcher said, "Obviously, Unbridled Belle is just a better filly this year than she was last year. I thought there'd be a little more pace. It's unfortunate that sometimes you have to run them together (Pletcher trains both Unbridled Belle and Indian Vale), but it was the right thing for both fillies and both owners. I think they both ran well enough to go forward (to the Breeders' Cup Distaff)." 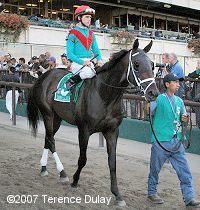 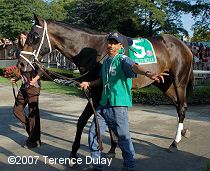 Left: Unbridled Belle heads out to the track before the race. Her jockey Ramon Dominguez said, "My only concern was around the 3/8 pole. She was feeling so good, I was worried she would clip heels. I was able to get outside and she was able to get her momentum going again. Sometimes, a horse as big as she is will lose its momentum, but she kept going all the way down the stretch."

Right: Unbridled Belle in the paddock. 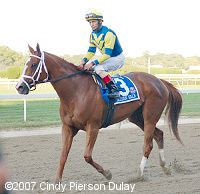 Second place finisher Indian Vale returns after the race.Her trainer Todd Pletcher said, "Considering she was stuck inside there, Indian Vale never could really get clear of Ice Cool Kitty at any point. Indian Vale is a deserving Grade 1 winner. It's a tough loss for her. On the flip side, the other filly (Unbridled Belle) also ran a big race."

Her jockey John Velazquez said, "I didn't want to be on the lead. She got caught up in the duel. From the half-mile pole to the 1/4 pole, she had to run hard just to stay where we were. I felt (Unbridled Belle) coming, but I thought my filly ran a huge race." 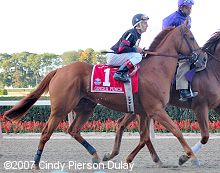 Third place finisher and beaten favorite Ginger Punch in the post parade. Her jockey Rafael Bejarano said, "She was comfortable. She didn't have to be on the lead. She really tried hard, but she got tired in the end. I think this race and her last race were too close."