With less than four weeks before the Breeders' Cup World Championships at Monmouth Park, many potential entrants are making their final preps this weekend. Four stakes events on the turf with possible Breeders' Cup implications were contested at Belmont Park on Saturday, before a live crowd of just 6,609.

The highlight event on Saturday was the $600,000 Flower Bowl Invitational (G1) for the Filly and Mare Turf division. Nine older fillies and mares contested this 1 1/4 mile trip over the inner turf course, with Ballston Spa winner Wait a While sent off as the 4-5 favorite over 7-2 second choice Royal Highness, winner of the Beverly D at Arlington Park. 7-1 Argentina, second in the Diana last time out, was the third choice on the board.

18-1 outsider Rosinka was allowed an uncontested lead first time past the stands and around the clubhouse turn through fractions of 24.76, 49.13, and 1:12.74 over the firm course, while as many as 1 1/2 lengths clear of Wait a While stalking her in second. Turning for home, jockey Garrett Gomez aboard Wait a While asked her to close the gap and she did, pulling even with the pacesetter after 1 mile in 1:35.97. However, 21-1 Lahudood, who had tracked Wait a While in third the whole way, found room on the rail and came through to get the win by just 3/4 length over Rosinka, who held off Wait a While in the final strides to hold second place by 1/2 a length.

Check out the other races on Sunday: Jockey Club Gold Cup, The Beldame, Joe Hirsch Turf Classic Invitational, and The Vosburgh. 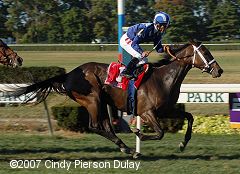 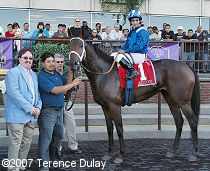 Lahudood in the winner's circle. Her trainer Kiaran McLaughlin (far left of photo) said, " On her European form, (Lahudood) was the better one (than stablemate Makderah, out with an injury). This was the first time everything went perfect. She wants to be covered up and make a run on firm ground. (Shadwell Farm racing manager) Rick Nichols told me that the boss didn't send her over here to be an allowance horse. Alan gave her a great ride today. It wouldn't be a problem if we had to supplement her (to the Breeders' Cup)." 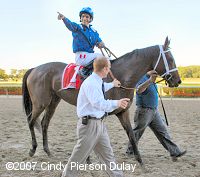 Jockey Alan Garcia celebrates his first Grade 1 victory aboard Lahudood. He said, "I was down inside. I was watching (Wait a While) the whole time. I knew Garrett had some horse. Around the turn, I just tried to be patient. In the stretch, there was some room to go inside, so I sent her through. She really responded. She ran so good." 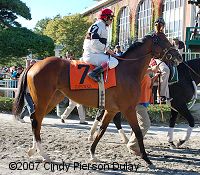 Second place finisher Rosinka heads out of the paddock before the race. Her trainer H. Graham Motion said, "It was a very good effort. It's not exactly how we wanted it to set up. In an ideal world, I would have liked to have seen her have a target. I think she is a little better stalking. We'll have to talk about the Breeders' Cup. She's not nominated, and she is a very difficult filly to saddle, which worries me at Monmouth." 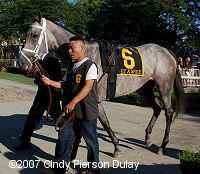 Third place finisher and beaten favorite Wait a While in the paddock. Her trainer Todd Pletcher said, "Garrett doesn't feel she handles this turf course quite as well as she does some others. We'll still go on to the Breeders' Cup with her."

Her jockey Garrett Gomez said, "I thought I sat a good trip. I got her on her feet and she was able to relax. I thought we were going pretty comfortably. When it came time, she really didn't seem to jump up on the bridle. Maybe this will be a springboard forward. Both times I rode her on this turf course, she ran sub-par."

A field of ten older horses went to the gate in the $250,000 Kelso Handicap (G2), a 1 mile trip over the Widener course for horses targeting the Netjets Breeders' Cup Mile. 6-5 favorite After Market shipped over from California coming off a 4-race winning streak including the Del Mar Handicap last time out. In to challenge him were 5-1 second choice Trippi's Storm, fourth in the Man o'War last time out, and 6-1 English Colony, winner of the Light N Music at Belmont on September 9.

27-1 outsider Jet Propulsion battled on the pace with English Colony down the backstretch and around the far turn through fractions of 23.45, 45.79 and 1:09.15, while as many as 3 lengths clear of the rest of the field. Jet Propulsion began to fade from contention at the 3/16 pole allowing English Colony a brief lead in mid-stretch, but their fast pace set the race up for the closers. Trippi's Storm, who had raced in 6th early, came out four wide into the stretch and closed with a rush to get up by 1/2 a length over another late runner and favorite After Market in 1:32.36. It was another 1 1/2 lengths back to 11-1 Palace Episode in third. 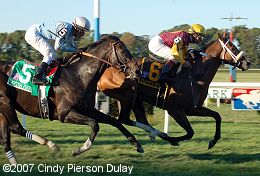 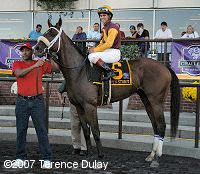 Trippi's Storm in the winner's circle. His trainer Stanley Hough said, "We never really knew this horse's best distance. Obviously, a mile fits him pretty well. We would have to consider the Breeders' Cup (Mile). Obviously, it will be very tough. We'll see how he comes out of it. He ran back a little quick this time, and that would be a little quick again. But it worked this time. I thought the pace was good, and he seemed to settle in nice. Javier rode him great: he saved some ground and angled out." 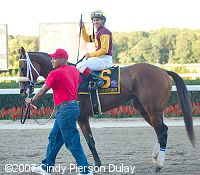 Jockey Javier Castellano celebrates the win aboard Trippi's Storm. He said, "There was enough pace and my horse settled down beautiful for me. I told Stan we would probably have to come from farther off the pace, and just let the speed go. He ran beautiful today and beat some nice horses. If he is in the Breeders' Cup, I would love to ride him." 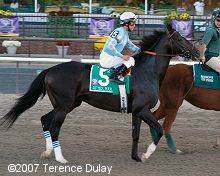 Second place finisher and beaten favorite After Market in the post parade. His jockey Alex Solis said, "He ran incredible. They ran fast the whole way and he finished up good. This should get him set up nice for the Breeders' Cup. I thought he showed a lot today, shipping across the country and running the way he did." 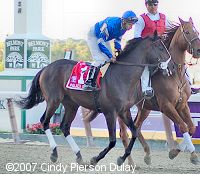 Third place finisher Palace Episode in the post parade. The 11-1 shot raced well off the pace in 8th early under regular rider Jean-Luc Samyn, passed tiring horses along the inside on the turn, and closed well through traffic to get up for third beaten just 2 lengths. The Saeed bin Suroor trainee improved his record to 4 wins, 0 seconds and 1 third in 9 career starts with earnings of $356,532 for owner Godolphin Racing. 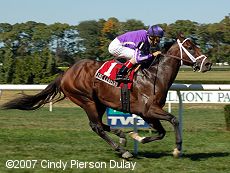 Kicking off the stakes action on Saturday was the $75,000 Pilgrim Stakes for 2-year-olds going 1 1/16 miles on the Widener course. 4-5 favorite The Leopard, exiting a fifth place finish in the Futurity last time out, made his turf debut a winning one. He took over the lead right away and battled with 28-1 longest shot He Ain't Easy through fractions of 24.82, 49.17, and 1:13.89, then when asked by John Velazquez, found another gear and powered away from the competition to win by 2 3/4 lengths in 1:41.61. It was another 3 1/4 lengths back from He Ain't Easy to 5-1 Grasberg in third.
Results chart 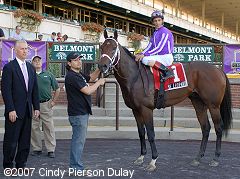 The Leopard in the winner's circle. His trainer Todd Pletcher (far left of photo) said, "We were looking to find out about the Breeders' Cup Juvenile Turf. We had to run him back a little sooner than we wanted to, just to see where we were. We thought he was a little better colt than what he showed in the Futurity, and he's got so much turf in his pedigree. We worked him last week with Red Giant, who won the Virginia Derby, and they worked head and head. The fractions were very realistic for him. The impressive part was the way he finished. He finished the last quarter in 22 seconds, that's what we were looking for."

His jockey John Velazquez said, "He just broke running. He relaxed himself; I didn't have to do much. We got to the 1/4 pole, I showed him the whip, spanked him, and he came home real nice." 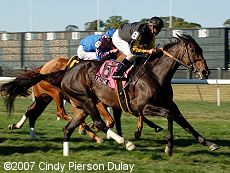 The $75,000 Dynamic Lisa Stakes featured a field of nine New York-bred older fillies and mares going 1 mile on the Widener course. 2-1 favorite Factual Contender sat back in sixth off the pace of 22.99 and 46.89 set by 14-1 Tishmeister, then came out four wide under jockey Eibar Coa and rallied well to get up by 1/2 a length over 4-1 third choice Rewrite in a time of 1:33.39. It was just a neck back to 8-1 Half Heaven in third.
Results chart