The first of four Breeders' Cup Challenge "Win and You're In" races on Sunday at Belmont was the $400,000 Vosburgh Stakes (G1). A field of 8 older horses sprinted 6 furlongs on the main track looking for a guaranteed entry into the TVG Breeders' Cup Sprint at Monmouth Park. Last year's Cigar Mile winner Discreet Cat was sent off as the 9-10 favorite despite being unraced since his last-place effort in the Dubai World Cup in March. Also in the race were 3-1 second choice First Defence, winner of the Long Branch at Monmouth then second to Hard Spun in the King's Bishop, and 9-2 third choice Fabulous Strike, winner of the Aristides at Churchill but 5th in the Smile Sprint at Calder last out.

Fabulous Strike and 18-1 outsider Talent Search were quickest out of the gate and battled on the front end down the backstretch and around the turn through quick fractions of 21.89 and 44.51 over the fast main track. Discreet Cat stalked them in third 2 1/2 lengths off the quick early pace. Entering the stretch, jockey Garrett Gomez took Discreet Cat three-wide and asked him for run but the favorite did not respond. Fabulous Strike drew off to win by 5 3/4 lengths over the tiring Talent Search, who just held off Discreet Cat by a neck for second place money.

Check out the other races on the card: Jockey Club Gold Cup, The Beldame, Joe Hirsch Turf Classic Invitational, and from Saturday The Flower Bowl Invitational and Kelso Handicap. 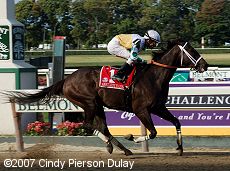 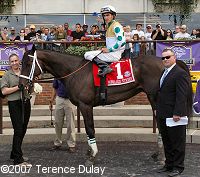 Fabulous Strike in the winner's circle. His trainer Todd Beattie said, "I was a little concerned with the rail. But I had so much confidence in Ramon. I told him to ride his race. I was positive he could come from off the pace, not that I wanted to take him back. I was nervous after the first 1/4, but when they got around to the 1/4 pole and I looked at my horse, compared to the other jockeys being busy on their horses, I felt very comfortable that we would have horse left. I really thought I was going to see this in Miami, but he had heat exhaustion. We'll take him back to Penn National. I have my own barn there and we'll train him up to the Breeders' Cup." 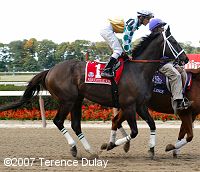 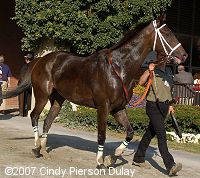 Fabulous Strike in the post parade and returning to the barn after the race. His jockey Ramon Dominguez said, "I'm glad he showed up today. Even though he had some huge Beyers, there was a lot of skepticism. We were going so fast, but he was going easy. I was just hoping I would have some horse. As soon as I opened by hands, he just exploded. This horse is a running son of a gun. I know Todd will have him in great shape going into the Sprint." 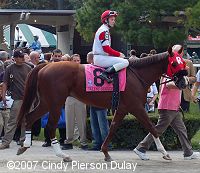 Second place finisher Talent Search in the paddock. His trainer Mark Shuman said, "He ran great race. I never bet, but I had to bet him because he was such a big price. He finished up in front of some great horses. If everything is okay, we'll look at the (Breeders' Cup Sprint)."

His jockey Ryan Fogelsonger said, "It was pretty exciting down the stretch. He's got such a big heart. He ran an awesome race. Very game. He's the best sprinter I've been on in my short career." 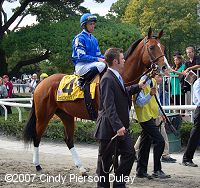 Third place finisher and beaten favorite Discreet Cat leaves the paddock before the race. His trainer Saeed bin Suroor said, "He needed the race and should improve off of this race. He had been working well and was physically sound. We'll have to see how he comes out of this race and check him over. If everything is fine, I would be happy to send him to the Breeders' Cup (Dirt) Mile. I think the mile would be better for him. Six furlongs is too short for him and his race."

His jockey Garrett Gomez said, "When it came time to really dig down and run, he started getting tired on me. He hadn't run since the Dubai World Cup. You put him in an allowance and he gallops. You're talking about Grade 1 horses here, and a Grade 1 race. You're asking an awful lot of him, but we knew if anyone was up to the task, it was going to be him. He was there for me except for when it came time to really bear down and run." 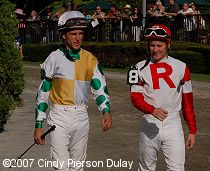 Just as an interesting coincidence, the jockeys of the winner and second place horse, Ramon Dominguez and Ryan Fogelsonger, entered the paddock together before the race.