The $600,000 Joe Hirsch Turf Classic Invitational (G1) at Belmont Park is the "Win and You're In" race for the John Deere Breeders' Cup Turf. A field of seven older horses went to post in this 1 1/2 mile trip over the Widener (outer) turf course. Defending champion English Channel was sent off as the 2-5 favorite coming off a runner-up finish in the Sword Dancer after winning the United Nations. In to challenge the Todd Pletcher trainee were 6-1 second choice Mustanfar, coming into this race off two straight second place finishes in the Dominion Day at Woodbine and the Washington Park at Arlington. Irish-bred 8-1 Stream of Gold rounded out the top three on the board, making his second American start after racing in Dubai and England, winless since the Lincoln Handicap at Doncaster in April 2005.

16-1 Mission Approved went to the front first time past the stands and set the pace of 23.96, 49.45, 1:13.73, 1:38.23, and 2:01.93 while being stalked by 15-1 Kiss The Kid for the entire first lap of the course. English Channel sat just off the pace in third, saving ground along the temporary rail the whole way. Entering the stretch, Mission Approved tired and dropped out of contention while Stream of Gold, who had raced in fourth early, made his move and took the lead with a furlong to go. However, jockey John Velazquez aboard English Channel found room on the inside and came through with a rush, easily passing Stream of Gold at the 1/16 pole to win going away by 2 1/4 lengths in 2:25.73 over the firm course. It was another 3 lengths back to late-running 19-1 Interpatation in third.

Check out the other races on the card: Jockey Club Gold Cup, The Beldame, The Vosburgh, and from Saturday The Flower Bowl Invitational and Kelso Handicap. 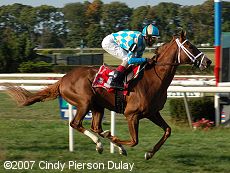 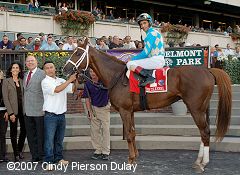 English Channel in the winner's circle with owner James Scatuorchio on the left. His trainer Todd Pletcher said, "You are always anxious when you are a big favorite and you are supposed to win. He was very relaxed, and I knew Johnny had horse. He just needed a spot to go. Fortunately, things opened up for him enough on the rail. I thought that once he got clear, he is just such a good horse that I knew he had the ability to quicken. I never doubted this horse's ability. He's been a terrific horse for us. He's a head shy of winning three Turf Classics. This turned out to be a perfect prep. He relaxed really well and only ran for 1/8 mile." 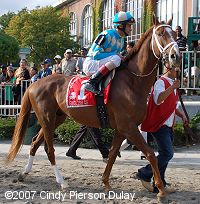 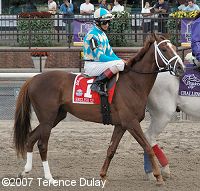 English Channel in the paddock and post parade. His jockey John Velazquez said, "He's a little difficult to ride, because he drifts when you pull him. When I got in there, I yelled at Coa (jockey Eibar Coa aboard Mission Approved) so he wouldn't put me over the fence. He was fine once he got through. He's just a nice horse." 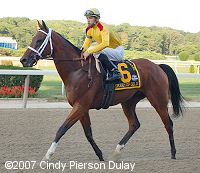 Second place finisher Stream of Gold returns after the race. His trainer Kiaran McLaughlin said, "We know he is a nice horse. We weren't sure how he was going to run against these horses. We thought he would like the distance, based on his pedigree. We were happy to finish second to English Channel, and we were disappointed in how Mustanfar ran. I don't think we will be going to Monmouth Park for the Breeders' Cup Turf."

His jockey Eddie Castro said, "My horse ran real big. He finished up so strong. I was very proud of him. The winner was just too good." 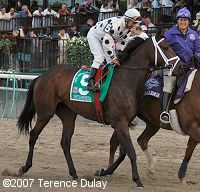 Third place finisher Interpatation in the post parade. His trainer Bobby Barbara said, "I'm happy with his race. We gave him a freshening and he's come back good. English Channel is a good horse. I think we'll look at a race like the Knickerbocker (at Aqueduct on October 27)."

His jockey Jose Espinoza said, "We were in good position throughout the race. It took him a little time to pick it up. Once he got going in the clear, he finished up strong." 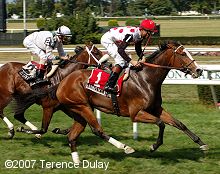 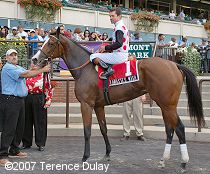 Namaste's Wish in the winner's circle. Her trainer Bill Mott said, "The thought of running her on the turf has always been in the back of my mind. Because of her pedigree, I thought she would handle the dirt well, but all she did in those first two starts was fight over the dirt. Obviously, she has handled the grass well. We may consider running her in the Breeders' Cup Juvenile Turf before putting her away for the year. That may be one of our options."