Belmont Stakes day features one of the richest undercards of the year. Three of the races were contested on the turf, highlighted by the $400,000 Manhattan Handicap (G1) for older horses going 1 1/4 miles on the inner turf course. A field of eight went to post with English Channel sent off as the 3-2 favorite despite racing poorly in the Dubai Duty Free in his last start. In to challenge was 3-1 second choice Better Talk Now, fourth in the Woodford Reserve Turf Classic on Derby day in his last start, and 7-2 Cosmonaut, runner-up in the Dixie on Preakness day.

25-1 outsider Red Zipper led most of the way with Cosmonaut and English Channel in close contention through slow fractions of 25.30, 50.58, and 1:14.95 over the firm course. As usual, Better Talk Now sat near the back of the field early. Red Zipper dropped from contention on the far turn allowing Cosmonaut a short lead into the stretch through a mile in 1:38.72. Cosmonaut opened up a 1 1/2 length lead at the 1/8 pole but Better Talk Now, who had saved ground the whole way, came through a hole on the rail, and English Channel, who passed the tiring pacesetters on the outside, were quickly narrowing the gap. At the line, Better Talk Now prevailed by a head in 2:02.39 over English Channel, who nosed out 9-1 Shakis for the place spot. Cosmonaut finished fourth. 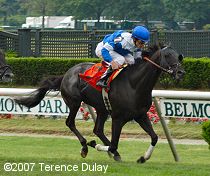 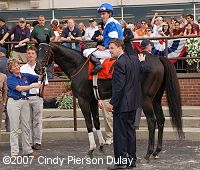 Better Talk Now in the winner's circle with trainer H. Graham Motion at his flank. Motion said, "I thought he won. I'm usually pretty negative about those photos. It's hard to believe but this horse is getting better. He's more settled and more relaxed. He really shouldn't have been able to close like that into those fractions. He is an unbelievable horse. I would never question Ramon (Dominguez, jockey) if he moved too late. There were times when I thought the horse might have moved too early in his career. Ramon rode him beautifully today, he has so much confidence in him." Motion said he would go next in the United Nations at Monmouth and then the Sword Dancer at Saratoga. 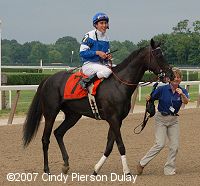 Better Talk Now returns after winning the race. His jockey Ramon Dominguez said, "I was not worried at all. Early in the race, he became so much more settled. It was great to see him off the bridle. As we got to the backside, I had the feeling they were going a bit slow. From there, the horse just galloped beautifully. I was able to save ground. At the 1/16 pole, he was able to come up the rail. It was amazing to come through after the slow fractions." 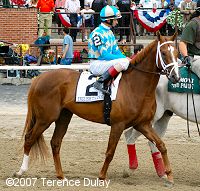 Second place finisher and beaten favorite English Channel in the post parade. His trainer Todd Pletcher said, ""He's been a little bit unlucky in this race. The last two years, he's been beaten a couple of heads and a neck. He ran well first time back from Dubai. He's probably best at 1 3/8 to 1 1/2 miles." Jockey John Velazquez added, "He was throwing his head up. So, I let him go at the 3/16 pole. I thought he was going to move on, but he started to wander around. He started fighting back when he saw the other horses. Then (Better Talk Now) got through on the inside. By then, there was nothing we could do." 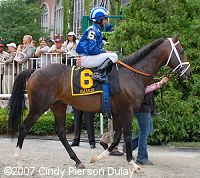 Third place finisher Shakis heads out of the paddock before the race. His trainer Kiaran McLaughlin said, "He ran very well. He's coming back on short rest. With a little more time between races, he might have been able to run a little bit better. The horses that finished 1-2 were very good. I don't know what we're going to do. I want to give him a little more time to his next start." Jockey Alan Garcia added, "I had a lot of horse. He was coming from the 1/4 pole to the wire. I thought we were going to win the race. We didn't miss by much." 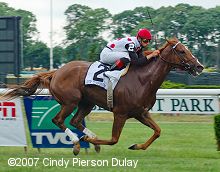 The $300,000 Just a Game Stakes (G2) featured older fillies and mares going 1 mile on the Widener turf course. Only 5 entered with Honey Fox winner Wait a While the 7-10 favorite despite finishing a distant fifth in the Jenny Wiley in her last start. When the gate opened, 7-2 second choice My Typhoon and Wait a While went right to the front and after battling the first quarter mile in 25.03, Wait a While eased off allowing My Typhoon an uncontested 1 1/2 length lead through a slow half in 49.01 and 3/4 in 1:12.42. Aided by this slow pace, Eddie Castro asked My Typhoon to open up at the top of the stretch and she did, widening her margin to 3 1/2 lengths with a furlong to go. Wait a While could not gain any ground in the stretch, as My Typhoon cruised to an easy 3 3/4 length win in 1:34.92. It was another 1 1/2 lengths back from Wait a While to 5-1 Take The Ribbon in third.
Full results chart 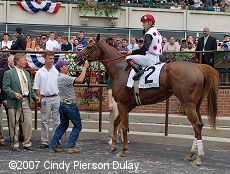 My Typhoon in the winner's circle with trainer Bill Mott on the far left. Mott said, "I thought the pace was an advantage, but the mile race yesterday went in 24 and change and they closed well off of it. Time-wise, the fractions looked comfortable, but in the restricted stake today, the winner came from far back with very slow fractions. We weren't in the winners' circle yet, but I liked the way she was doing it. Going into the turn, he let her out a notch and Wait a While just didn't really keep stride. I think she's kind of gotten better each year and that's why she's still in training. She was very sound and I thought she would improve. She appeared to me to be one of those that hadn't had her best year yet. I give Mrs. (owner Charlotte C.) Weber a lot credit for keeping her in training because she will be a very valuable broodmare." She will start next in the Diana Handicap at Saratoga.

Jockey Eddie Castro said, "It kind of played out like it looked on paper. No one challenged me on the lead and I kind of expected them to. She was going really easy and turning for home, I let her out a little bit. She won really easy. I had a ton of horse at the end." 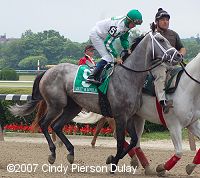 Second place finisher and beaten favorite Wait a While in the post parade. Her trainer Todd Pletcher said, "The winner got away with a pretty slow quarter and half, and we just couldn't run her down. I thought that was the way the race would kind of unfold. We might have let her get away with a little too soft fraction early." Jockey Garrett Gomez added, "I had her in my sights the whole way. I had dead aim on her. Actually, after we went 3/8 mile, I started putting pressure on her and we started quickening. But when you only have so much horse, you can only go so quick. When we turned for home, the leader took off on my. I think maybe a little farther my filly will do better. " 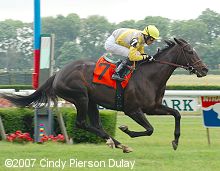 The $80,000 Foresta Stakes is restricted to older fillies and mares who have not won an open stakes race on turf. A field of ten contested this 1 1/16 mile event over the Widener turf course. 9-5 favorite Meribel did not disappoint, settling well off the early pace of 5-1 Flow Chart and then closing with a rush through the stretch to win going away by 1 1/4 lengths over 16-1 I'm In Love in 1:41.97. It was just a neck back to 23-1 Calla Lily in third. Winning trainer Christophe Clement originally intended to enter Meribel in the Just a Game but went for this easier spot. "It's obviously an easier race on paper, and with the conditions of the Just a Game I didn't want to give any weight away. She's a stronger horse, and mentally as she got older she seems to be more mature to me."
Full results chart