The Triple Crown for 2007 wrapped up with the $1 million Belmont Stakes (G1) at Belmont Park in New York. Unfortunately, Kentucky Derby winner and Preakness runner-up Street Sense did not go, preventing a rematch which most fans would have enjoyed. Thankfully, forecasted rains did not materialize and the race was contested under overcast skies with temperatures in the 70's all day, before a relatively small on-track crowd of just 46,870. A compact field of just seven entered this 1 1/2-mile marathon, one lap of the vast main track, with Preakness winner Curlin sent off as the heavy 11-10 favorite. Rags to Riches, a filly taking on males for the first time, was the 4-1 second choice off her runaway win in the Kentucky Oaks in her last start. Kentucky Derby runner-up and Preakness third place finisher Hard Spun was the 5-1 third choice, getting new rider Garrett Gomez replacing regular jockey Mario Pino. Santa Anita Derby winner Tiago was the 7-1 third choice despite finishing a distant seventh in the Kentucky Derby in his last start.

When the gate opened, Rags to Riches went to her knees at the start and was slowest away, as she spotted most of the field about 3 lengths, with only Imawildandcrazyguy slower away after bumping with Tiago at the break. 12-1 C P West and 18-1 longest shot Slew's Tizzy battled on the front end through fractions of 24.74, 50.14, 1:15.32, and 1:40.23 while Hard Spun stalked them close up in third, apparently fighting Gomez who was trying to slow him down. Rounding the far turn, the pacesetters tired badly and dropped out of contention, while Rags to Riches, who raced six wide throughout, moved up along the outside and took over the lead entering the stretch, getting 1 1/4 miles in 2:04.91. Curlin made his move alongside of her, and the pair hit the top of the lane setting up a battle to the finish. The two did not disappoint, battling neck and neck the length of the homestretch. Curlin drifted inwards slightly at the 3/16 pole, and the pair exchanged bumps inside the 1/8 pole. At the finish, Rags to Riches dug in to poke her head in front where it counts most, getting the victory in 2:28.74 for the 1 1/2 miles over the fast track. It was a long 5 1/2 lengths back to late-running Tiago in third, and 5 1/2 more to Hard Spun in fourth. Rags to Riches is only the third filly to win the Belmont, and the first since Tanya in 1905. She is also the only filly to win the Belmont at its current 1 1/2-mile distance. 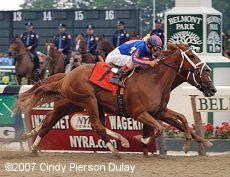 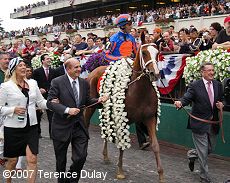 Owners Doreen and Michael Tabor (left) and Derrick Smith (right) lead Rags to Riches down Victory Lane after winning the Belmont. Tabor said, "I just have so much confidence in this filly. I always thought she could do it. Take nothing away from Curlin who is a very special animal, but I always felt that she was just that much better than anything." 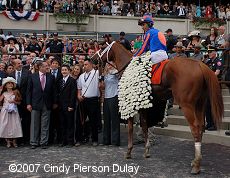 Rags to Riches with her happy connections in the winner's circle. Her trainer Todd Pletcher, celebrating his first win in a Triple Crown event, said, "It's a special feeling now matter when you do it, but when you do it with a filly for the first time in 102 years, it's really special. When she stumbled, I had an immediately bad feeling. But Johnny (Velazquez) and I talked and we wanted to be patient, keep her face clean. We're fortunate to get it done." 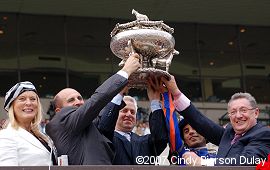 The connections with the Belmont trophy. From left to right: Doreen Tabor, Michael Tabor, trainer Todd Pletcher, jockey John Velazquez, and Derrick Smith. Tabor said, "I know over here it's a big deal, the girls against the boys. We're not so used to that in Europe. So for me, yeah, the girls can take on the boys. For us, it's all about the prestige of a filly winning a Belmont, because we're not going to sell her anyway. So it's all about prestige, as you say, she's not a colt. If it was a colt, it puts a different perspective on it. As it's a filly, we are just here to enjoy and win, and obviously, I suppose if we were a seller, it would put value on her. We hope to breed from her and enjoy the produce." 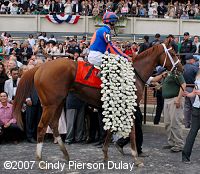 Rags to Riches with her Belmont Stakes carnations. Her jockey John Velazquez, celebrating his first Belmont Stakes win, said, "She stumbled in error and the first thing I thought was, 'Why did it happen right now?' But Todd and I had talked and all we wanted was to give her a good chance around the turn. We didn't want her jumping up and wasting a lot of energy. Garrett Gomez told me she will give you 100 percent without asking. It was unfortunate for him that he turned over the horse, but this victory goes with him, too." 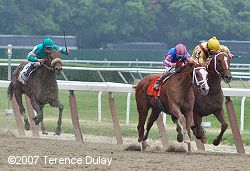 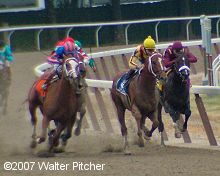 Left: The horses in the stretch with Rags to Riches and Curlin battling on the front with third place finisher Tiago behind them.

Right: Rags to Riches makes her move on the outside as they round the turn into the stretch. 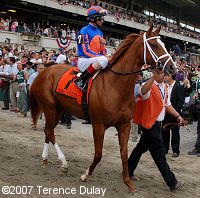 Rags to Riches heads out for the post parade. Jockey John Velazquez said, "I was trying to keep Curlin in there the best as I could. I was actually trying to block him in there and trying to outrun him down the lane. He got through on the rail when he got through, so I made my move also. It was sometimes you got to play the way it looks. He was the horse to beat in the race. You got to look for the horse. I was very fortunate that the filly was running really well around the turn. I got to wait and look where he was. Once he made his move, I made my move, and, you know, she overcame everything. She showed what kind of horse she was." 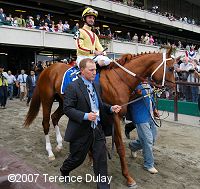 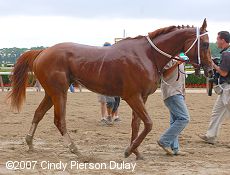 Second place finisher and beaten favorite Curlin before the race (left) and after (right). His trainer Steve Asmussen said, "I thought Curlin ran extremely well. They came into the stretch pretty much heads-up. He fought back very well. My hat is off to Rags to Riches. They ran the last quarter in :23 4/5 in a mile and a half race and she's a deserving classic winner. We lose one the exact same way we won one. At the 1/8 pole, the filly put a good neck on him and he never gave up. The one thing we've learned with Curlin is that he's a competitor; he's got a lot of fight in him."

Jockey Robby Albarado said, "I thought I put him in all the right places. I got through on the inside of Gomez (on Hard Spun) at the 1/4 pole, which was perfect, and got a chance to get a breather. They came home fast. He never stopped. I thought, at one point, he could come back and get her, but she is tough. She is an amazing filly. I was coming back at her but she is a tough filly." 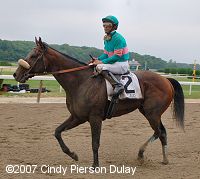 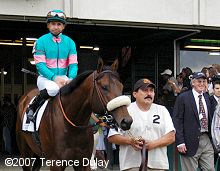 Third place finisher Tiago after the race (left) and before (right) with trainer John Shirreffs on the far right. Shirreffs said, "We were very happy to hit the board in the race. We were very pleased with the effort. If you know anything about Pleasant Taps, they don't start getting good until their four-year-old year. This was a big step for him. He demonstrated that he had the class, and with physical talent and maturity, he is just going to get better."

Jockey Mike Smith added, "They were crawling and you want to move early but I was bottled up inside. I wanted to move, but I couldn't. I had to wait for someone else to move. I couldn't really get out. They were crawling and then they were quickening so fast, that I had to wait for Curlin to make me a spot and we stayed on. It was just a great horse race." 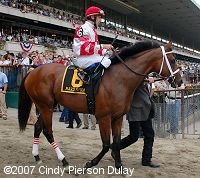 Fourth place finisher Hard Spun before the race. His trainer Larry Jones said, "Everything seems okay, he's just a little tired. The pace was very slow. I thought that was our game plan leaving the paddock: to have these kinds of fractions, but be in front doing it. Apparently, we had a miscommunication somewhere. I know C P West and Slew's Tizzy that were on the front finished behind us, so I don't know how much slower you can get it and still hang out there. (Rags to Riches) ran very well. A mile and a half and getting five pounds makes a lot more difference than running three-quarters and getting five pounds. Maybe that did it. She was fresh. It looked like he came back okay and will live to fight another day."