In addition to the Belmont Stakes, there were four other stakes races contested over the vast main track at Belmont Park on Saturday. The highlight of these was the $250,000 Acorn Stakes (G1), a 1 mile event around one turn for 3-year-old fillies. Only six went to the gate this year, with Dream Rush sent off as the heavy 3-5 favorite off a 2-race winning streak, including the Old Hat at Gulfstream and then the Nassau County Breeders' Cup by 9 lengths in her last start. Also in the field were 4-1 second choice Christmas Kid, winner of the Ashland, and 5-1 third choice Boca Grande, winner of the Comely.

Dream Rush was sent right to the front by jockey Garrett Gomez and she was allowed an uncontested lead of as many as 3 lengths through quick fractions of 22.24, 45.10, and 1:09.13. 16-1 Princess Janie and Christmas Kid contested second place down the backstretch. Entering the lane, Dream Rush continued to lead, and was still 1 1/2 lengths clear at the 1/8 pole, but 6-1 fourth choice Cotton Blossom, who had raced in fifth early, was closing with a rush on the outside after a poor start. Cotton Blossom collared Dream Rush inside the 1/16 pole and pulled ahead to win by 1 length at the line in a time of 1:34.70 over the fast track. It was a long 8 1/4 lengths back to Christmas Kid in third, while Boca Grande was fourth. 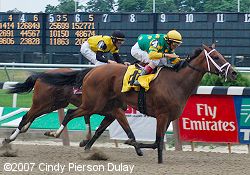 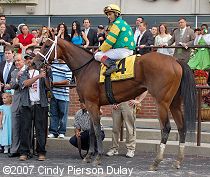 Cotton Blossom in the winner's circle. Her trainer Todd Pletcher said, "She was a little wide throughout, but outside of that, she had a clear run. She had a nightmarish trip in the Kentucky Oaks. She wasn't going to win, but she was going to hit the board. She was a deserving Grade 1 winner today. She's versatile enough where she can win between a mile and 1 1/8. She dug in, and the filly she ran down is a very nice horse." 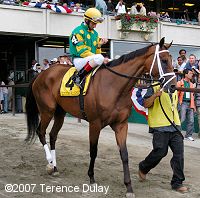 Cotton Blossom comes out to the track before the race. Her jockey John Velazquez said, "It set up for her today. The speed went and she had a really good trip. I couldn't do anything with Dream Rush out there. I had to go out there and run my race. She pulled me up there and turning for home, I was in good position. This horse runs her race at any distance; today, it just really set up for her." 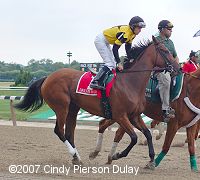 Second place finisher and beaten favorite Dream Rush in the post parade. Her trainer Rick Violette Jr. said, "She ran hard. She might have won her other races so easily that this was the first time she really had to run hard to the wire. And she came up a little bit short. This was also the first time she went a mile. Still, this was a huge, fast race, especially when the older males went 1:22 for seven furlongs. We finished second-best. We were left alone for the first half and Garrett (Gomez) had a lot of horse coming into the lane. She responded well until late, when a nice filly got her." Her jockey Garrett Gomez said, "It wasn't like she ran a bad race or anything. When we turned for home, I thought we were going to win but, the other filly ran us down. I think this was the first time going a mile, and she'll benefit from it. I really got her slowed down at the 4 1/2 furlongs and got a good breather in her and turning for home she really kicked in." 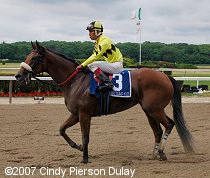 Third place finisher Christmas Kid returns after the race. Trainer Jimmy Jerkens said before the race, "She seems to be doing really good. From top to bottom this race really came up tough, but sheīs training great and she looks real good. I wouldnīt be as confident if she looked she was going backwards. I always thought her best race all along was a mile around one turn." Winner of the Ashland at Keeneland and the Davona Dale at Gulfstream so far this year, she improved her record to 4 wins, 1 second, and 2 thirds with earnings of $551,587. 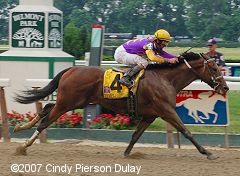 The $250,000 Woody Stephens Breeders' Cup Stakes (G2) featured three-year-olds sprinting 7 furlongs. Deadly Dealer was sent off as the 9-5 favorite in the field of eight, coming into the race off a distant third place finish in the Arkansas Derby. Stormello, 19th in the Kentucky Derby last out, was the 3-1 second choice over 7-2 third choice Street Magician, winner of the Hirsch Jacobs at Pimlico on Preakness day.

Stormello was quickest away and was allowed an uncontested lead of 1 1/2 lengths through a quarter in 22.38 and a half in 44.93, while Deadly Dealer and Street Magician contested second place down the backstretch. The fast pace set the race up for the closers. 8-1 Teuflesberg, who stumbled badly at the start and was last of all at the top of the stretch, split rivals at the 3/16 pole and got a short lead at the 1/8 pole over 11-1 Most Distinguished, who also joined the battle late after racing near the back early. Through the stretch, Teuflesberg drew away to a 2 length win over Most Distinguished, who was 3/4 length ahead of Stormello in third. Favorite Deadly Dealer tired badly in the lane and finished seventh.
Full results chart 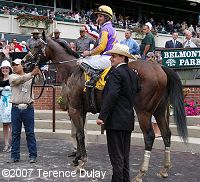 Teuflesberg in the winner's circle. His trainer Jamie Sanders of Teuflesberg said, "I was so excited when I saw him come up the inside during the stretch run. It was unbelievable! We knew what kind of a horse he was going into the race. He has so much class, and he keeps doing it over and over. We were confident. Robby (Albarado) knows him well and he has so much patience with him. He doesn't have to keep sprinting. He can run longer and he has proven that. So, we do have our options." Sanders said he may go next in the Travers or the King's Bishop at Saratoga.

His jockey Robby Albarado said, "He broke a little bit behind the field, but he got back into the race. He has overcome a lot of obstacles in his career, and he showed it today. He has always run good at one turn. He has been well-matched this year, and this was a breath of fresh air for him." 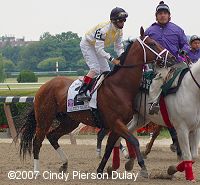 Seventh place finisher and beaten favorite Deadly Dealer in the post parade. His trainer Todd Pletcher said, "(Jockey John Velazquez) said he missed the break a bit and then sat off Stormello. When he moved on Stormello, he said somebody stepped on him from behind. But I haven't seen the replay yet. That was Johnny's excuse." 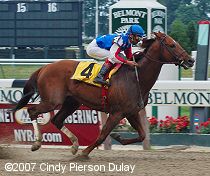 The $200,000 True North Handicap (G2) featured older horses sprinting 6 furlongs. Eight went in this event including even-money favorite Bordonaro, winner of the Count Fleet Sprint last out. In to challenge were Deputy Minister winner Keyed Entry and allowance winner Council Member, each going off at 4-1.

Keyed Entry showed good early speed and battled on the lead with Bordonaro and 10-1 Will He Shine for the first quarter in 22.07 before suddenly bearing out badly and dropping from contention. This allowed Will He Shine to inherit a 2 length lead at the top of the lane after 4 furlongs in 44.38. Under Edgar Prado, Will He Shine opened up a 5 length lead in mid-stretch with 8-1 Suave Jazz closing with a rush after racing near the back early. However, he was left with too much ground to make up as Will He Shine easily held him off by 1 3/4 lengths to get the win in 1:08.70. It was just half a length back to Suave Jazz's entrymate Dashboard Drummer in third, while favorite Bordonaro failed to fire after contesting the pace, fading to seventh at the finish.
Full results chart 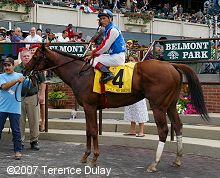 Will He Shine in the winner's circle. His trainer Dale Romans said, "We told (Edgar Prado) in the paddock to just send him, don't try to rate and make one run. He took the race to them when it opened up and held them all off. I think the turf race gave him some bottom. I thought the turf race was a good angle; if he liked the turf, he could win a stakes on it. If he didn't like it, it was a good work. I think he wants to sprint on the dirt. I don't think he wants you to mess with him. He just wants to run."

His jockey Edgar Prado said, "I wanted to save ground and not use him too much early in the race. I let him sit behind the other horses. When I saw the moment, I took my time and let him go without using him too much so he would have something at the end. I'm glad I did because they were coming in the end." 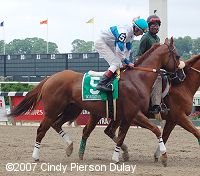 Seventh place finisher and beaten favorite Bordonaro in the post parade. His trainer Bill Spawr said, "That horse (Keyed Entry) was bolting. Richie (Migliore) said he had to use him to keep him up there and to keep that other horse in; otherwise, he was going to wipe us out. He just lost too much ground." His jockey Richard Migliore said, "He broke well. Keyed Entry out-footed him in the first 1/8. My horse was scrambling to keep stride and it took him about an 1/8 mile to find his stride. One we caught up with Keyed Entry, that horse bore out really badly and took us out of the race." 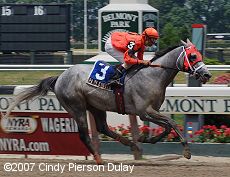 Kicking off the stakes action on Belmont Day was the $100,000 Birdstone Stakes for older horses going 1 1/8 miles. 9-5 second choice Papi Chullo stalked the early pace of 11-1 Naughty New Yorker through fractions of 23.46 and 46.12, then took over the lead after 3/4 in 1:09.62 as Naughty New Yorker tired and dropped out of contention. Papi Chullo drew away through the stretch to win by 5 lengths over late-running 5-4 favorite Hesanoldsalt in a time of 1:47.33. It was just a neck back to 3-1 second choice A.P. Arrow in third. Winning trainer Gary Contessa said, "When he was head-and-head for the lead after the opening half-mile, I thought we were sunk. Everybody wants to beat the champ. If this horse comes out of the race sound, we are going to the Suburban because he deserves a shot at Invasor. I don't know if he's as good as Invasor, but he's a damn good horse."
Full results chart from DRF