The $250,000 Forego Stakes (G1) was the undercard feature on Woodward Stakes day at Saratoga on the Saturday of closing weekend. Lucky Island was sent off as the 3-4 favorite in a field of ten for the 7 furlong sprint for older horses. He was undefeated in 4 starts this year including wins in the Bold Ruler in May and then the Tom Fool in July. In to challenge him included the 9-2 Zayat Stables entry of Forefathers and Premium Wine, and 8-1 third choice First Defence. The Zagat horses both won allowance races in their last starts, while First Defence was second in the Alfred G. Vanderbilt Handicap after winning the Jaipur.

At the start, Lucky Island stumbled and then was pinched back to last down the backstretch. 10-1 Eternal Star battled with First Defence for the first 1/2 mile through fractions of 22.53 and 44.61. Turning for home, jockey Channing Hill asked First Defence for run and got it, as the 8-1 shot quickly opened up a 4 1/2 length lead at the 1/8 pole after 3/4 in 1:08.49, and then drew off late to win by 6 3/4 lengths in 1:21.55 over the fast track. A wall of five horses hit the wire together for the place photo, which determined that 38-1 longest shot Greeley's Conquest was second, a head in front of 24-1 Ferocious Fires third, by a neck over Eternal Star fourth, by a nose over 14-1 Tasteyville fifth, and then another head back to beaten favorite Lucky Island sixth. 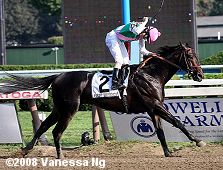 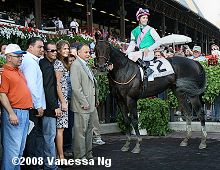 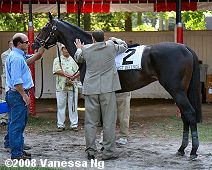 Left: First Defence in the winner's circle with trainer Bobby Frankel at his head. Frankel said, "He ran like we always thought he could run. I was shocked that he ran as good as he did. He has been stopping in his last two races. I was waiting for him to start slowing down, but he kept on going. As fast as he is today, he'll go probably go right to the Breeders' Cup. I was concerned about the 1-post, but he broke with the field and dragged him to the lead. Obviously, he likes this track." 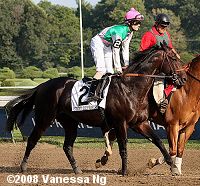 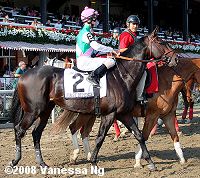 Right: First Defence heads out to the track. Winning jockey Channing Hill, celebrating both his first Saratoga stakes win and his first Grade 1 win, said, "I tried to keep him a little off (the rail) on the backside because Johnny (Velazquez aboard Eternal Star) gave us so much room. Coming to the 3/8 pole, I figured everyone was going to have to start running to catch us. What a nice horse! He went 44 like he was going 47. He just cruised around there. I have to thank Mr. Frankel and the owners so much for putting me on this horse." 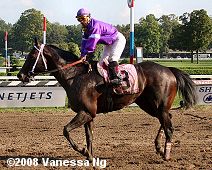 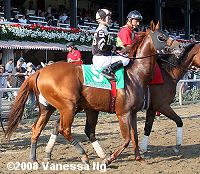 Left: Second place finisher Greeley's Conquest returns after the race. The 38-1 longest shot on the board was bumped at the start by Lucky Island, chased the pace on the outside in fourth most of the way under new jockey Jorge Chavez, then closed well on the outside to get second beaten 6 3/4 lengths. The Gary Thomas trainee improved his record to 6 wins, 3 seconds, and 2 thirds in 15 starts, earning $266,310 for owner Millard R. Seldin.

Right: Third place finisher Fericious Fires heads out for the post parade. The 24-1 shot stumbled at the start, took the ground saving path on the inside in fifth early under regular rider Cornelio Velasquez, then closed late on the inside to get third. The Anthony Dutrow trainee improved his record to 8 wins, 0 seconds, and 1 third in 10 starts, earning $356,267 for owner-breeder Sanford J. Goldfarb. 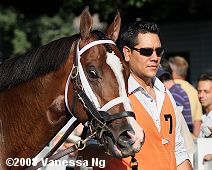 Sixth place finisher and beaten favorite Lucky Island enters the paddock before the race. His trainer Kiaran McLaughlin said, "Obviously, the start. Alan (Garcia, jockey) said he didn't break well. He stumbled, broke poorly, and then got clobbered when he got up. So, he lost all chance. He came flying to make up a lot of ground, but you can't win spotting the field that much ground."