The summer meeting at Saratoga Race Course is one of the most prestigious in the world, and the first Saturday of the 6-week campaign is especially important as the track hosted four Breeders' Cup Challenge "Win and You're In" races. Winners of these events earn an automatic berth in the corresponding Breeders' Cup World Championships races, which will be held on October 25 and 26 at Santa Anita in California. 27,297 fans packed the historic oval in Saratoga Springs on a warm afternoon with temperatures in the mid 80's, with about 20 minutes of rain which ended as horses entered the paddock for the Whitney.

The $750,000 Whitney Handicap (G1) is one of the most important races in the New York stakes calendar, featuring the top older handicap horses of the east going 1 1/8 miles on the main track, with the winner earning a spot in the Breeders' Cup Classic field. A field of 11 entered, with Suburban Handicap runner-up Solar Flare sent off as the lukewarm 7-2 choice over 9-2 second choice Commentator, runner-up in the Metropolitan last time out. Rising Moon, third in the Suburban in his last start, was the 5-1 third choice.

When the gate opened, jockey John Velazquez sent Commentator immediately to the lead breaking from the inside post. He was allowed an uncontested lead of as many as 2 1/2 lengths while setting fractions of 24.16, 47.73, and 1:11.80 over the fast main track. 25-1 Timber Reserve sat in second and favorite Solar Flare to his inside third down the backstretch. On the far turn, Solar Flare put in a mild bid for the lead, dismissing the tiring Timber Reserve and moving within 1 1/2 lengths of the pacesetting Commentator but he flattened out after 7 furlongs and faded late to eventually finish seventh. 8-1 Student Council, 10th early, came out five wide into the stretch and closed with a rush to get second at the 1/8 pole. However, Commentator was already 4 lengths in front at this point, and he cruised under the line ahead by 4 3/4 lengths in 1:50.23. It was a long 8 1/2 lengths back to 7-1 Grasshopper third. 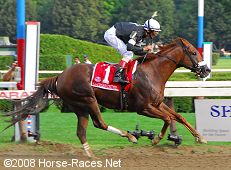 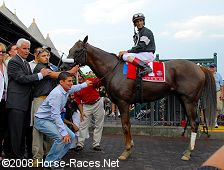 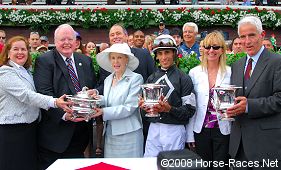 Left: Commentator doesn't look too happy to be in the winner's circle. Winning trainer Nick Zito (far left of photo) said, "This is one of the greatest feats of all time. He gets in that league with Kelso and Forego, which I wanted him to be in so they couldn't take him out. He's in that special league. He's an amazing horse. I think the theme should be, 'If you get old, don't give up.' This is a 7-year-old gelding winning this kind of race against this kind of field. There were 11 horses in this field. This was no easy race and he was carrying the top weight (120 pounds). It was a tremendous effort. This is a special win for me. This has to be up there with the greatest of them all. I am thankful to have a horse of this caliber." 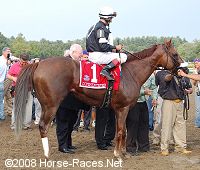 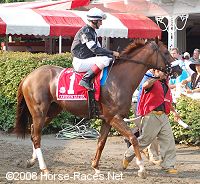 Left: Commentator gets his head sponged off after winning the Whitney. Winning jockey John Velazquez, winning his third race on the afternoon, said, "He broke well and relaxed. He got to the front, and that was it. He ran just as big as he did three years ago." Seven-year-old Commentator, who won the Whitney in 2005, is the second-oldest Whitney winner. Five-time Horse of the Year Kelso won his second Whitney at the age of 8 in 1965. Other than Commentator, only Kelso and Discovery, who each won the race three times, have repeated at Whitney winners. 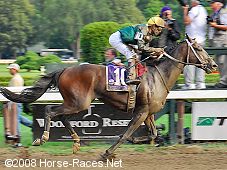 Left: Second place finisher Student Council runs out after the race. His trainer Steve Asmussen said, "We ran a very good race. Commentator, as usual at Saratoga, was very effective. Everybody made a run at him, but when he cut the corner, he was just gone. We are blessed to have two horses (Student Council and Curlin); we were even debating running today up until about a few hours ago because of the options with the handicap horses."

His jockey Shaun Bridgmohan said, "I thought he ran a great race. I couldn't have asked for a lot more from him today. My horse has a particular way in which he runs, and I didn't want to take him out of it. I thought he simply ran a fabulous race." 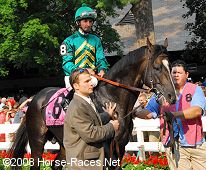 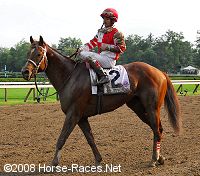 Left: Third place finisher Grasshopper in the paddock before the race. 7-1 shot Grasshopper settled in fourth for the first 6 furlongs under regular rider Robby Albarado, moved up to striking position at the top of the stretch but tired late, finishing third beaten 13 1/4 lengths. The Neil Howard trainee improved his record to 4 wins, 5 seconds, and 2 thirds in 13 starts, earning $760,352 for owner-breeders William S. Farish, Edward J. Hudson, and James A. Elkins.

Right: Seventh place finisher and beaten favorite Solar Flare returns after the race. His trainer Larry Jones said, "There is not much to say. He made a good run at Commentator going around the turn, leveled off and had enough. Right now, everything looks fine, but we'll get a better look at him once we get back to the barn." 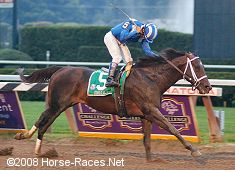 The $250,000 Alfred G. Vanderbilt Handicap (G2) featured the Sprint division, as a field of six older horses contest the Breeders' Cup Sprint distance of 6 furlongs on the main track. Seven originally were drawn but the expected favorite, undefeated Bustin Stones, scratched the morning of the race and has yet to start in a race since winning the Carter Handicap in April. Abraaj was sent off as the 8-5 favorite exiting a close third place finish in the True North Handicap last time out. In to challenge him were 5-2 second choice Thor's Echo, winner of the 2006 Breeders' Cup Sprint but fourth in the True North, and 3-1 third choice First Defence, winner of the Jaipur on turf last out and switching back to the main track.

21-1 longest shot Sammarco battled for the lead with 4-1 third choice Black Seventeen through a quarter in 22.06 and a half in 44.57, while as many as 2 lengths in front of First Defence in third. At the top of the lane, jockey Channing Hill asked Sammarco for run as the longshot opened up a 2 length lead on the tiring Black Seventeen after 5 furlongs in 56.98. However, favorite Abraaj, who raced in fourth early, closed with a rush down the center of the track, running right by First Defence at the 1/16 pole to win going away by 2 1/2 lengths in a time of 1:10.23 over the fast track. It was another 1 1/2 lengths back to Sammarco third.
Results chart 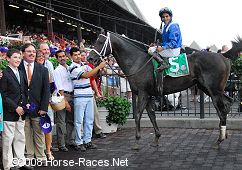 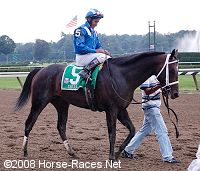 Left: Abraaj in the winner's circle with trainer Kiaran McLaughlin on the left. McLaughlin said, "I wasn't worried about the first quarter. At the 3/8 pole because (jockey Alan Garcia) had to scrub on him a little bit to kick him in. Once he started running, I thought the leader had to slow down. I felt good at the 1/4 pole. Abraaj needed time off from the Vanderbilt last year. The time off did him good. He put on weight, he looks great and sound. We have two nice sprinters for the same owners; we are glad to have Lucky Island in the same barn waiting for the Forego. We might run them both in the Forego, we don't know. It's great for a trainer and owner to know that they are in (for the Breeders' Cup Sprint). They don't have to worry about points or graded earnings. When you're in, you can adjust your schedule accordingly."

Right: Abraaj circles after the race. 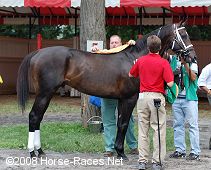 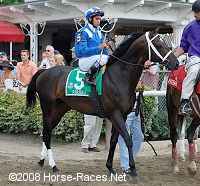 Left: Abraaj gets saddled in the paddock. Winning jockey Alan Garcia said, "I am very proud of my horse. He finished very strong. I don't know why he wasn't running smooth early. When I started riding him, he finally started to get going. Then, he just kept going and ran very, very good." 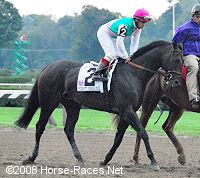 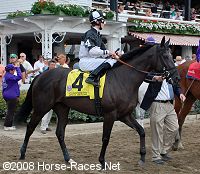 Left: Second place finisher First Defence in the post parade. The 3-1 third choice was well placed along the rail in third under regular rider Javier Castellano, passing the tiring pacesetter Sammarco late but was no match for the winner, beaten 2 1/2 lengths at the line. The Bobby Frankel trainee improved his record to 5 wins, 3 seconds, and 0 thirds in 11 starts, earning $426,534 for owner-breeder Juddmonte Farms.

Right: Third place finisher Sammarco heads out for the post parade. The 21-1 longest shot, making his stakes debut after breaking his maiden last time out, set the pace for the first 5 furlongs under regular rider Channing Hill, weakening under pressure late to hold third, beaten 4 lengths. The Michael Hushion trainee improved his record to 1 win, 2 seconds, and 1 third in 5 starts, earning $74,580 for owner Barry K. Schwartz.