2008 Go For Wand Handicap and The Diana

The summer meeting at Saratoga Race Course is one of the most prestigious in the world, and the first Saturday of the 6-week campaign is especially important as the track hosted four Breeders' Cup Challenge "Win and You're In" races. Winners of these events earn an automatic berth in the corresponding Breeders' Cup World Championships races, which will be held on October 25 and 26 at Santa Anita in California. 27,297 fans packed the historic oval in Saratoga Springs on a warm afternoon where the weather changed from sun to rain before the start of the Go For Wand. Two of the four stakes featured the older fillies and mares.

The $250,000 Go For Wand Handicap (G1) featured a compact field of six older fillies and mares going the Ladies Classic (formerly the Distaff) distance of 1 1/8 miles on the main track. Rains fell before and during the race, but the track remained officially fast. As expected, 2007 Breeders' Cup Distaff winner Ginger Punch was sent off as the 1-5 favorite, exiting two straight runaway victories in the Louisville Handicap at Churchill Downs and the Ogden Phipps Handicap at Belmont Park. In to challenge the Frank Stronach homebred include 9-1 second choice Moon Catcher, fifth in the Ogden Phipps last out, and 10-1 third choice Indescribable, winner of the Arlington Matron before disappointing in sixth in the Chicago Breeders' Cup Handicap, both at Arlington Park.

Moon Catcher was sent to the early lead by jockey Edgar Prado, and she set a pace of 24.04, 49.01, and 1:14.04 over the fast main track while 16-1 Copper State stalked her to her outside and favorite Ginger Punch drafted in behind. At the top of the stretch, Rafael Bejarano angled Ginger Punch out for the drive, allowing her to easily pass the tiring Moon Catcher and move up alongside Copper State at the 1/8 pole, getting the mile in 1:39.84. Ginger Punch easily dismissed that rival over the final furlong, drawing clear to win by 1 1/4 lengths in a time of 1:53.43. It was another 1 3/4 lengths back to late-running Indescribable third. 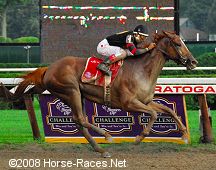 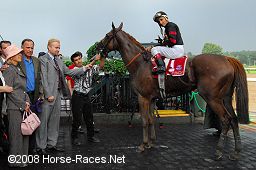 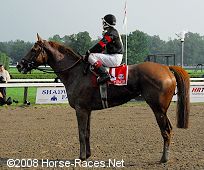 Left: Ginger Punch in the winner's circle. Winning trainer Bobby Frankel said, "She is a champion. I was a little worried about finding a place to run. They all ganged up on her. They were looking for her. When she dropped back inside, the hole finally opened up. We'll probably look at the Beldame next."

Right: Ginger Punch strikes a pose while returning after the race. 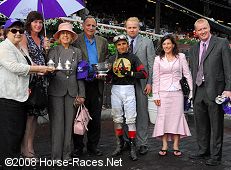 Trophy presentation for the Go For Wand Handicap with trainer Bobby Frankel in the center, owner Frank Stronach's wife Elfrida to the left of him and Stronach's son Andy to the right of jockey Rafael Bejarano. On the far right are Mike Rogers, racing manager for Stronach Stable, and his wife Stacie. 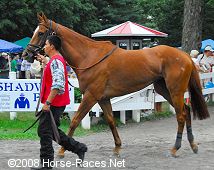 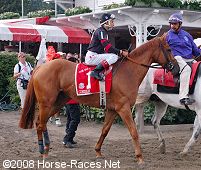 Left: Ginger Punch enters the paddock before the race. Winning jockey Rafael Bejarano said, "I was in perfect position but when I came to the 3/8 pole, I saw that the (Over Under) was completely dead before coming to the turn. So, I tried to look for a spot on the outside. Then, I tried to hold her a little bit and come in through the inside. My filly showed me a big kick because she was a little mad, you know? When I saw (Copper State) in the stretch coming out and still running I tried to come in and get clear. My horse broke really good, but when I saw (Moon Catcher) pushing his horse to get the lead I took her back. Anyway, my horse doesn't like being on the lead. She doesn't have to have the lead. So, I tried to get her to relax and that's why she showed me such a big kick."

Right: Ginger Punch heads out for the post parade. 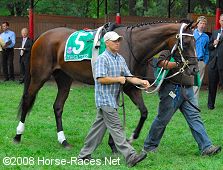 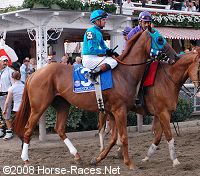 Left: Second place finisher Copper State in the paddock before the race. Her trainer Steve Asmussen said, "I thought she had an ideal set-up. It was a moderate pace there for her, and she made it perfectly. She ran a great second, and Ginger Punch simply beat us late. I am very proud of her race."

Right: Third place finisher Indescribable heads out for the post parade. The 10-1 third choice was unhurried early after breaking slowly under new jockey Kent Desormeaux, suffered traffic trouble most of the way around while back in fifth, but when she got to the outside late she put in a mild rally to get third. The Bill Mott trainee improved her record to 4 wins, 1 second, and 4 thirds in 14 starts, earning $245,802 for owner Donald A. Adam.


The $500,000 Diana Handicap (G1) kicked off the stakes action on Saturday, and featured the Filly and Mare Turf division. A classy, contentious field of ten older fillies and mares contested this 1 1/8 mile trip over the Mellon Turf Course, with Wait a While sent off as the slight 3-1 favorite, exiting a win in the San Gorgonio at Santa Anita. New York Handicap runner-up Dynaforce was the 7-2 second choice in her second U.S. start, over 6-1 third choice Rutherienne, winner of the Jenny Wiley at Keeneland but third in her next two starts, the Gamely at Hollywood and the All Along at Colonial.

23-1 longshot Bayou's Lassie was allowed an uncontested lead of as many as 5 1/2 lengths while setting a pace of 23.47, 46.98, and 1:10.93 over the "good" turf course, with Dynaforce settling in behind in second down the backstretch. At the top of the stretch, the pacesetter Bayou's Lassie tired to an eventual 6th place finish, allowing Dynaforce to inherit the lead after a mile in 1:34.73. 9-1 Forever Together, who trailed the field for the first 5 furlongs, came out 5 wide into the stretch and closed with a rush down the center of the course to get up by 3/4 length at the line, completing the 9 furlong trip in 1:46.52. It was a long 3 1/2 lengths back from Dynaforce to late-running Rutherienne third. 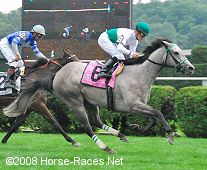 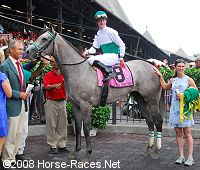 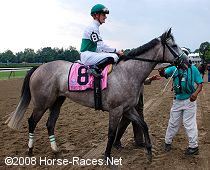 Left: Forever Together in the winner's circle. Winning trainer Jonathan Sheppard said, "We seemed to have a preponderance of turf horses in the barn, and if we find one that seems to be doing okay on the dirt, it gives us some diversity. Mr. (owner George) Strawbridge jokes, `Why do we have nothing but turf horses?' and not we have another one. Whatever we do, we seem to wind up in the same spot. As far as depth goes, this race was solid. Every race had good credentials. I picked up the paper today and four of the horses picked over her, she had beaten in her last start. I suppose if you run a superb race at 45-1, one might think it was a fluke." Sheppard said Together Forever would start next in the Flower Bowl.

Right: Forever Together circles before going to the winner's circle. 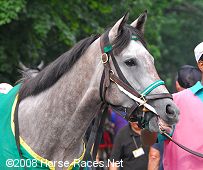 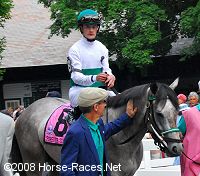 Left: Forever Together in the paddock before the race. Winning jockey Julien Leparoux said, "I was last (early) but it was nothing spectacular. I mean, she was last, relaxed and around the stretch I thought to make a move and come inside. When I got her out, she just took off. So, that was very good. It was a very tough field. I think, for me, she won very easily today. The (turf) is fair for everybody, I think, so that won't be an excuse, for anybody. I think she's a very nice filly."

Right: Forever Together heads out of the paddock for the track. 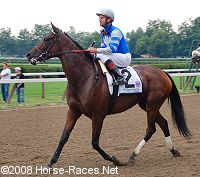 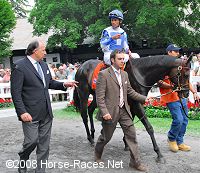 Left: Second place finsher Dynaforce and jockey Kent Desormeaux return after the race. Her trainer Bill Mott said, "She ran her heart out. She was in great position. She was where we wanted her, right behind the pace. She just got caught in the end." Jockey Kent Desormeaux had 4,999 career wins at the start of the day, but failed to win and has yet to reach the milestone 5,000th victory. This race was the closest he came to achieving the feat.

Right: Third place finisher Rutherienne in the paddock with trainer Christophe Clement. The 6-1 third choice raced near the back of the field for the first 7 furlongs under jockey Garrett Gomez, came out wide into the lane and closed well to get third beaten just 4 1/4 lengths. The Christophe Clement trainee improved her record to 9 wins, 0 seconds, and 3 thirds in 14 starts, earning $852,255 for owner-breeder Virginia Kraft Payson LLC. 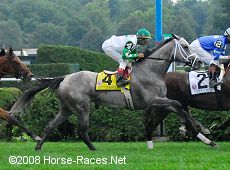 Seventh place finisher and beaten favorite Wait a While. Her trainer Todd Pletcher said, "She didn't run like we thought she was going to. We're going to take her back to the barn and make sure everything is okay."