The $500,000 Jim Dandy Stakes (G2) was contested at Saratoga on Sunday afternoon, before a reported crowd of 38,748, although that number was inflated to at least double by spinners there for a Saratoga cap giveaway. Fans were treated to a partly sunny day with temperatures around 80, with overnight rains along with a passing thunderstorm midway through the card rendering the main track "good". A field of seven 3-year-olds (after Alaazo scratched) went to post in this 1 1/8 mile main track feature, with Pyro sent off as the 3-2 choice exiting a win in the Northern Dancer Stakes at Churchill Downs. Earlier in the year he won both the Risen Star and Louisiana Derby at the Fair Grounds before being well-beaten in both the Blue Grass and Kentucky Derby. In to challenge the Steve Asmussen trainee were 7-2 second choice Da' Tara, making his first start since his upset victory in the Belmont Stakes for trainer Nick Zito, and 9-2 third choice Mint Lane, entering this race off 2 straight wins, in the Postponed and the Dwyer, both at Belmont.

When the gate opened, jockey Alan Garcia hustled Da' Tara to the early lead and he got the initial quarter mile in 23.51 while being challenged by Mint Lane on the clubhouse turn. Mint Lane took over the lead on the backstretch, getting the half in 46.94 and 3/4 in 1:11.82 while Da' Tara stayed stalked him from about a length behind. Turning for home, the fast pace duel between them took its toll as both tired badly, allowing 8-1 Tiz Now Tiz Then, who raced in fifth early, to come three wide into the stretch to take over the lead at the 3/16 pole, getting the mile in 1:38.01. 8-1 Macho Again, who saved ground around both turns in third, and Pyro, who was unhurried in 6th early, both came wide into the stretch for their late rallies. Macho Again surged to the front inside the 1/8 pole, and was all out to hold off Pyro in the final strides to prevail by 1/2 a length in 1:51.16 over the good main track. It was another 3/4 length back to Tiz Now Tiz Then third. 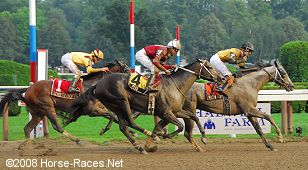 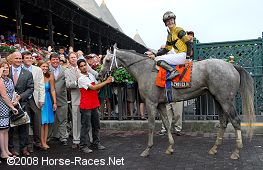 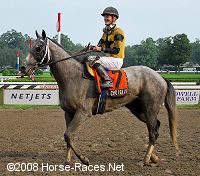 Left: Macho Again in the winner's circle. Winning trainer Dallas Stewart said, "This is my first stakes win as a trainer at Saratoga, so I am very excited. He's a good horse, but he needed to step up. The pace was beautiful; he's a stalker. The Travers would be great if he comes out of this good and everything is good. I feel blessed to train for West Point. They are wonderful people and he is a wonderful horse. He had a tough go from the 1/4 pole on. Once he got free and kicked on, it looked like he was going to win, and here comes Pyro with that late run. And Pyro is a good horse, as you know." 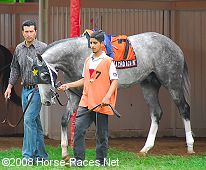 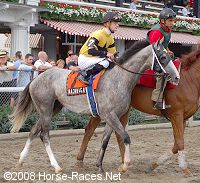 Left: Macho Again in the paddock. Winning jockey Julien Leparoux said, "He's game. The race before, he had a rough trip. He's been coming out. Today, he ran very good off the layoff. I had to go outside in the stretch and he finished very good. When I won the Derby Trial and when I finished second in the Preakness, he was game and he was really good. He's not much different; he hasn't changed too much. He is still just a game horse. He tries all the time."

Right: Macho Again heads out for the post parade. 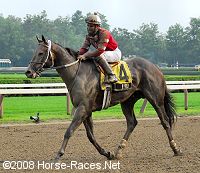 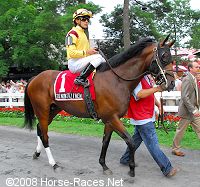 Left: Second place finisher and beaten favorite Pyro returns after the race. His trainer Steve Asmussen said, "We finished second. There is nothing more I can say. Go talk to the winner." His jockey Shaun Bridgmohan added, "I thought I had a good trip. He ran hard."

Right: Third place finisher Tiz Now Tiz Then heads out of the paddock before the race. His trainer Eoin Harty said, "I thought it was a nice, third-place finish. Certainly, we would have liked to win it. He keeps improving. I thought the rider (Miguel Mena) did a good job for his first time at Saratoga. There is certainly a possibility that we will be back for the Travers." 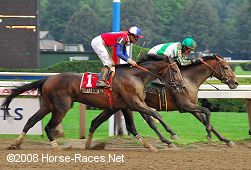 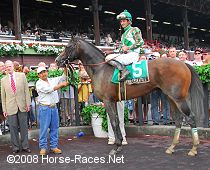 Immediately before the Jim Dandy, another field of seven 3-year-olds also went 1 1/8 miles in the $90,000 Henry Walton Stakes, restricted to horses who have not won a graded stakes this year. Harness racing fans might jokingly call this race the "Jim Dandy Consolation" given the quality of the field. 9-1 Tizbig battled for the lead with 7-1 Pascal through fractions of 23.31, 47.47, and 1:12.67, before the fast pace over the tiring wet track took its toll. 5-1 You and I Forever, who stalked them in third early, inherited the lead in midstretch after a mile in 1:38.39, but 2-1 favorite Mambo in Seattle, who was unhurried in 6th early, hooked him inside the 1/8 pole and prevailed by a neck in the final strides, completing the trip in 1:50.98. It was a long 12 1/2 lengths back to late-running 8-1 Amped in third.
Results Chart The feature race on the first Friday of the Saratoga meeting was the $150,000 Lake George Stakes (G2). Just six 3-year-old fillies went to post in this 1 1/16 mile inner turf feature before a crowd of just 20,626. French import Mousse au Chocolat was sent off as the 9-5 favorite exiting a second place finish in the Prix de Sandringham at Chantilly last time out. My Princess Jess was the 2-1 second choice off 2 straight wins in the Gaviola at Belmont and the Boiling Springs at Monmouth Park. Edgewood Stakes winner Zee Zee was the 3-1 third choice, exiting a 3rd place effort in the Regret.

17-1 longest shot Stealin' Kisses set a pace of 25.24, 50.14, and 1:14.59 over the soft turf course, while as many as 1 1/2 lengths ahead of 8-1 Alwajeeha in second. Entering the stretch, Stealin' Kisses tired and dropped from contention allowing Alwajeeha to inherit the lead at the 1/8 pole. However, My Princess Jess, who stalked the pace in third the whole way, came through between horses after being boxed in at the top of the lane, closing with a rush to prevail by 3/4 length in 1:44.00. It was another 2 lengths back from Alwajeeha to late-running Zee Zee third. Favorite Mousse au Chocolat disappointed in her U.S. debut, finishing last. There was a brief stewards' inquiry into the stretch run but the result was allowed to stand. 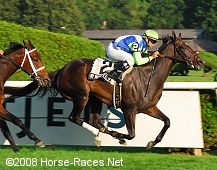 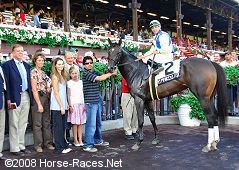 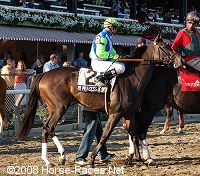 Left: My Princess Jess in the winner's circle. Winning trainer Barclay Tagg said, "You don't like to lose races (after an inquiry), especially after you win them. I wasn't too worried about her getting through. She's pretty gutsy. She has run on soft turf, but not against this type of competition. She has a lot of ability and courage, and she showed that today. We'll skip the Lake Placid. She has run back-to-back gutsy races; we want to give her a break and look at the Garden City (at Belmont) and Queen Elizabeth II (at Keeneland)."

Right: My Princess Jess heads out for the post parade. Winning jockey Eibar Coa said, "She was a little closer than I wanted her to be, and I had to take a kind of big hold on her. She didn't like it. That's why she was throwing her head up. But I think, back there, she relaxed and I was in a good position all the way to the 1/4 pole. Then, I had nowhere to go. I needed to wait for a little bit of room. When I finally got it, she helped me out, splitting horses nice. She ran like much the best." 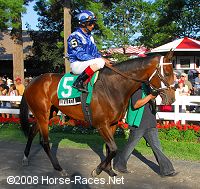 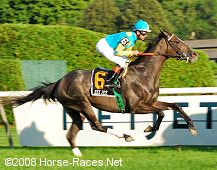 Left: Second place finisher Alwajeeha in the paddock before the race. The 8-1 shot stalked the pace in second the whole way under regular rider John Velazquez, briefly took over the lead in mid stretch, but was caught late. The Kiaran McLaughlin trainee improved her record to 2 wins, 3 seconds, and 0 thirds in 7 starts, earning $175,260 for owner-breeder Shadwell Farm.

Right: Third place finisher Zee Zee as they pass by for the first time. The 3-1 third choice raced in fourth early under regular rider Kent Desormeaux, then closed three wide into the stretch to get third, beaten 2 3/4 lengths. The Bill Mott trainee improved his record to 3 wins, 1 second, and 2 thirds in 8 starts, earning $320,047 for owner Zayat Stables LLC.