The Independence Day weekend at Belmont Park ended with two stakes races on Sunday afternoon before just 5,653 in attendance. Racing conditions were ideal, with cloudy skies and temperatures in the high 70's.

The feature event is the $200,000 Dwyer Stakes (G2) for 3-year-olds going 1 1/16 miles on the main track, a key prep for the two big races for this division at Saratoga, the Jim Dandy and the Travers. Mint Lane was sent off as the 3-5 favorite in the field of six, exiting a 6 length romp in the Postponed Stakes at Belmont after finishing second in the Peter Pan. In to challenge the Jimmy Jerkens trainee were 4-1 second choice Ready's Image, winner of the Adjudicating Stakes in May but seventh in the Woody Stephens last time out, and 5-1 third choice Halo Najib, returning to the main track after finishing fourth in two straight turf starts at Churchill Downs, the Crown Royal American Turf and the Jefferson Cup.

As expected, jockey Eibar Coa sent Mint Lane to the lead exiting the chute and he set a quick pace of 23.55, 46.59, and 1:11.01 well off the rail while being stalked by Ready's Image and 33-1 longest shot Tizbig. Ready's Image tired and dropped out of contention after 3/4 mile, as Mint Lane opened up at the head of the stretch. Tizbig gained steadily through the stretch but was no match for Mint Lane, who cruised under the line 2 3/4 lengths clear in 1:44.29 over the fast main track. It was a long 4 3/4 lengths more to late-running 9-1 Pascal in third. 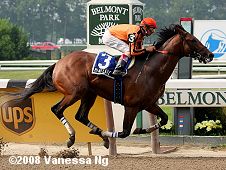 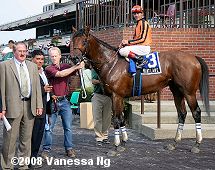 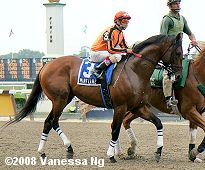 Left: Mint Lane in the winner's circle. His trainer Jimmy Jerkens said, "By today's standards, he is running a little more often than the average horse. He's stayed fit since his last race, held his flesh well, so we ran him. We'll take him to Saratoga. The Jim Dandy comes up a little quick. I would love to keep him here in New York. You don't want to over-race him and take all the fun out of it for him. We will definitely consider the Travers. He's been clicking along at good fractions and turning bids back and keeps going and has something in the tank, its unbelievable. He didn't get him pulled up until all the way around the turn, so maybe he can get 1 1/4." 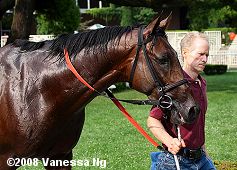 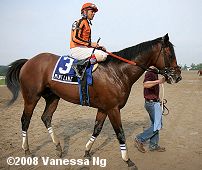 Left: Mint Lane heads for the winner's circle. His jockey Eibar Coa said, "The way he won last time, I didn't think they were going to let him do the same thing. So, they were going to go after him. He's been just good enough to hold that speed and keep going. He definitely can go longer, and I believe he is going to have a nice summer."

Right: Mint Lane heads back to the barn after the race. 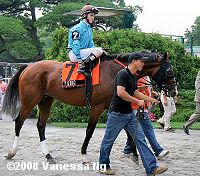 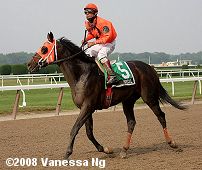 Left: Second place finisher Tizbig heads out of the paddock before the race. Tizbig is trained by Hall of Fame conditioner Allen Jerkens. His son Jimmy, who trains the winner, said of his father finishing second with the longest shot on the board, "You can never count him out." The son of Tiznow was 5 wide throughout under jockey Channing Hill and finished well to hold second, 4 3/4 lengths ahead of the rest of the field. He improved his record to 1 win, 2 seconds, and 2 thirds in 10 starts, earning $73,114 for owner Long Bay Stable LLC.

Right: Third place finisher Pascal returns after the race. 9-1 fourth choice Pascal stayed on the inside in fourth down the backstretch under new jockey Cornelio Velasquez, moved up to second at the top of the stretch but could not sustain his run, finishing third beaten 7 1/2 lengths. The Gary Contessa trainee improved his record to 5 wins, 4 seconds, and 1 third in 13 starts, earning $110,150 for owners Winning Move Stable, Sanford H. Robbins, and Orchard Kids Stable. 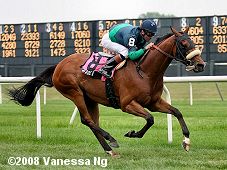 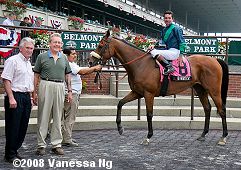 Immediately before the Dwyer, a field of ten New York-bred older horses went in the $75,000 Thunder Puddles Stakes at 1 1/16 miles on the turf. 23-1 longshot Retribution sprinted away from the field down the backstretch, opening up a lead of eight lengths at the half as he set fractions of 23.54, 46.95, and 1:11.96 over the good course. However, he tired from his fast pace after 6 1/2 furlongs, setting the race up for the closers. 5-2 favorite Banrock, who was sixth early, circled past the field four wide on the far turn, taking over he lead at the 1/8 pole and drawing clear to win by 1 3/4 lengths over late-running 7-2 Gimme Credit in 1:42.27. It was another 1 1/2 lengths back to 39-1 Classic Pack third.
Results Chart

The win was the 4,997th for jockey Kent Desormeaux, aboard the gelded son of Go for Gin. The Thomas Bush trainee improved his career record to 6 wins, 3 seconds, and 3 thirds in 19 starts, earning $297,073 for owner-breeder Nyala Farm.