The Independence Day card at Belmont Park featured two Grade 2 stakes races for sprinters. A crowd of 11,123 was on hand on a wet holiday Friday for the festivities. Rains midway during the card quickly downgraded the main track from fast during the undercard to muddy for the stakes races.

The $200,000 Tom Fool Handicap (G2) featured a field of just five older horses going 7 furlongs on the main track. Tasteyville, winner of the Sport Page at Aqueduct in October and a allowance at Belmont in May, was sent off as the 5-4 favorite over 3-2 second choice Lucky Island, coming into the race off a three race win streak including the Bold Ruler at Belmont last time out. 4-1 Premium Wine, a disappointing 8th in the Metropolitan Handicap, rounded out the top three on the board.

Jockey Alan Garcia sent Lucky Island to the front soon after the start and he set quick early fractions of 22.84 and 45.37 over the muddy going, while being stalked by Tasteyville just a length behind and to his outside down the backstretch. At the 3/16 pole, Garcia asked Lucky Island to open up and he did so with authority, leaving Tasteyville in his wake. Lucky Island cruised under the line 4 1/4 lengths clear in a time of 1:22.73. It was just a length back to Premium Wine who ran third the whole way and could not improve position late. 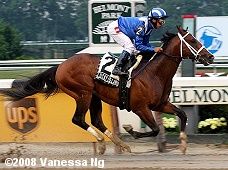 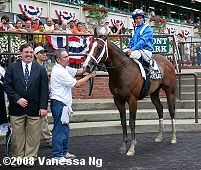 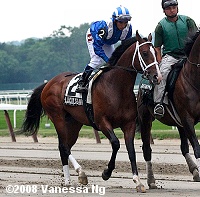 Left: Lucky Island in the winner's circle. Winning trainer Kiaran McLaughlin said, "You know, he broke show sharp, that was the key. We thought we might be cleared, but Alan did a great job of getting him away from there. He always had a lot of horse. He's a very, very nice horse. We are so happy with him. Next, we are looking at the Forego (at Saratoga)." 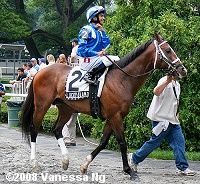 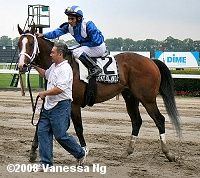 Left: Lucky Island heads out of the paddock before the race. Winning jockey Alan Garcia said, "My horse was so sharp and he broke so good. I had a ton of horse all the way around. When I asked him at the end, he acted like the race was just starting again. I was so confident with him. He had a little adjusting to do from Argentina, but now he loves it here." 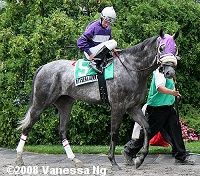 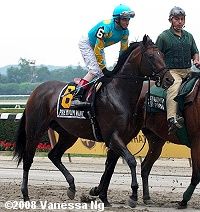 Left: Second place finisher and beaten favorite Tasteyville heads out of the paddock before the race. The 5-4 favorite pursued Lucky Island on the outside the whole way under jockey Mike Luzzi, but had no answer to the winner's late kick, finishing second. The Pat Kelly trainee improved his record to 6 wins, 7 seconds, and 4 thirds in 27 starts, earning $395,205 for owner-breeder Fox Ridge Farm.

Right: Third place finisher Premium Wine in the post parade. The 4-1 third choice dropped back early after breaking sharply under jockey John Velazquez, and gained steadily on the leaders to hold third place at he finish. The Anthony Dutrow trainee improved his record to 5 wins, 4 seconds, and 2 thirds in 13 starts, earning $384,450 for owner Zayat Stables LLC.

The distaff counterpart to the Tom Fool is the $150,000 First Flight Handicap (G2), for older fillies and mares also going 7 furlongs on the main track. Rite Moment was sent off as the 2-1 favorite in the field of seven, exiting a runner-up finish in the Shuvee at Belmont in May after winning the Bed o'Roses at Aqueduct in April. In to challenge her were 7-2 second choice Wild Gams, winner of the My Juliet at Philadelphia Park last time out, and 4-1 third choice Baroness Thatcher, third in the Vagrancy Handicap last out after finishing a close second in the Humana Distaff at Churchill Downs.

6-1 fifth choice Any Limit made the lead with ease under jockey Cornelio Velasquez, and she set the pace while off the rail getting fractions of 22.58 and 45.40 over the muddy, sealed track. Favorite Rite Moment stayed close to the pace the whole way. Entering the stretch, Any Limit continued to lead but Wild Gams, who had raced at the back of the field early, came out four wide on the turn to challenge. The pair hooked up inside the 1/8 pole after 3/4 in 1:10.20, but Any Limit refused to let the favorite by, holding on to win by a neck in 1:23.86. It was another 1 1/2 lengths back to favorite Rite Moment third. 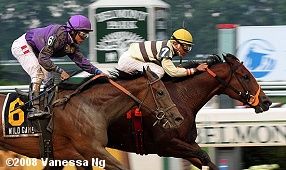 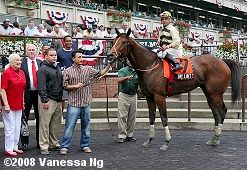 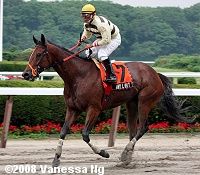 Left: Any Limit in the winner's circle. Winning trainer H. Allen Jerkens said, "That really made me feel good! She could have been retired. Mr. (owner Joseph) Shields said, `It's fun to have a horse running.' I was a little concerned when it started raining, but it stopped in time. There wasn't a lot of mud flying, it was perfect. The six we

Right: Any Limit returns after the race. 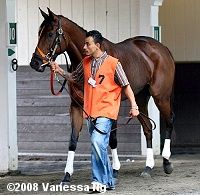 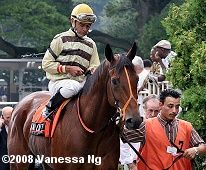 Left: Any Limit in the paddock before the race. Winning jockey Cornelio Velasquez said, "Today, she was nice and relaxed. Turning for home, I still had a lot of horse. Three-quarters is a little short for her, and last time, she the filly that out-ran her went too fast. The change in track condition was not a concern. But she was in great condition and ready to run."

Right: Any Limit heads out of the paddock for the post parade. 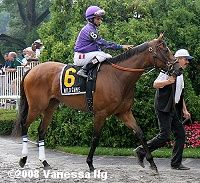 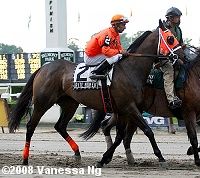 Left: Second place finisher Wild Gams heads out of the paddock before the race. The 7-2 second choice raced wide the whole way, trailing the field early under jockey Alan Garcia, then unleashed a 4-wide sweep into the lane, closing the gap quickly, but unable to pass Any Limit in the final 1/16. The Ben Perkins Jr. trainee improved her record to 8 wins, 5 seconds, and 1 third in 21 starts, earning $898,486 for owner-breeder New Farm.