Memorial Day weekend stakes action at Belmont Park continued on Sunday with the $150,000 Vagrancy Handicap (G2). Just five older fillies and mares went to post in this 6 1/2 furlong main track sprint, before an on-track crowd of 8,875. Dream Rush was sent off as the 4-5 favorite, making her first start since finishing fifth in the Breeders' Cup Filly and Mare Sprint last October. In to challenge her were 5-2 second choice Baroness Thatcher, second in the Humana Distaff at Churchill Downs last time out, and 5-1 third choice Any Limit, third in the Upper Noosh Stakes at Belmont just 8 days ago.

As expected, Dream Rush was quickest out of the gate and opened up a commanding lead of as many as 4 lengths while setting fast fractions of 22.04 and 45.22 over the fast track. Any Limit sat back in second while Baroness Thatcher was third. Dream Rush led the field into the final furlong, but 10-1 Looky Yonder, who was at the back of the field down the backstretch and on the turn, passed tiring horses at the top of the stretch and closed down on the rail, passing Dream Rush with 30 yards to go and pulling away to a hard-fought 1 length upset victory in 1:17.63. It was a long 8 1/4 lengths back from favorite Dream Rush to Baroness Thatcher third. 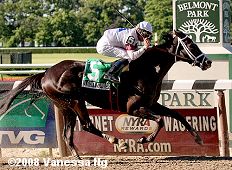 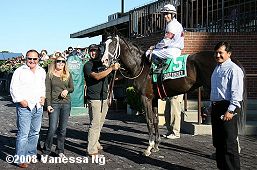 Looky Yonder in the winner's circle. Winning trainer Richard Dutrow Jr. (left) said, "I told Garrett in the paddock to hope for second and plan on that. I didn't like the timing of the race for us. I did think we had a legitimate chance to be second or third. It worked out better than we hoped. She must really like this track. We're going to let her party and relax and get over this one. This was an amazing run by her, and she will need 40-50 days off." 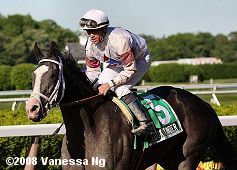 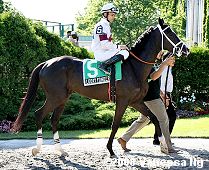 Left: Looky Yonder returns after the race. Winning jockey Garrett Gomez said, "It's nice to have a filly so versatile. In the paddock, Rick (Dutrow)told me to let her run her race. She took the dirt nicely."

Right: Looky Yonder leaves the paddock before the race. 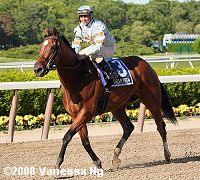 Second place finisher and beaten favorite Dream Rush returns after the race. Her trainer Richard Violette Jr. said, "She ran hard. Seven months off is a long layoff, and this was not an 'other than' (allowance race). There were some nice fillies in there, and you knew she was going to be sharp. She got a little tired at the end. But she's back, and this race will only help her." Her jockey Eibar Coa added, "She did everything right, she just got a little tired." 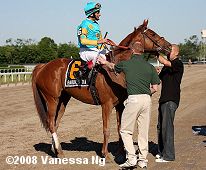 Third place finisher Baroness Thatcher gets unsaddled after the race. The 5-2 second choice sat in third while racing wide the whole way around under jockey John Velazquez, but tired in the stretch, beaten 9 1/4 lengths but holding 3rd place by a length over late-running Any Limit. The Bill Mott trainee improved her record to 4 wins, 0 seconds, and 3 thirds in 11 starts, earning $152,835 for owner Zayat Stables LLC.