Along with Belmont Stakes day, Memorial Day weekend is an important one on the New York racing calendar. The feature race on the Saturday card is the $150,000 Sheepshead Bay Handicap (G2), a 1 3/8 mile trip over the inner turf course for older fillies and mares. A field of eight went to post before the on-track crowd of 6,964, with Mauralakana sent off as the 8-5 favorite exiting a win in the Mairzy Doates Handicap at Calder at the same distance and surface. In to challenge her were 3-1 second choice Hostess, winner of the Orchid Handicap at Gulfstream last out, and 4-1 J'ray, who was second to Maurakana in the Doates.

9-1 fifth choice Herboriste went to the lead first time past the stands and set a slow pace of 24.38, 49.38, 1:14.60, ad 1:39.06 while being stalked by 16-1 Ochre just a length behind. At the top of the stretch, Ochre tired and dropped back to finish seventh, but favorite Mauralakana, who was sixth down the backstretch, came out three wide on the turn, closed with a rush to pass the pacesetter at the 3/16 pole, and drew off to a 3 length victory in 2:14.69 over the firm course. It was just 1/2 a length back from Herboriste to late-running Hostess in third. 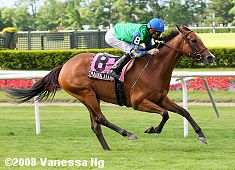 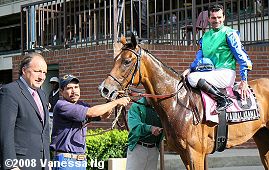 Mauralakana in the winner's circle with trainer Christophe Clement on the left. Clement said, "She showed a great turn of foot at Calder and a great turn of foot today. She was very relaxed for Kent. Usually, she is a bit strong. She is a good filly; a nice horse. She was bought as a broodmare prospect for Australia. The plan is for her to be covered by September 1, and then go to Australia. So, we will be looking at the Beverly D. at Arlington Park. Of course, things could change." 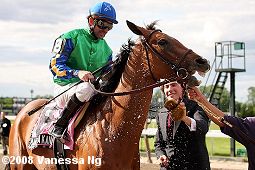 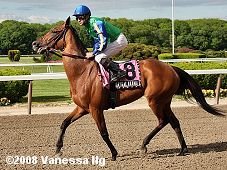 Left: Mauralakana returns after the race.

Right: Mauralakana gets cooled down with some water. Winning jockey Kent Desormeaux said, "That was a scintillating turn of foot - and a lovely ride, too! Chris had her breathing fire today." 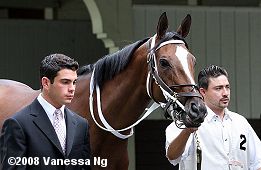 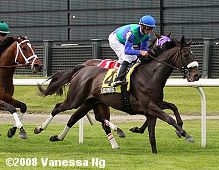 Left: Second place finisher Herboriste leads first time by. The 9-2 fifth choice sprinted clear soon after the start and set a moderate pace under jockey Garrett Gomez, but was no match for Mauralakana late. The Michael Matz trainee improved her record to 2 wins, 2 seconds, and 3 thirds in 15 starts, earning $130,329 for owner Amelie Ehrnrooth.

Right: Third place finisher Hostess in the paddock before the race. The 3-1 second choice was hard held in hand by jockey John Velazquez early, split horses while rallying on the turn, and finished willingly to get third place. The H. James Bond trainee improved her record to 3 wins, 3 seconds, and 6 thirds in 18 starts, earning $288,708 for owner William Clifton Jr. 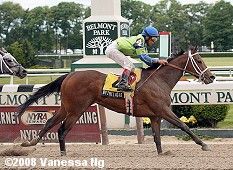 The undercard feature on Saturday was the $75,000 Pearl City Stakes for 3-year-olds sprinting 6 furlongs on the main track. 9-10 favorite By The Light raced at the back of the field early, behind the fast pace of 22.11 and 45.25 set by 2-1 second choice Lady Chace. The pacesetter tired to eventually finish last, as 6-1 Throbbin' Heart took over the lead after 5 furlongs in 57.34. By the Light closed with a rush, passing Throbbin' Heart at the 1/16 pole and drew off to win by 1 1/2 lengths in 1:10.00. It was another 1 1/2 lengths back to 5-1 Overandabeauty third.
Full results chart 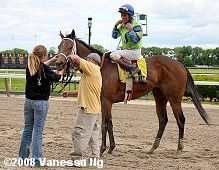 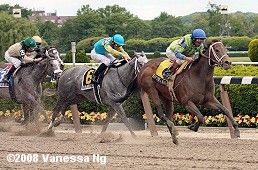 Left: By the Light returns after the race. With the victory, the Richard Dutrow-trained By The Light stretched her unbeaten streak to 5 wins in 5 starts, earning $497,565 for owner Jay Em Ess Stable. This is her fourth straight stakes victory, after winning the Lady Finger Stakes and the New York Breeders Futurity both at Finger Lakes, and then the Delta Princess at Delta Downs.