The $200,000 Peter Pan Stakes (G2) at Belmont Park is the major local prep for the Belmont Stakes, for horses who bypassed both the Kentucky Derby and the Preakness Stakes. Only 6,023 fans were on hand on a sunny but cool Saturday afternoon for the two graded stakes races on the card. In the main event, the Peter Pan Stakes, a field of nine 3-year-olds faced the starter in this 1 1/8 mile test around one turn of the main track with the Japanese two-horse entry of Casino Drive and Spark Candle sent off as the 5-4 favorites. Casino Drive was making only his second lifetime start, after winning his debut by 11 1/2 lengths going the same distance and surface at Kyoto last time out, while Spark Candle was a distant 12th in an allowance at Nakayama last time out. In to challenge the invaders were 7-2 second choice Ready's Echo, a close second in an allowance at Keeneland last out, and 9-2 third choice Tomcito, sixth in the Lexington last out after finishing third in the Florida Derby.

19-1 Mint Lane went to the lead exiting the chute and battled with Spark Candle on the front end through fractions of 23.08, 46.31, and 1:10.47. Casino Drive settled in fourth about 2 lengths off the pace, while off the rail. Turning for home, jockey Kent Desormeaux took Casino Drive out wide for room, and the favorite passed the pacesetters easily, while stablemate Spark Candle faded to finish sixth. Casino Drive opened up a 2 1/2 length lead at the 1/8 pole after a mile in 1:35.26, and drew away late to win by 5 3/4 lengths over Mint Lane in 1:47.87. It was just 1/2 a length back to late-running Ready's Echo third. 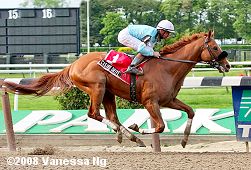 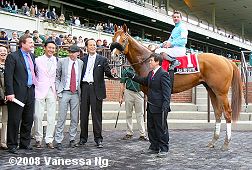 Casino Drive in the winner's circle. Nobutaka Tada, representing owner Hidetoshi Tamamoto said, "Today, he proved his ability. He had so much to overcome: only one race, more than 2 month layoff, long trip and quarantine. Now, we have 3 weeks to go to the Belmont Stakes and he has 3 weeks to improve. And he has so much potential to improve. He likes it here at Belmont Park. He feels like he's home. He's an American-bred, so he is home." On being fractious in the paddock, Tada added, "He's only had one race, and this is the first time he's been nervous, here in New York. He'll be okay next time." 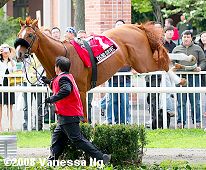 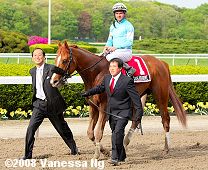 Left: Casino Drive acts up in the paddock. Winning jockey Kent Desormeaux said, "I certainly understand how Jazil and Rags to Riches won the Belmont. Yeah, he can run a lot. It's going to be fun. He's a phenomenal talent, and we've got our hands full with this one. It's going to be ultimately exciting for all of the fans. He's got that stride." Asked about Casino Drive acting up in the paddock, he said, "That was just playful exuberance. There wasn't a hair turned on his body."

Right: Casino Drive circles after the race. Winning trainer Kazuo Fujisawa said, "He ran very good, in spite of it being so long since his last start. I think he will be getting better from now on, and I look forward to his next race, the Belmont Stakes." 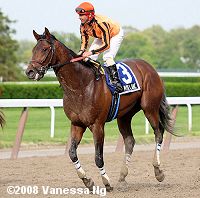 Second place finisher Mint Lane returns after the race. His trainer Jimmy Jerkens said, "I thought he ran game. He had to go faster than he is used to early, but I was pleased." Jockey Eibar Coa addedd, "I was going a little bit too fast. And I was really hoping I could go 48 on the front end. They (Casino Drive and Spark Candle) had the race set up, because (Spark Candle) was next to me the whole way and I never had a shot to relax my horse. At the top of the stretch, Casino Drive went right by me and he had the race won. My horse was clearly second best. He tried hard and I think he will be okay." 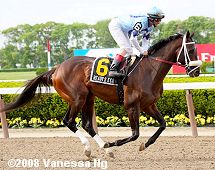 Third place finisher Ready's Echo in the post parade. His jockey John Velazquez said, "He needed to break better for us to catch up today. He tried his best, but he was still too far back, especially against a horse that ran away with it at the end."


The undercard feature on Peter Pan day is the $100,000 Bold Ruler Handicap (G3), a 6 furlong sprint for older horses. Executive Fleet was sent off as the 2-1 favorite in the 7 horse field, exiting a close second place finish in the Carter Handicap last time out. In to challenge him were 3-1 second choice Forefathers, fourth in the Commonwealth at Keeneland in April, and 7-2 third choice Lucky Island, winner of two straight allowance events and making his stakes debut.

8-1 Man of Danger sprinted clear of the field along the inside, getting the quarter in 21.95 and the half in 45.06 while being stalked by Lucky Island. Entering the stretch, Lucky Island came out wide for room and closed the gap on the pacesetter, pulling up alongside at the 1/8 pole. He kicked clear in the final 1/16 mile to win going away by 2 1/4 length in 1:09.14. It was 2 lengths back from Man of Danger to late-running Forefathers third, while favorite Executive Fleet sat close to the pace in fourth early but faded late to finish sixth. 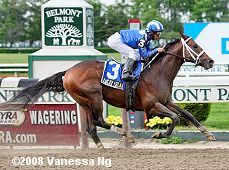 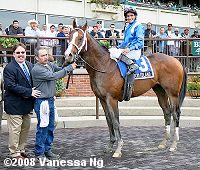 Lucky Island in the winner's circle. Winning trainer Kiaran McLaughlin (far left) said, "He's a very nice horse. The first time we ran him, he bled. We were thinking of sending him to Dubai, which is why he ran without Lasix. Now, he is 3-for-3 for us on Lasix. This was a big step up from a two other than. He proved he belonged. He looked great in there. By the fall, we could stretch him out. We'll keep him sprinting for now." 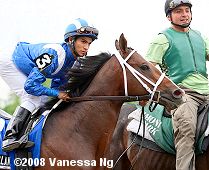 Lucky Island in the post parade. Winning jockey Alan Garcia said, "He's a nice horse. Kiaran did a great job with this horse. I thought he was the best horse coming into the race, and the race set up for me really, really good. My horse was a little slow early, but I managed to save ground. Turning for home, I knew I had the best horse." 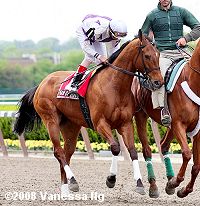 Second place finisher Man of Danger in the post parade. He led the field for the first five furlongs under new jockey John Velazquez, when passed by the winner inside the 1/8 pole. The Bruce Levine trainee improved his record to 9 wins, 5 seconds, and 2 thirds in 26 starts, earning $340,395 for owner Stephen S. Atkins. 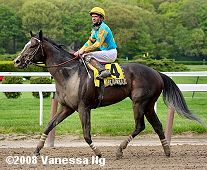 Third place finisher Forefathers returns after the race. He sat off the pace in sixth early, came out five wide into the lane and closed on the far outside, finishing 4 1/4 lengths back. The Bill Mott trainee improved his record to 2 wins, 4 seconds, and 1 third in 12 starts, earning $138,260 for owner Zayat Stables LLC.