The $750,000 Toyota Blue Grass Stakes (G1) at Keeneland Race Course is the major Kentucky prep for the Kentucky Derby and the Triple Crown, and historically has yielded the most Derby winners. A field of twelve 3-year-old colts went to post in this 1 1/8 mile trip over the Polytrack on a chilly, cloudy day with temperatures in the 40's, before a crowd of 26,000. Pyro, winner of two straight events at the Fair Grounds, the Risen Star and the Louisiana Derby, was sent off as the even-money favorite over 7-1 second choice Cool Coal Man, winner of the Fountain of Youth in his last start. Laurel Futurity and Tropical Park Derby winner Cowboy Cal was the 8-1 third choice, making his first stakes appearance on the main track after excelling on the turf.

As expected Cowboy Cal went to the lead right away and he set easy fractions of 24.96, 49.01, and 1:13.17 while as many as 1 1/2 lengths ahead of the rest of the field. Pyro, who was slowest out of the gate, sat back in eighth down the backstretch. Turning for home, 9-1 third choice Monba, who stalked the pace in second out 6 wide most of the way around, moved up to challenge for the lead. Monba hooked up with Cowboy Cal inside the 1/8 pole, and after a brief battle, Monba pushed ahead to win by a neck in a time of 1:49.71 over the fast track. It was another 1 1/4 lengths back to 28-1 longshot Kentucky Bear third. Pyro was wide throughout and failed to show any rally late, finishing tenth. 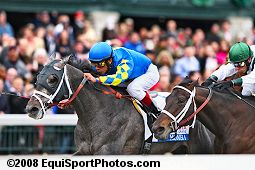 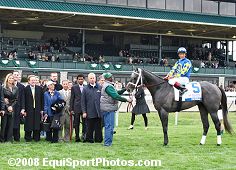 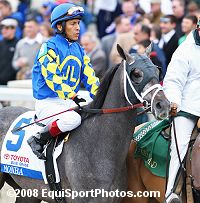 Left: Monba in the winner's circle. Winning trainer Todd Pletcher, who also trains runner-up Cowboy Cal, said, "I was hoping for a dead heat right at the end; they were both running so well. You hate to see one of them lose. It was nice to see them both show up and run the way they’re capable of."

Right: Monba in the post parade. Winning jockey Edgar Prado said, "It was beautiful. I was a very lucky passenger all the way and through the last sixteenth of a mile when the other horse (Cowboy Cal) was a little tough to get by." 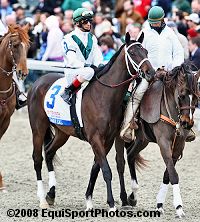 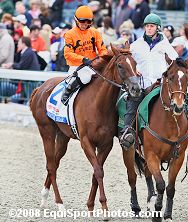 Left: Second place finisher Cowboy Cal in the post parade. His trainer Todd Pletcher said, "I felt bad for Cowboy Cal; he ran such a big race. I was really pleased, obviously. We were hoping for the earnings and now we’re in a position to think about the Kentucky Derby."

Right: Third place finisher Kentucky Bear in the post parade. Cassie Garcia, assistant to trainer Reade Baker said the following day, "He was bouncing off the walls this morning." Baker will ship Kentucky Bear to Churchill Downs to prepare for the Derby although the colt may not have enough graded earnings to make the field. 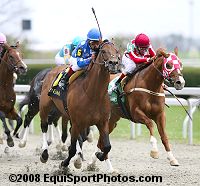 Immediately before the Blue Grass, a field of 10 older horses went to post in the $400,000 Commonwealth Stakes (G2), a 7 furlong sprint on the main track. Thousand Words, winner of an allowance last time out, was the lukewarm 3-1 favorite over 4-1 second choice Rebellion, unraced since finishing 8th in last year's Breeders' Cup Mile, with 9-2 Storm Military the third choice on the board exiting a fourth place finish in the Frank E. Kilroe Mile at Santa Anita.

38-1 longest shot Elite Squadron went to the lead immediately and set a quick pace of 23.05, 46.32, and 1:09.53 while being stalked by 20-1 Buffalo Man most of the way. Turning for home, Rebellion came out six wide and closed with a rush on the outside to get up by a head in 1:21.40. It was another 1 3/4 lengths back from Elite Squadron to 13-1 Medzendeekron third. Favorite Thousand Words raced back in ninth early and put in a mild rally late to finish fifth.
Results Chart from DRF. 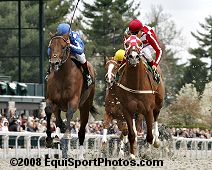 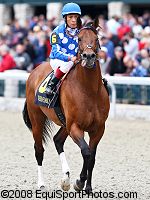 Left: Head on view of the finishe with Rebellion on the left and Elite Squadron on the right. Winning trainer Graham Motion said, "He didn't run badly in the Breeders' Cup. He had a rough trip. We wanted to run him about a month ago, but he held out and it was worth it. Thanks to him for being so patient. He's a pretty special horse."

Right: Rebellion in the post parade. Winning jockey Edgar Prado said, "The horse ran real well. Graham was very confident coming into the race. He said the horse has always been a trooper, and he proved that today." 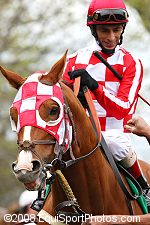 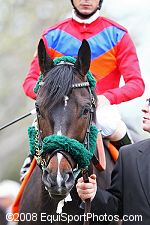 Left: Second place finisher Elite Squadron in the paddock. Under jockey John Velazquez, the James Baker trainee set the pace in the three path and held the lead into the final furlong but was just caught late, as the 38-1 longest shot on the board.

Right: Third place finisher Medzendeekron in the paddock. The Barry Abrams trainee was slowest out of the gate, came out four wide on the turn to pass tiring horses, and moved up to finish third late under jockey Eibar Coa. 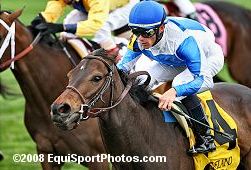 The first stakes race on Blue Grass day was the $200,000 Jenny Wiley Stakes (G2) for older fillies and mares going 1 1/16 miles on the turf. Precious Kitten, winner of the Matriarch at Hollywood Park in November, was sent off as the 5-2 favorite over 7-2 Bit of Whimsy, winner of the Mrs. Revere at Churchill Downs, with 4-1 Lady of Venice the third choice on the board, third behind Precious Kitten in the Matriarch last out.

39-1 longshot Candy Ball set a slow early pace of 25.24, 50.59, and 1:15.22 while being stalked the whole way by 6-1 Roshani down the backstretch. Roshani moved to to take over the lead in mid-stretch as Candy Ball tired. 6-1 Rutherienne, who raced back in ninth early, found room between horses with a furlong to go and got up late to win by a neck over 24-1 Stormy West, in 1:44.76 over the firm course. It was just a head back to Lady of Venice third, while favorite Precious Kitten, midpack all the way, came up empty in the stretch and finished fifth.
Results Chart from DRF. 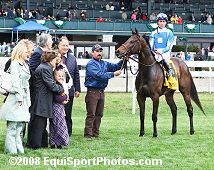 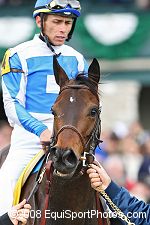 Left: Rutherienne in the winner's circle. Winning trainer Christophe Clement said, "She does train well but I was not expecting her to win. It was a very tough race on paper. I was expecting her to run well, but you don't expect horses to win when you're in that kind of company. But she's a very nice filly. That's what good horses do, they win."

Right: Rutherienne in the post parade. Winning jockey Garrett Gomez said, "As I split them, they kind of came together, and I was just hoping they'd give me just enough time to get me up there and they did." 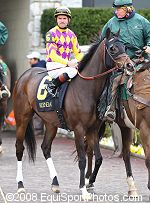 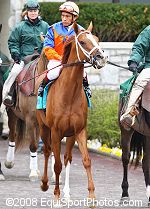 Left: Second place finisher Stormy West leaving the paddock. The Bill Mott trainee raced in fourth early out four wide the whole way under jockey Kent Desormeaux, then closed well down the center of the course, just missing the win by a neck.

Right: Third place finisher Lady of Venice heads out for the post parade. The Kiaran McLaughlin trainee sat near the back of the field most of the way under Edgar Prado, came out ten wide at the 1/4 pole, and passed tired horses in the stretch to get third place money. 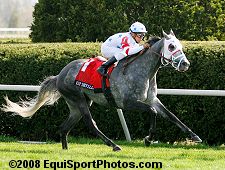 Friday, the day before the Blue Grass, a field of ten older horses entered the gate in the $300,000 Maker's Mark Mile (G1), facing a 1 mile trip over the turf course. Breeders' Cup Mile winner Kip Deville was sent off as the 2-1 favorite over 5-1 second choice Cosmonaut. 34-1 longest shot Thorn Song opened up a 1 1/2 length lead down the backstretch while setting easy fractions of 24.02, 48.30, and 1:12.90 over the turf rated good, with 9-1 Ruff and Ready stalking him down the backstretch. Turning for home, Kip Deville, who raced close up in fourth most of the way, moved out three wide and closed the gap, taking over the lead at the 3/16 pole. Under strong urging by jockey Cornelio Velasquez, he easily held off 8-1 Einstein by a length at the line, completing the trip in 1:36.78. It was another head back to pacesetter Thorn Song third.
Results Chart from DRF. 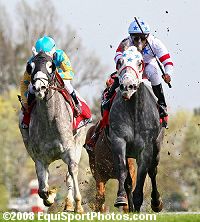 Head on view of the finish with Kip Deville on the right and third place finisher Thorn Song on the left. Winning trainer Richard Dutrow Jr. said, "We gave him a couple months off, just walking, kept him in the barn. But when we put the tack back on, every day has been a good day for Kip Deville. This was all by design. We targeted this race after the Breeders’ Cup and at times things don’t work out the way you plan it, but ‘Kip’ made sure it worked out this time. It’s going to be trouble to get me to run him back until the Woodbine Mile (in September)." 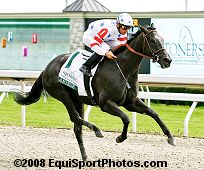 Thursday's feature at Keeneland is the $250,000 Stonerside Beaumont Stakes (G2) for 3-year-old fillies going 7 furlongs 184 feet on the Polytrack. Golden Doc A was sent off as the 5-2 favorite over 3-1 second choice Ariege. 7-2 Keep the Peace rounded out the top three on the board. 10-1 Passion went to the lead exiting the chute and set a pace of 23.70 and 47.26 down the backstretch while being stalked by Keep the Peace. Entering the stretch, Passion continued to hold the lead but Ariege, who saved ground on the turn, came out four wide for running room and closed with a rush to win by a length over late-running favorite Golden Doc A, completing the trip in 1:25.81. It was a long 2 1/2 lengths back to pacesetter Passion in third.
Results Chart from DRF. 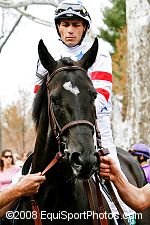 Ariege in the paddock. Winning jockey Garrett Gomez said, "I was enjoying where I was positioned but not exactly down on the inside. I tried to edge my way out a couple of times; I couldn’t really get out of there. I said I’ll just try to wait and try to explode out of there and move her back out towards the middle of the track. She was real responsive to what I needed her to do, and she came home really well for us." 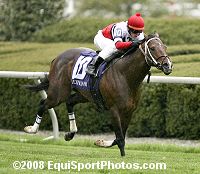 Closing out the stakes action this weekend was the $125,000 Shakertown Stakes (G3), a 5 1/2 furlong sprint on the turf course for older horses. Smart Enough was sent off as the even-money favorite in the field of eleven, making his first start since winning the Cherokee Run Handicap at Churchill Downs in November, over 9-2 second choice Emirates to Dubai, an allowance winner at Gulfstream last out and making his stakes debut. Fort Prado, third in the Turf Dash at Tampa Bay last out, was the 6-1 third choice.

22-1 longshot Mr. Nightlinger was quickest out of the gate and went to the lead immediately, setting a quick pace of 21.90 and 45.57 over the good turf while as many as 1 1/2 lengths ahead of 48-1 longest shot Midwatch who stalked him in second. Entering the stretch, Mr. Nightlinger continued to lead, with favorite Smart Enough, who ran into traffic trouble, finally making headway. However, Mr. Nightlinger found another gear and drew away late to win by 1 3/4 lengths in 1:03.84. It was a long 2 1/4 lengths back to Fort Prado third.
Results Chart from DRF.

Winning jockey Jamie Theriot said, "He’s an up-close pace kind of horse. That was our strategy to let him run to the front.  The fractions were kind of quick, but that was okay.  When (Midwatch) came up on him on the outside, he was determined not to let him get by." 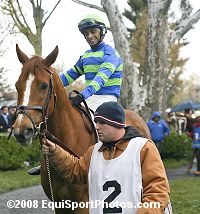 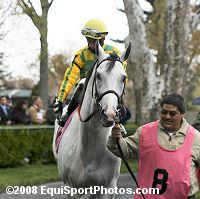 Left: Second place finisher Smart Enough in the paddock. Under jockey John Velazquez, the even-money favorite raced close to the pace while away from the rail, ran into traffic at the 3/8 pole and had to check, then found running room inside but had lost momentum and could only hold the place spot.

Right: Third place finisher Fort Prado in the paddock. The Chris Block trainee was slow out of the gate, moved out four wide for running room on the turn, and then in the drive, split horses in deep stretch to get third place money under jockey Rene Douglas.