Fair Grounds Race Course in New Orleans hosted its Louisiana Derby Preview Day card on Saturday, February 9, with six stakes races each of which is the local prep for a stakes event on Louisiana Derby Day, March 8. Racing conditions were ideal, with sunny skies and temperatures in the low 70's. The main event of the afternoon was the $300,000 Risen Star Stakes (G3) for 3-year-olds prepping for the Louisiana Derby and ultimately the Triple Crown. A field of eleven hopefuls went to the gate in this 1 1/16 mile event, with Pyro sent off as the 9-10 favorite, exiting two straight runner-up finishes in Grade 1 company, in the Champagne Stakes and then the Breeders' Cup Juvenile, both to champion War Pass. In to challenge him was undefeated stablemate Z Fortune at 3-1, also trained by Steve Asmussen, exiting the Lecomte over the same track. Visionaire was the 5-1 third choice off an allowance win, making his first stakes start.

112-1 longest shot Rich Young Ruler went to the front early and set a pace of 24.52, 49.50, and 1:14.62 while being stalked by 11-1 Signature Move and Visionaire. Shaun Bridgmohan aboard Pyro kept the favorite relaxed at the back of the field down the backstretch. Turning for home, Z Fortune, who had raced in fourth early, passed the tiring pacesetters and looked homefree in midstretch, opening up about a 2 length lead. However, his stablemate Pyro, who was stuck down on the rail at the top of the stretch, had to come out wide and charged down the center of the track, passing the whole field late to win going away by 2 lengths in a time of 1:44.68 over the fast track. It was just 3/4 length back from Z Fortune to Visionaire in third. 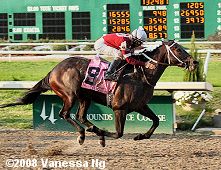 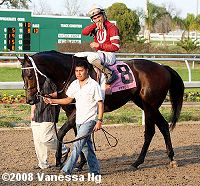 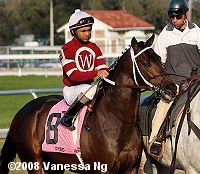 Left: Pyro circles after the race. Right: Pyro in the post parade. His trainer Steve Asmussen said, "He's a tremendous horse. How good is he? He’s good enough to do what we just watched. He accelerated home. Guess his workmate (Curlin) did the job, huh?"

His jockey Shaun Bridgmohan said, "I did what I was told to. It worked out very well. I was very patient. I was just looking for some daylight. When I got it, he gave it to me. I never hit him; I just tapped him on his shoulder." 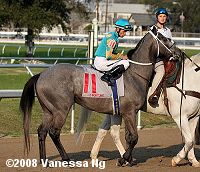 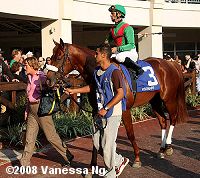 Left: Second place finisher Z Fortune in the post parade. His jockey Garrett Gomez said, "He is a nice horse. He is still learning, just like a teenager. He was half-way idling when he made the lead. I think the longer distances will definitely help this colt."

Right: Third place finisher Visionaire in the paddock. His jockey Jose Lezcano said, "I had to stay inside today. The pace was very slow, so we had to be a little bit closer."

The distaff counterpart to the Risen Star is the $200,000 Silverbulletday Stakes (G3) for 3-year-old fillies also at 1 1/16 miles. Undefeated champion Indian Blessing was the 7-10 favorite in the field of seven, coming off a win in the Santa Ynez at Santa Anita in her first start of 2008. Proud Spell, who finished second in the Breeders' Cup Juvenile Fillies, was the 2-1 second choice in her first start as a 3-year-old. 5-1 Jolie the Cat, coming off two straight wins including the Tiffany Lass, rounded out the top three on the board.

93-1 longest shot Miss Missile went to the front first time past the stands and around the clubhouse turn, getting the initial quarter in 23.87, but Indian Blessing was right behind her, easily taking over the lead midway down the backstretch after a half in 47.14. At the top of the stretch, jockey Garrett Gomez asked Indian Blessing for run and got it, as the champion gradually extended her lead to 2 lengths after 3/4 in 1:11.40, and then 4 lengths with a furlong remaining. Proud Spell, who raced in fourth early, rallied wide late and quickly closed the gap but was no match for Indian Blessing who cruised under the line 1 length clear in 1:43.75. It was another 1 1/4 lengths back to late-running 11-1 Highest Class in third. 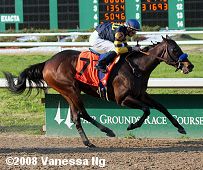 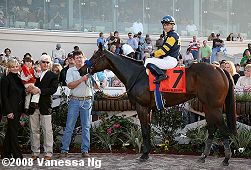 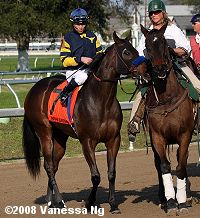 Right: Indian Blessing in the winner's circle with trainer Bob Baffert, his wife Jill, and son Bode. Baffert said, "She liked that dirt. It was exciting to see. She handled a lot today. She showed today she can get the distance. (Garrett Gomez) took hold of her early. I think she likes two turns better. We’ll see how she is after the race, and we may come back (for the Fair Grounds Oaks)."

Left: Indian Blessing in the post parade. Her jockey Garrett Gomez said, "She relaxed very nice coming off the Santa Ynez. She has to learn how to handle two turns. I think she can because she’s a smart filly. She got a little tired with the super-long stretch at the 1/16 pole." 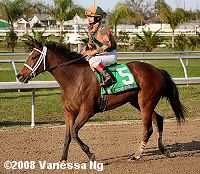 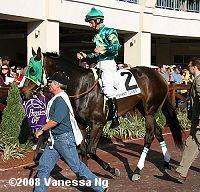 Left: Second place finisher Proud Spell returns after the race. Her trainer Larry Jones said, "First race back, it was a nice effort. You don’t want to knock them out. Our eye is on the big prize with the Kentucky Oaks and even the Fair Grounds Oaks. She got a little tired but it was a good effort. We’re happy. We were hoping not to hook Indian Blessing. Who would have thought from the West Coast she’d come here." Her jockey Gabriel Saez said, "Four months since Breeders' Cup, I think she ran a very good race. If she comes out of it OK, I think we’ll definitely be ready for the Oaks."

Right: Third place finisher Highest Class in the paddock. The Neil Howard trainee raced at the back of the field early, came out three wide entering the stretch and closed well to get third place money under jockey Robby Albarado. The daughter of Mineshaft improved her record to 2 wins, 0 seconds and 2 thirds in 7 career starts, earning $85,666 for owner Briarwood Stable.