On Louisiana Derby Preview Day at the Fair Grounds, a total of six stakes races were contested, two of which were over the turf. The $150,000 Fair Grounds Handicap (G3) featured a field of ten older horses going about 1 1/8 miles. California invader Daytona was sent off as the 2-1 favorite, coming off a three-race win streak including the Oak Tree Derby, Hollywood Derby, and the San Gabriel Handicap. In to challenge him was 3-1 second choice Better Talk Now, making his first start as a 9-year-old after finishing fourth in the Breeders' Cup Turf. Woodchopper Handicap and Commonwealth Turf Stakes winner Inca King was the 4-1 third choice.

When the gate opened, jockey Mike Smith sent favorite Daytona to the front right away and led around the clubhouse turn through an initial quarter of 23.97 over the firm turf course. Inca King stalked him in second. Down the backstretch, Daytona was allowed an uncontested lead, opening up by 2 lengths getting a half in a slow 48.55 and 3/4 in 1:12.41. Better Talk Now sat at the back of the field early. Turning for home, Inca King began to tire as Daytona widened his lead to 3 lengths in mid-stretch. 22-1 Jazz Quest, who had stalked the pace in fourth throughout, came three wide into the stretch and put in a late rally but was no match for Daytona who cruised past the winning post ahead by 2 1/2 lengths n 1:50.09. It just a nose back to late-running 7-1 Sterwins in third. Better Talk Now improved his position through the stretch but finished a disappointing sixth. 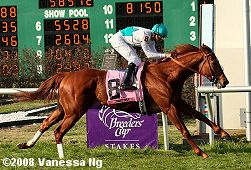 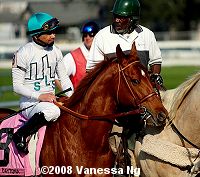 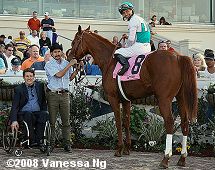 Right: Daytona in the winner's circle with trainer Dan Hendricks. Hendricks said, "He's a special horse. That’s one of the most relaxed races I've seen him run. Mike just sat and rode perfect. We learned a lot; he can change course, he can ship, and he can win again. We’ve got to decide whether to come back (to Fair Grounds for the Mervin Muniz Memorial on March 8), stay home (in California) or go to Dubai."

Left: Daytona in the post parade. His jockey Mike Smith said, "I was worried about the soft ground and long stretch. It is so different than California. But this horse has such good balance. Every step, he kept paying attention. He ran a big race." 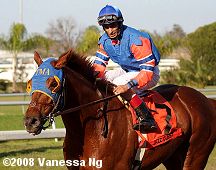 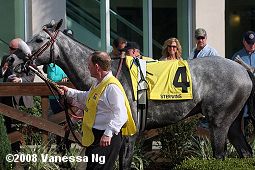 Left: Second place finisher Jazz Quest returns after the race. The Tom Amoss trainee settled in fourth off the rail early under jockey John Velazquez, came out three wide on the far turn, and closed willingly to nose out Sterwins for second money. He improved his record to 4 wins, 4 seconds, and 3 thirds in 16 starts earning $246,829 for owner Richard C. Colton Jr.

Right: Third place finisher Sterwins in the paddock. The Malcolm Pierce trainee raced in 8th early under jockey Patrick Husbands, split horses on the far turn, came out wide in the stretch and closed late to get third place money. The Canadian-bred improved his record to 5 wins, 4 seconds, and 3 thirds in 15 starts, earning $457,326 for owner-breeder Eugene Melnyk.


The $100,000 Colonel Power Stakes featured a field of eleven older horses sprinting about 5 1/2 furlongs on the turf. 2-1 favorite Euroears came into the race undefeated in four career starts including the Gaudin Memorial last time out. Fort Prado, who drew the outside post, was the 9-2 second choice off his third place finish in the Cherokee Run at Churchill in November.

12-1 Natural Speed battled on the pace with Euroears to his outside down the backstretch through a quarter in 22.31 and a half in 45.62. At the 1/8 pole, Euroears got his head in front and never looked back, easily holding off 6-1 Stormin Baghdad to win by a length in 1:03.22. It was another 1 1/2 lengths back to Natural Speed third. 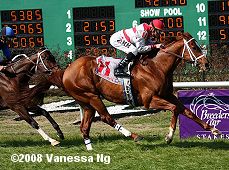 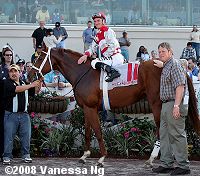 Euroears in the winner's circle. His trainer Bret Calhoun said, "The water has gotten deeper every time, and he has stepped up. He has tremendous ability, a big heart and a good mind." His jockey Ramsey Zimmerman said, "He takes deep breaths. It keeps him so relaxed. The way he breathes, you don't get that in all horses. Every time he took a deep breath, he had more confidence." 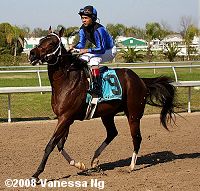 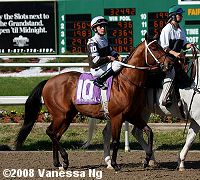 Left: Second place finisher Stormin Baghdad returns after the race. The Steve Asmussen trainee battled on the pace to the inside of Natural Speed, then came on late to pass the tiring pacesetter, but was no match for the winner. He improved his record to 6 wins, 5 seconds, and 1 third in 15 starts, earning $269,542 for owners Midnight Cry Stable.

Right: Third place finisher Natural Speed in the post parade. The son of Orientate led the field for the first 3 furlongs, got headed by stablemate Stormin Baghdad in the stretch, and weakened late. He improved his record to 4 wins, 5 seconds, and 2 thirds in 15 starts, earning $146,349 for owner-breeder Gainesway Thoroughbreds.