In addition to the two races for 3-year-olds on Louisiana Derby Preview Day, there were two other stakes races contested over the Fair Grounds main track. The $150,000 Mineshaft Handicap (G3) featured a field of just seven older horses going 1 1/16 miles on the main track. Super Derby and Travers Stakes runner-up Grasshopper was sent off as the 7-5 favorite in his first start as a 4-year-old. 2-1 second choice Magna Graduate had not won a race since the Excelsior at Aqueduct last April, and entered this race off a 6th place finish in the Clark in November. 3-1 Silver Lord rounded out the top three on the toteboard, winner of three straight including the Louisiana Handicap.


45-1 longest shot Stonehouse was loose on the lead early, getting fractions of 23.41, 47.15, and 1:12.23 with 37-1 Island Warrior stalking him the whole way. Silver Lord sat third and Grasshopper raced in fourth just off the pace. Entering the stretch, the front-running pair tired and dropped out of contention, as Silver Lord took over the lead with a furlong remaining. Grasshopper found an opening between Silver Lord and Magna Graduate at the 1/16 pole and won going away by 2 1/2 lengths in 1:46.45. It was just a head between Silver Lord and third place finisher Magna Graduate. 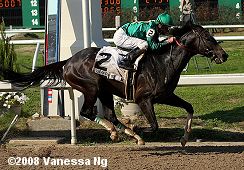 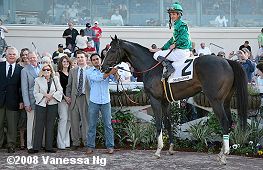 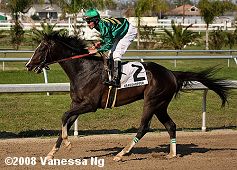 Left: Grasshopper in the winner's circle. His trainer Neil Howard said, "He's a real nice horse, but of course, that’s easy to say (after the race)."

Right: Grasshopper returns after the race. His jockey Robby Albarado said, "That was awesome. He has such a quick turn of foot. I was very patient; I knew it had to open up, and when it did, wow!" 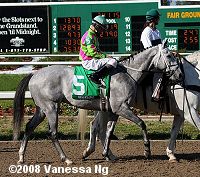 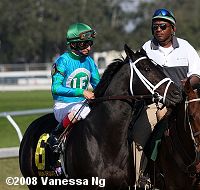 Left: Second place finisher Silver Lord in the post parade. His jockey Corey Lanerie said, "Everything was good. He rated very kind. He just got outrun by a very good horse."

Right: Third place finisher Magna Graduate in the post parade. The Todd Pletcher trainee settled three wide early under jockey John Velazquez, moved out four wide on the turn but could not sustain his bid, finishing third. He improved his record to 9 wins, 5 seconds, and 5 thirds in 28 starts, earning $2,359,205 for owner Elisabeth H. Alexander.


Kicking off the stakes action on Louisiana Derby Preview Day was the $100,000 Pan Zareta Stakes for older fillies and mares. A field of eight went to post in this 6 furlong main track sprint, with Tres Dream sent off as the 8-5 favorite off two straight wins including the Esplanade in December. 3-1 second choice Graeme Six was second in her last two starts, both in allowance company. 4-1 third choice Sutra won an allowance last time out after finishing seventh in the Beaumont at Keeneland.

Sutra and Graeme Six battled on the pace down the backstretch getting a quarter in 22.14 and a half in 45.55. Graeme Six took over the lead at the top of the stretch, then switched leads and pulled away under jockey Julien Leparoux to win by 2 1/2 lengths over Sutra in 1:09.o93. It was another length back to late-running favorite Tres Dream in third. 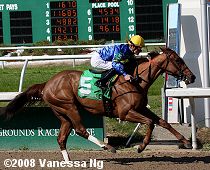 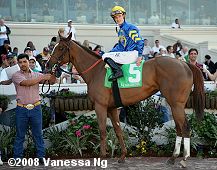 Graeme Six in the winner's circle. Her trainer Tom Amoss said, "Graeme Six is a very good horse, Grade 1 stakes-placed. We gave her some time off, and in her first start back (allowance race on Jan. 13), she was wide throughout. We were confident we could be competitive with this group. Having a race under our belt, she was sharper out of the gate, which was a positive and made for a better trip. I felt we made a good progression today. Position was the key to the race." Her jockey Julien Leparoux said, "I broke really well. That gave me a good chance to position her well. When I loosened, she ran on." 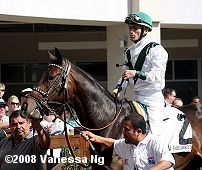 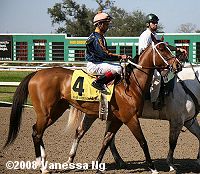 Left: Second place finisher Sutra in the paddock. The Michael Stidham trainee set the pace under jockey Garrett Gomez, got headed by Graeme Six but easily held second. She improved her record to 3 wins, 3 seconds, and 0 thirds in 8 starts, earning $339.600 for owners Stoneside Stable and Oak Crest Farm.

Right: Third place finisher and beaten favorite Tres Dream in the post parade. The favorite was slowest out of the gate, moved up on the far turn when asked by jockey Shaun Bridgmohan, but was no match for the first two, getting third place money beaten 3 1/2 lengths. The Steve Asmussen trainee improved her record to 5 wins, 2 seconds, and 2 thirds in 13 starts, earning $241,970 for owner Savorthetime Stables LP.