The $1 million Belmont Stakes (G1), the final leg of racing's Triple Crown which is contested at the marathon distance of 1 1/2 miles on the main track, is dubbed the "Test of the Champion." The slogan held true this year, as undefeated Big Brown was attempting to become the 12th Triple Crown champion and the first in 30 years. A crowd of 94,476 came out to a sun-drenched Belmont Park on Saturday hoping to witness history, as they endured high humidity temperatures in the 90's. As expected, Big Brown, winner of the Preakness, Kentucky Derby, and Florida Derby, was sent off as the 3-10 choice in the field of nine, reduced from the originally drawn ten when Japanese hope and Peter Pan Stakes winner Casino Drive was scratched the morning of the race. In to challenge the Richard Dutrow stable star were 7-1 second choice Denis of Cork, third in the Kentucky Derby last time out, and 14-1 third choice Tale of Ekati, winner of the Wood Memorial before finishing fourth in the Kentucky Derby.

When the gate opened, Big Brown broke awkwardly from the rail post and moved to the outside, while 38-1 longest shot Da' Tara, breaking from the 6, was hustled to the lead right away by jockey Alan Garcia and angled over to the rail to save ground. Da' Tara set an easy pace of 23.82, 48.30, 1:12.90, and 1:37.96 over the fast main track while as many as 3 lengths ahead of Tale of Ekati who stalked him in second. Big Brown sat third just to the outside of Tale of Ekati. On the far turn, Denis of Cork, who was unhurried back in 6th early, moved to to challenge for the lead, while at the same time, jockey Kent Desormeaux tapped Big Brown with his left-handed whip asking for the favorite to make his move. However, Big Brown did not respond, dropping back to 8th as Da' Tara continued to lead, opening up a 5 length lead at the 1/4 pole after 10 furlongs in 2:03.21. Desormeaux eased Big Brown through the stretch, officially not finishing the distance, as Da' Tara easily pulled away from Denis of Cork late to win by 5 1/4 lengths in 2:29.65. 34-1 Anak Nakal, who had raced in midpack fourth early, and 29-1 Ready's Echo, who rallied from eighth, dead-heated for third, 2 3/4 lengths behind Denis of Cork. 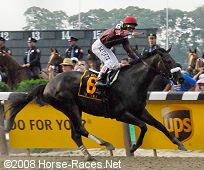 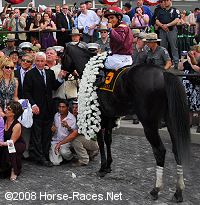 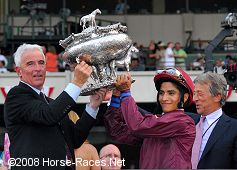 Left: Da' Tara in the winner's circle with trainer Nick Zito holding him and owner Robert LaPenta just behind him. Zito said, "Well, at the half-mile pole, it looked like Kent kept asking him, and he wasn't getting close to Alan. And when he wasn't getting close to Alan, I was getting very happy, because I didn't think those other horses were getting close to Alan, either. So for me, at one point, I said, well, Big Brown is going to make his move, but Da'Tara is running the race of his life today, and with the distance all in his favor, I think it's going to work out. But you can tell at the half-mile pole, Big Brown wasn't himself."

Right: Trainer Nick Zito and jockey Alan Garcia hold up the Belmont Stakes trophy with owner Robert LaPenta behind them to the right. 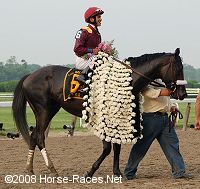 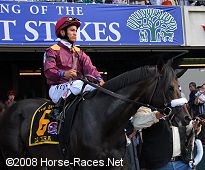 Left: Da' Tara circles with his Belmont Stakes flower blanket. Winning owner Robert ` LaPenta said, "He looked like (stablemate) War Pass. When he sprung around that turn, he actually opened up. It was really unbelievable. I've been coming to this race my whole life. You know, I was here with when Secretariat won. Today I thought could have been another one of those days. New Yorker, great place, great venue and it's just a miracle day."

Right: Da' Tara heads out to the track for the post parade. Winning jockey Alan Garcia said, "On the back side, he was comfortable and he was playing with his ears and I was so happy by the 5/8 pole, I was looking and thinking I have a shot and when I move my horse to the 1/2 mile pole, he takes off and I said, "Oh, my God, Da' Tara, you can do it." 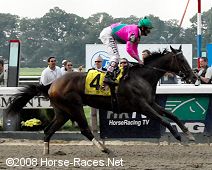 Second place finisher Denis of Cork runs out after the race. His trainer David Carroll said, "We are very proud of our horse. We didn't have any help on the front end. He had to make up all that ground ourselves. Robby was very patient on him and we are looking forward to having a great second half of the year with him."

His jockey Robby Albarado said, "He ran awesome and this was a great trip. When I called on him I got by the rest of them real easy. When I went by Big Brown, it gave me a rush. When you ride him you have to wait on him, but when he moves he'll take you there." 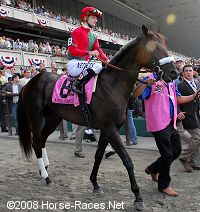 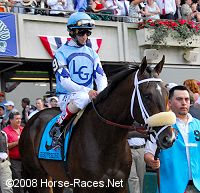 Left: Third place finisher (dead heat) Anak Nakal heads out to the track before the race. Trainer Nick Zito, who also trains the winner, said, "My percentage isn't great; I think it's 2 for 18 now. But we've been second six times in this race, and third a whole bunch of times, too, and fourth. So we have a good history with the race. Obviously we like these classic races. It's New York; it's our home; it's a mile and a half; it's one of the great races of all time."

Right: Third place finisher (dead heat) Ready's Echo before the race. Ready's Echo raced near the back of the field for the first mile under regular rider John Velazquez, saved ground on the far turn and improved position through the stretch to finish in a dead heat for third. The Todd Pletcher trainee improved his record to 1 win, 2 seconds, and 2 thirds in 5 starts, earning $152,200 for owner Let's Go Stable. 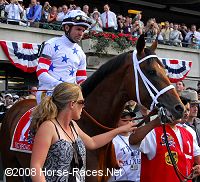 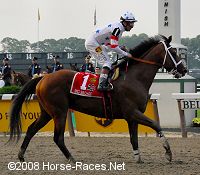 Left: Heavy favorite Big Brown before the race. His trainer Richard Dutrow Jr. said, "It certainly seems that Kent did the right thing in pulling him up. When they turned for home, something wasn't right. I don't really know how I feel. We did really good with him. It was a very disappointing race, but the horse looks like he's fine. He didn't get the Triple Crown, but we got the Derby and the Preakness and that was great. Something has to not be right for him to pulled up, so I have to try to find out what it is. I'm sure it's not the horse's fault, so there's nothing to be down on him."

Right: Big Brown being eased past the finish line. He was fighting jockey Kent Desormeaux the entire way down the stretch, but showed no signs of being lame. Desormeaux said, "He was keen to go on early. He broke so hard. I got him out early and just cantered down the backside. A couple of times, he thought it was time to go and jumped into the bridle a couple of times. But I had no horse, and when I realized something was wrong, I knew he wouldn't be fifth. He's the best horse I've ever been on, so I took care of him." 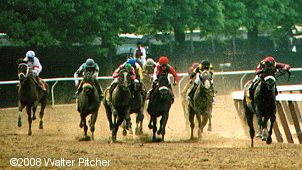 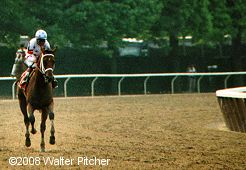 Left: Big Brown on the far outside starting to pull up while Da' Tara on the inside starts to pull away after rounding the final turn. Veterinarian Dr. Larry Bramlage said, "If the quarter crack played any role, he would have shown some tenderness, although I guess it could be minor enough, he's a smart horse, might have decided it wasn't his day and he was not going to try. And you could say the same thing about the heat but I think we have to wait for his veterinary examination. The two minutes that he was on the track coming back, he looked fine, and there was not anything outwardly apparent."

Right: Big Brown is left behind by the rest of the field as he is eased by Kent Desormeaux.