Of the three Triple Crown races, the undercard of the Belmont Stakes has the most prestigious races on its undercard. This year, the 94,476 on hand were treated to 5 graded stakes which preceded the main event. Three were Grade 1 events, including both turf races.

Immediately before the Belmont Stakes, a field of 12 older horses went to post in the $400,000 Woodford Reserve Manhattan Handicap (G1), a 1 1/4 mile trip over the inner turf course. Out of Control, second in the Woodford Reserve Turf Classic at Churchill Downs, was sent off as the lukewarm 3-1 favorite. Mervin Muniz Jr. Handicap winner Proudinsky was the 4-1 second choice over 9-2 Dancing Forever, winner of the Elkhorn last time out.

As expected, Shake The Bank, coupled in the wagering with Better Talk Now at 8-1, was rushed to the front to set an honest pace for his stablemate. He was allowed an uncontested lead of as many as 4 lengths while setting fractions of 24.11, 47.94, 1:11.43, and 1:35.38 over the firm course. 14-1 Stalingrad stalked him in second while favorite Out of Control sat in sixth down the backstretch. Shake the Bank stubbornly held the lead to the 1/8 pole but tired soon after. Dancing Forever, who raced back in 10th early, favorite Out of Control, and 11-1 shot Pays to dream, ninth early, all rallied strongly to pass tiring horses. Dancing Forever on the inside prevailed by a nose over Out of Control, who was just a half length ahead of Pays to Dream in a blanket finish. 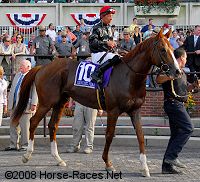 Left: Dancing Forever in the winner's circle. Winning trainer Shug McGaughey said, "He's one of those horses that just came around. He's a great big horse. Everything is getting better for him. I thought he would have a big chance. When he ran second to Einstein at Gulfstream at equal weights at 37-1, that showed me something. He'll either go in the Man o'War or the Sword Dancer." 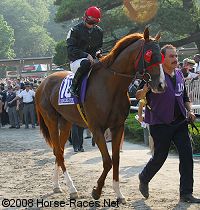 Dancing Forever heads out of the paddock for the track. Winning jockey Rene Douglas said, "I got along with this horse. I guess it's a good match. I know he's been getting better in each of his races. I was a little bit scared of being outside. Coming into the first turn I didn't want to be racing wide. So, I immediately went to the rail and took my time with him. Turning for home, we saw an open spot and he took off." 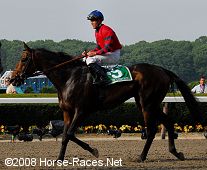 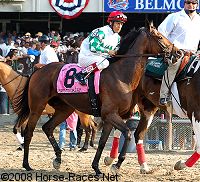 Left: Second place finisher and beaten favorite Out of Control returns after the race. His jockey Garrett Gomez said, "It's a shame he got beat. He ran a really good race, and he is a tough beat. I'm glad to see him rebound (from his loss to Einstein in the Turf Classic) and run a really good race."

Right: Third place finisher Pays to Dream in the post parade. The 11-1 shot was well off the pace for the first 7 furlongs under new jockey Edgar Prado, came out 7 wide for the drive, and closed with a rush, just missing the win. The David Donk trainee improved his record to 5 wins, 1 second, and 4 thirds in 15 starts, earning $377,741 for owner-breeder December Hill Farm.


The $400,000 Just A Game Stakes (G1) featured a field of 10 older fillies and mares going 1 mile on the Widener turf course. Lady of Venice, second in the Jenny Wiley at Keeneland in April last time out, was sent off as the 2-1 favorite over 5-2 Vacare, unraced since winning the First Lady at Keeneland in October. 5-1 Criminologist, winner of the Beaugay at Aqueduct, rounded out the top three on the toteboard.

9-1 Bayou's Lassie was allowed an uncontested lead of as many as 2 lengths while setting a pace of 23.52, 46.55, and 1:09.68 over the firm going, while 21-1 Sharp Susan stalked her in second. Entering the stretch, 10-1 Ventura, who sat in midpack fourth down the backstretch, moved up along the hedge to challenge for the lead as the pacesetters tired. Ventura took over the lead with a furlong remaining, and was all out to hold off the late closing favorite Lady of Venice in the final strides to prevail by 3/4 length in 1:32.75. It was another 3/4 length back to 44-1 longest shot Forever Together third. 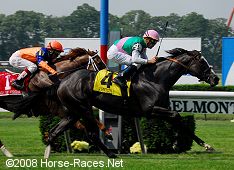 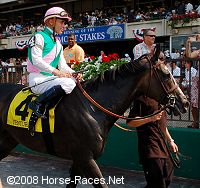 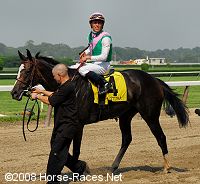 Left: Ventura takes her walk down Victory Lane to the winner's circle. Winning trainer Bobby Frankel said, "I thought the one-turn mile would help her. I think the way the course was soft the last time, they stayed in the same spot all the way around. Next? Maybe the Cash Call (Mile, at Hollywood)"

Right: Ventura circles after the race. Winning jockey Garrett Gomez said, "The other day (May 3 at Churchill Downs) it was like a marsh. Today, she was in a good spot and when I pointed her, she came home really good." 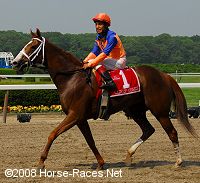 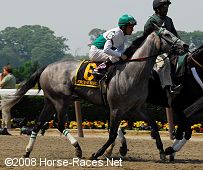 Left: Second place finisher and beaten favorite Lady of Venice returns after the race. Her trainer Kiaran McLaughlin said, "She ran very well. You like them on the turf, but you have to work out a good trip. A nice filly won it. Lady of Venice is a Grade 1 filly; we just have to get lucky and win it. Next, she will go in either the Cash Call (at Hollywood) or the Diana (at Saratoga)."

Right: Third place finisher Forever Together in the post parade. The 44-1 longest shot raced at the back of the field for the first 3/4 mile under new jockey Ramon Dominguez, then had to check on the turn to avoid traffic, but rallied strongly through the final 3/16 mile to get up for third. The Jonathan Sheppard trainee improved her record to 4 wins, 1 second, and 2 thirds in 10 starts, earning $275,300 for owner Augustin Stables.