Along with the Belmont Stakes, there were three other graded stakes events contested on the expansive main track at Belmont Park on Saturday afternoon before a crowd of 94,476. The most prestigious of these is the $250,000 Acorn Stakes (G1) for 3-year-old fillies, which kicks off New York's Triple Tiara series, comprising the Acorn, Mother Goose, and Coaching Club American Oaks. Only 4 of the originally drawn field of 5 went to post in this one mile event around one turn, with last year's juvenile champion Indian Blessing sent off as the 7-10 choice off her runner-up finish in the Fair Grounds Oaks to Proud Spell. Nassau County Stakes winner Zaftig was the 3-1 second choice over 4-1 Game Face, winner of the La Troienne at Churchill Downs. 5-1 Golden Doc A, fourth in the Kentucky Oaks last time out, completed the field.

Indian Blessing went to the front right away and set a pace of 22.85, 45.34, and 1:09.68 while being stalked by Zaftig just to her outside and a length behind. Turning for home, Zaftig moved up on the favorite and the pair hooked up at the 1/8 pole. Jockey John Velazquez on Zoftig lost his whip but it didn't matter, as she pulled away to win by 4 1/2 lengths in 1:34.50 over the fast track. It was a long 17 1/4 lengths back to Game Face third, who in turn was 13 3/4 lengths ahead of Golden Doc A last. 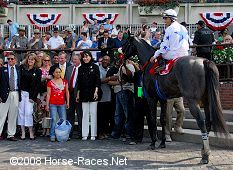 Zaftig in the winner's circle. Winning trainer Jimmy Jerkens said, "Every time the filly tried to sprint away from her, we were right on her again. She set fractions, but we weren't far behind. I thought it might be telling on us, too. I think she can go farther. There are a lot of great races for three-year-old fillies out there." 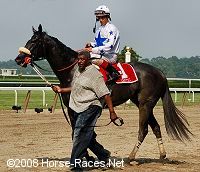 Zaftig circles after the race. Winning jockey John Velazquez said, "She stumbled a bit coming out of the gate. I wanted to be close. She took me to a nice place where I wanted to be and we put pressure on Indian Blessing. I was pretty confident. I shook my hands and showed her the way. She did it pretty easily." 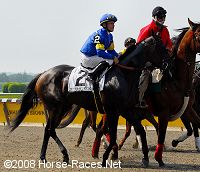 Second place finisher and beaten favorite Indian Blessing in the post parade. Her trainer Bob Baffert said, "She's just so fast. She got beat by a nice filly. You hate to lose, but she ran her race. I thought I had her relaxed enough, so she would kick on. But she won't do that. She's like 'Point me in the right direction and I'll give it to you.' You can't be mad at her for what she's done. We're disappointed, but we're not disgusted."

Her jockey Garrett Gomez said, "It's been a while since she ran. She relaxed well, but no one was going to give her a break. I thought she was fast enough to shake loose. But Johnny would not let me get away." 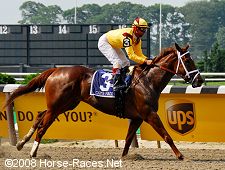 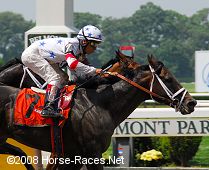 Kicking off the stakes action on Belmont Stakes day was the $250,000 True North Handicap (G2) for older horses sprinting 6 furlongs. Benny the Bull was sent off as the 1-2 favorite off a 3 race winning streak including the DeFrancis Dash, Sunshine Millions Sprint, and the Dubai Golden Shaheen last time out. Abraaj was the 5-1 second choice, exiting an allowance win last time out, over 6-1 third choice Thor's Echo, 6th in the Golden Shaheen.

10-1 Man of Danger set a fast early pace of 22.06 and 44.98 while being stalked by 34-1 longest shot Saint Daimon and Thor's Echo. Entering the stretch, Saint Daimon tired and faded to finish last, as Man of Danger opened up a 1 1/2 length lead after 5 furlongs on 56.61. However, Benny the Bull, fifth early, came out 6 wide into the lane for his rally and closed strongly to catch Man of Danger at the line by a neck in 1:09.06. It was just a neck back to Abraaj in a blanket finish.
Full results chart 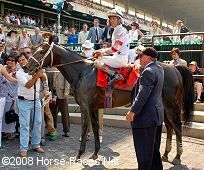 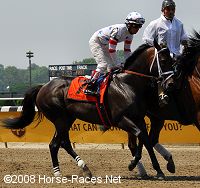 Left: Benny the Bull in the winner's circle. His trainer Richard Dutrow Jr. said, "I wasn't concerned about him coming into this race off his Dubai win because he had been training so well. I was more concerned with him at the 1/8 pole, that he wouldn't win. We let him run his own race, and he got up there just in time. Obviously, he's better than he was last year. He has been coming around the right way at the right time. We'll have to see how he comes out of this race to see what's ahead." 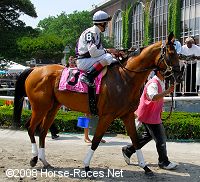 Second place finisher Man of Danger heads out of the paddock before the race. Man of Danger set the pace under jockey John Velazquez and looked homefree at the 1/8 pole, but was caught in the final strides. The Bruce Levine trainee improved his record to 9 wins, 6 seconds, and 2 thirds in 27 starts, earning $390,395 for owner Stephen Atkins. 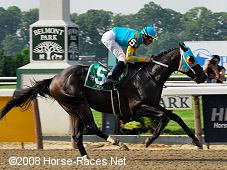 The $250,000 Woody Stephens Stakes (G2) featured 3-year-olds sprinting 7 furlongs. J Be K, second in the Withers after winning the Bay Shore, was sent off as the lukewarm 5-2 choice in the field of nine. Majestic Warrior, fourth in the Derby Trial last out, was the 5-1 second choice over 6-1 Fatal Bullet, shipping in to Belmont off a 3-race win streak at Woodbine.

Favorite J Be K battled for the lead with 24-1 True Quality through fractions of 22.29, 44.89, and 1:08.78. Entering the stretch, J Be K found another gear and powered away from the competition, opening up a 3 1/2 length advantage over True Quality at the 1/8 pole. 10-1 Silver Edition rallied from fifth but was no match for J Be K who cruised under the line 5 1/2 lengths in front, completing the trip in 1:21.85. Silver Edition nosed out True Quality for second money.
Full results chart 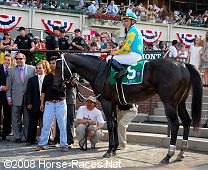 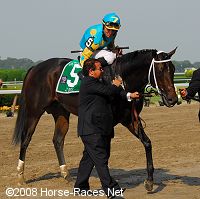 Left: J Be K in the winner's circle. Winning owner Ahmed Zayat (gray suit on the left) said, "We have always thought so highly of him, especially when he broke the track record at Saratoga last year. He is a phenomenal sprinter and showed it here. He's getting better and maturing each time. Steve (Asmussen, trainer) has done a phenomenal job and (original trainer) Bob Baffert did a great job giving this horse his foundation. If he continues to stay healthy, he'll be back at Saratoga for the King's Bishop."

Right: J Be K circles after the race. His jockey Garrett Gomez said, "He is a speed-tactical horse. He doesn't need the lead. He was sharp and allowed me to do what I needed to do. He has grown so much between his last race and this one. He keeps getting stronger. I was happy with the way he ran today." 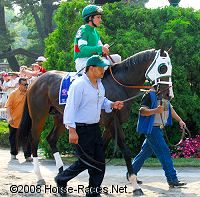 Second place finisher Silver Edition heads out of the paddock before the race. Silver Edition settled in midpack fifth under jockey Ramon Dominguez, saved ground on the turn, and closed late along the rail to get second money in a photo finish. The D. Wayne Lukas trainee improved his record to 2 wins, 4 seconds, and 1 third in 12 starts, earning $202,429 for owner Thomas Van Meter.