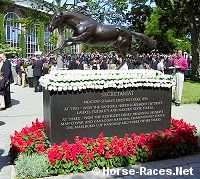 A field of ten has been entered for the 140th running of the Belmont Stakes on Saturday June 7 where Kentucky Derby and Preakness winner Big Brown will attempt to become the only 12th horse to win the coveted Triple Crown. He drew the #1 post and is listed as the 2-5 morning line favorite, although he will likely go off lower than that just from all the souvenir $2 win tickets fans will buy on him. Casino Drive is the second choice at 7-2 and will break from the #5 post, while Denis of Cork from post #4 is next at 12-1. It has been 30 years since Affirmed became the 11th Triple Crown winner, but many think Big Brown has the talent to break the long drought.

Although Big Brown has had a much publicized foot problem over the last week and a half and will be racing with a patched quarter-crack in his left front hoof, his trainer Richard Dutrow Jr. still seems quite confident in his charge. This morning Dutrow said, "We were kind of hoping for the outside but I just can’t see a post getting this horse beat. We'll take it and go with it. I can't imagine anything could be any better with the horse. He was awful rough this morning around the barn just walking. I've never seen him like that. So he knows something's coming; he knows it's soon; I just couldn't be happier with the horse."

Update: As of Saturday morning, Casino Drive has been scratched due to a stone bruise on his right hind foot. Nobutaka Tada, spokesman for the owner and trainer, said, "This morning, he was feeling well, so we took him to the track for a canter. He came back well to the stable, but later he started favoring his left hind again. It's not serious, just a small stone bruise, and he will be fine. But the timing is terrible."

Post time for the Belmont Stakes will be 6:25pm Eastern and it will be race 11 of 13 on the card. ESPN will televise the undercard from noon to 5pm with ABC taking over from 5pm to 7pm.

Below are the horses entered for the 2008 Belmont with post positions and morning line odds. Be sure to click the link on each horse's name to view full info, stats, and a photo.