Belmont Stakes weekend kicked off on Friday with two graded stakes races. Just 6,182 were on hand at Belmont Park in New York on a sunny, cool afternoon with temperatures in the low 70's. The first stakes event of the afternoon was the $200,000 Brooklyn Handicap (G2), a 1 1/2 mile trip on the main track for older horses. Nite Light was sent off as the 8-5 favorite in the field of six, exiting a second place finish in the Excelsior at Aqueduct. In to challenge the Todd Pletcher trainee was 2-1 second choice Delosvientos, winner of the Fit to Fight Handicap at Belmont over the same distance, and 3-1 third choice Sightseeing, third in the Westchester last out and winless since the Peter Pan last May.

After stumbling at the start, Delosvientos was rushed up to the front by jockey Eibar Coa, and he was allowed an uncontested lead of as many as 2 lengths while setting slow fractions of 24.22, 48.11, 1:12.74, 1:37.65, and 2:03.91. Nite Light and 8-1 Angliana sat back second and third down the backstretch. Entering the stretch, 10-year-old fan favorite and 9-1 shot Evening Attire, who had raced at the back of the field early, came out five wide to pass tiring horses. However, Delosvientos found another gear, taking full advantage of the slow pace, and opened up a 5 length lead with a furlong to go. Evening Attire continued to close the gap but was no match for Delosvientos, who cruised under the line 2 lengths in front, completing the 12 furlong trip in 2:30.96. It was another 5 1/4 lengths back to Angliana third. Favorite Nite Light was four wide the whole way and tired late to finish fifth beaten 11 1/2 lengths. 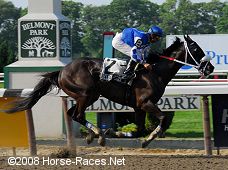 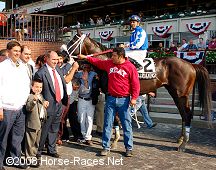 Delosvientos in the winner's circle. Giuseppe Iadisernia Jr., assistant to his father winning owner-trainer Giuseppe Sr., said, "He's been great, ever since he won his maiden. It was probably a mistake to put him on the turf. We dropped him into the claimer, I think, to get his confidence back. He runs his race every time. Once he's in front, he's fine." 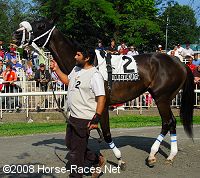 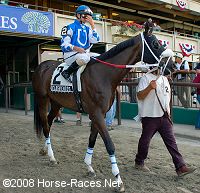 Left: Delosviento in the paddock before the race.

Right: Delosvientos heads out for the post parade. Winning jockey Eibar Coa said, "I kind of had to push him a little bit going to the first turn. He finished really well." 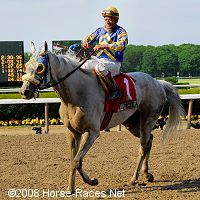 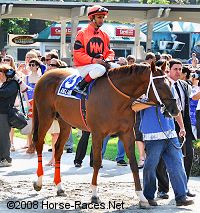 Left: Second place finisher Evening Attire returns after the race. His trainer Pat Kelly said, "There were a lot better fractions today. In the barn today, he had his game face on early. I'm always happy when he's in the money. It was fun to try."

Right: Third place finisher Angliana in the paddock before the race. Angliana was bumped at the start then raced close to the pace saving ground around both turns under new jockey Rajiv Maragh, lodged a mild bid at the top of the stretch but gradually tired late, holding third beaten 7 1/4 lengths. The Gary Contessa trainee improved his record to 5 wins, 8 seconds, and 6 thirds in 26 starts, earning $362,412 for owner Winning Move Stable.

The last race on Friday was the $100,000 Hill Prince Stakes (G3), a 1 mile turf event for 3-year-olds. Godolphin Racing entrant Hatta Fort was sent off as the 2-1 favorite after finishing second by a nose in the Lafayette Stakes at Keeneland in April. In to challenge him were 9-4 second choice Gio Ponti, unraced since finishing 8th in the Breeders' Cup Juvenile Turf, and 3-1 third choice Prussian, second by a nose in the Lamplighter at Monmouth last time out.

As expected, Prussian was sent to the front by regular rider Kent Desormeaux, and set fractions of 23.71, 47.24, and 1:11.14 over the firm course while 6-1 fourth choice Moral Compass stalked him in second. Prussian held a one-length advantage over Moral Compass to the 1/8 pole, but Gio Ponti, who raced at the back of the field early, came out 5 wide on the turn and closed with a rush down the center of the course. Gio Ponti passed the frontrunners at the 1/16 pole and drew away to win by 2 lengths over Prussian in 1:35.03. It was another length back to Moral Compass third, and another 1 3/4 lengths more to favorite Hatta Fort, who broke slowly, raced in fourth down the backstretch, but could not improve position late. 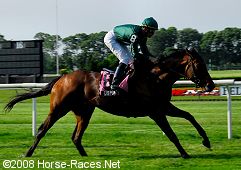 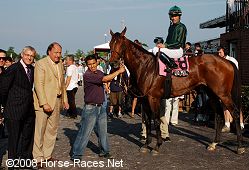 Gio Ponti in the winner's circle. Winning trainer Christophe Clement said, "He's a very good horse. We didn't know if he would train on from 2 to 3, but obviously, with this performance, he did. At Monmouth (in the Breeders' Cup Juvenile Turf) he had no racing luck." 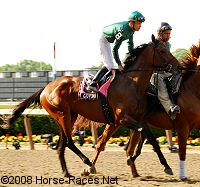 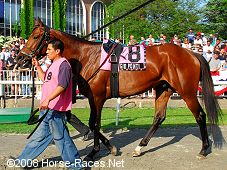 Right: Gio Ponti in the paddock before the race. Winning jockey Garrett Gomez said, "The only thing I was concerned about was swinging wide. I didn't want to leave him too much to do coming off a long layoff. He's a very athletic individual. The further the better for him. He's a nice horse." 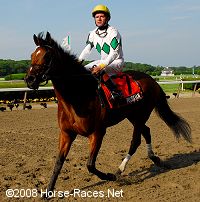 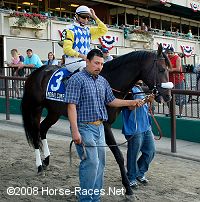 Left: Second place finisher Prussian returns after the race. Prussian led the field for seven furlongs under Kent Desormeaux but was unable to hold off the winner in the final furlong. The Bill Mott trainee improved his record to 2 wins, 2 seconds, and 0 thirds in 6 starts, earning $226,060 for owner-breeder Monticule Farm.