The $750,000 Wood Memorial (G1) is New York's major prep race for the Kentucky Derby and the Triple Crown. A field of nine 3-year-olds went to the gate in this 1 1/8 mile feature, one complete circuit of the Aqueduct main track. Just 7,698 paying fans were on hand, enjoying sunny skies and temperatures in the high 50's which dried the track to fast for the stakes races after steady rain the day before. Juvenile champion War Pass was sent off as the 9-10 favorite, despite his inexplicable last-place finish in the Tampa Bay Derby last time out, and an incident on the flight from Florida where he was injured. The two-horse entry of Court Vision and Inner Light was the 5-2 second choice, with Inner Light entered as a "rabbit" for Iroquois and Remsen winner Court Vision, third in the Fountain of Youth last out. 9-2 Texas Wildcatter, second by a nose in the Gotham, rounded out the top three on the toteboard.

As expected War Pass went straight to the lead and was pressured to his outside by Inner Light. War Pass held off Inner Light by 1/2 a length for the first half mile, getting fractions of 22.46 and 46.47. 8-1 fourth choice Tale of Ekati sat in stalking position third down the backstretch. With 3 furlongs remaining, Inner Light tired and dropped out of contention, as War Pass opened up a 2 1/2 length lead on Tale of Ekati, getting 3/4 in 1:11.50. Early in the stretch run, it looked like War Pass would cruise to an easy victory, but at the 3/16 pole Tale of Ekati moved up along the rail. The pair battled through the final furlong, but Tale of Ekati dug in to prevail by 1/2 a length at the line in a time of 1:52.35 over the track rated "fast" but still slightly wet from Friday's rain. It was another 1 1/4 lengths back to late-running Court Vision who put in a strong rally from 8th early. 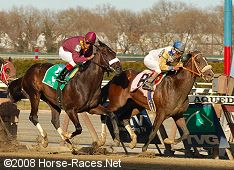 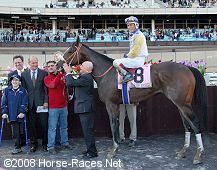 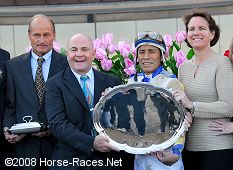 Left: Tale of Ekati in the winner's circle with owner Charles Fipke at his head. His owner and breeder Charles Fipke said, "I'm still in a daze. This is wonderful; of course, he had to beat a great horse, War Pass. This is our prep race for the Derby, that's where we're going next if this didn't take too much out of him. Winning this race is like finding that first diamond, that kind of excitement. He's named for our diamond mine in Ekati, up in the Northwest Territories (Canada) about 200 miles north of Yellowknife. I'd really like to come back to New York and win the Belmont Stakes, that would be my biggest ambition."

Right: Trophy presentation for the Wood Memorial with trainer Barclay Tagg, owner Charles Fipke, and jockey Edgar Prado. Tagg, who also trained 2007 Wood winner Nobiz Like Shobiz, said, "We always though he was a good horse. Last time, we took him to the Louisiana Derby. He got a little tangled up in the gate there and ran a disappointing race. We still felt good about him, and we worked out some of those issues in the gate. He showed up today big time. I thought War Pass was the horse to beat. It was nice to see Inner Light go after War Pass. We were laying a little closer than I wanted him to be, but Edgar has an intuitiveness that has served him pretty well for the last 30 years. I have a group of horses in Lexington and he'll ship down there tomorrow morning. Big Brown and War Pass are both in the Derby; that might work out well for us." 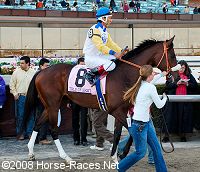 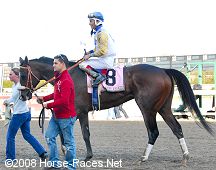 Left: Tale of Ekati heads out for the post parade before the race.

Right: Tale of Ekati and jockey Edgar Prado circle after winning the race. His jockey Edgar Prado: "He didn't break that well (in the Louisiana Derby). Today, he broke sharp and he made my job easier. I had a beautiful trip and I knew War Pass was going very fast. I was very proud of him. He kept on trying all the way. As far as the Kentucky Derby, we'll see how he cools out and comes out and go from there." 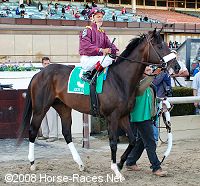 Second place finisher and beaten favorite War Pass heads out for the post parade. His trainer Nick Zito said, "It's sad that we didn't win because he is a champion. It would have been wonderful to win the Wood Memorial. I'm still glad with the way he ran; he wasn't up the track. There were no excuses. I told Cornelio to drift off the fence because the rail was dead all day. It was a tiring track. I wanted him to change leads so it would be easier for him. We'll take him to Kentucky. We'll take it one day at a time. We still have to salute the winner, he ran a big race. If War Pass has a good month, we'll see if we can make it to the Derby."

His jockey Cornelio Velasquez said, "He ran big. (Inner Light) had no chance in the race. They knew my horse was going to the lead, and they didn't let him get a break. The first quarter was way too fast for him, but he still ran great." 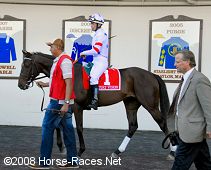 Third place finisher Court Vision in the paddock with trainer Bill Mott on the right. His trainer Bill Mott said, "The jockey said he was slipping a bit on the track. He dropped himself a pretty far way back and made a decent run to get third. Maybe he has lost a bit of confidence. I would think we would go on to Kentucky and evaluate from there."

His jockey Garrett Gomez said, "I was hoping that with the position he was in, he would get it done. It didn't look like he was getting across the racetrack all that great. I was in a drive on him for a long time and he was never up in the bridle. I know he ran on this track last fall, but it wasn't as drying out as it was today." 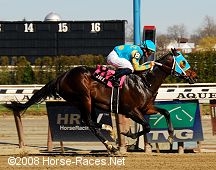 Kicking off the stakes action on Wood Memorial day was the $150,000 Bay Shore Stakes (G3), also restricted to 3-year-olds but sprinting 7 furlongs. J Be K, who was 8th in the Louisiana Derby after winning his first two career starts, was sent off as the 3-2 favorite in the field of seven, over 7-2 second choice Gattopardo, shipping in from Laurel Park where he won the Miracle Wood last time out. Jockey Ridge, making his stakes debut after finishing second in an allowance at Gulfstream last out, was the 9-2 third choice on the board.

8-1 Go Go Shoot battled for the lead with favorite J Be K exiting the chute and into the backstretch, with Go Go Shoot getting the initial quarter in 22.38. J Be K poked his head in front at the 3/8 pole, getting the half in 45.21, as Go Go Shoot tired and dropped from contention. J Be K opened up a 7 length lead in mid-stretch, and cruised under the line 5 lengths clear of Gattopardo, completing the trip in a time of 1:23.67. It was another 3 lengths back to Jockey Ridge third.
Results Chart from DRF. 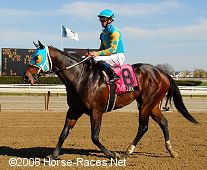 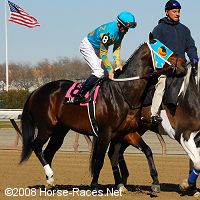 Left: J Be K returns after the race. Toby Sheets, assistant to trainer Steve Asmussen said, "He ran great and he ran just the way the boss thought he would. We tried the Louisiana Derby, but it looks like he is a sprinter or maybe a one-turn miler. I'm sure the boss will see how he comes out of the race and make his plan after that."

Right: J Be K in the post parade. His jockey Garrett Gomez said, "I let him kick on early. I felt that we and the other horse (Go Go Shoot) went quick early on, but my horse was traveling well. Before the quarter-pole, I decided to have him kick on and put away the other horse and get to the wire." 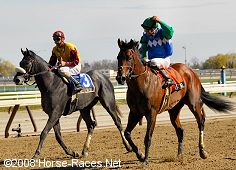 Jockey Ridge hit the gate at the start, stalked the pace wide the whole way under jockey Edgar Prado, and tired in the stretch, holding third by a head. The Barclay Tagg trainee improved his record to 1 win, 2 seconds, and 1 third in 5 starts, earning $60,605 for owner Alan R. Cook.