The $300,000 Carter Handicap (G1) for top older sprinters is the co-feature on Wood Memorial day. A field of nine contested this 7 furlong dash on the main track, with Donn Handicap winner Spring at Last sent off as the 6-5 favorite, coming into the Carter of a three race winning streak. 11-4 second choice and New York-bred Bustin Stones entered the race undefeated in 5 lifetime starts, including the General George at Laurel last time out. Rounding out the top three on the board was 7-1 Lord Snowdon, second to Bustin Stones in the General George after winning the Paumonok at Aqueduct.

Bustin Stones and 13-1 Executive Fleet, the two outside posts, were quickest out of the gate and went right to the front. The pair battled for the lead through a quarter in 22.52 and a half in 45.14, with the rest of the field as many as 3 lengths behind them At the top of the lane, the battle continued on but Bustin Stones pushed ahead by 1/2 a length in mid-stretch, getting 6 furlongs in 1:09.53. Bustin Stones would not yield the lead, taking the Carter in gate-to-wire fashion by 1/2 a length in a time of 1:22.91. It was just a neck back to late-running 14-1 Premium Wine third. Favorite Spring at Last stayed close to the pace 5th on the backstretch but tired late to finish a disappointing 8th. 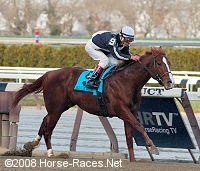 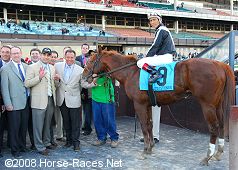 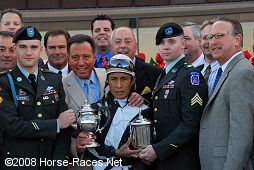 Bustin Stones in the winner's circle.

Right: Trophy presentation with owner Roddy J. Valente to the left of jockey Edgar Prado and trainer Bruce Levine on the far right. Levine, who won 2 graded stakes on Saturday (he also won the Excelsior, below) said, "He's a very nice horse. He's been in battles before and he is as game as game can be. He runs everywhere and he likes this track. Here, he beat a quality field, especially with Spring at Last in the race. He had his problems. He had knee surgery; obviously, it hasn't affected him. He's come back to win three stakes in a row. My schedule was to run him here and in the Met Mile. I think he can stretch out." 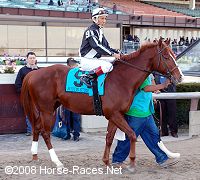 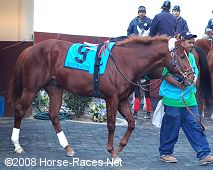 Left: Bustin Stones heads out for the post parade. Winning jockey Edgar Prado, who swept both Grade 1 events on Wood day, said, "It's been a super day! It's a good way to let everyone know that I am back in New York. My horse ran great, and broke running out of the gate. He never gave up and tried hard all the way. I was just very proud of him. Speed has been holding pretty well, and that was to our advantage. He just did everything so easily."

Right: Bustin Stones in the paddock before the race. 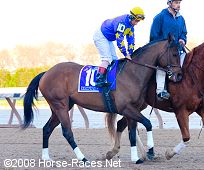 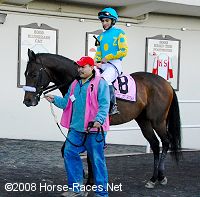 Left: Second place finisher Executive Fleet in the post parade. His trainer Linda Rice said, "I was very pleased. He got beat 1/2 length and I don't think we had any edge in the weights. This horse has had a number of setbacks. He's battled though them, and he showed today that he is very game." His jockey C. C. Lopez said, "He broke good, and my original plan was to set off behind Bustin Stones. It seemed like I was right there without pushing him. So I said to myself, I'm going to stay right where I am and see what he's got. Bustin Stones is a good horse, but so is mine and I look forward to a rematch."

Right: Third place finisher Premium Wine in the paddock. Premium Wine was outrun back in 7th early under jockey Alan Garcia, but put in a strong rally on the inside late to get third. The Anthony Dutrow trainee improved his record to 5 wins, 3 seconds, and 2 thirds in 11 starts, earning $366,450 for owner Zayat Stables LLC. 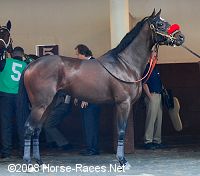 Beaten favorite and 8th place finisher Spring at Last strikes a pose in the paddock. Spring at Last chased the pace while 3 wide and was done after half a mile. The Doug O'Neill trainee entered the race off of three straights wins, in the 2007 Godolphin Mile on the Dubai World Cup undercard, an allowance race on the turf at Santa Anita in December, and then the Donn Handicap last time out. 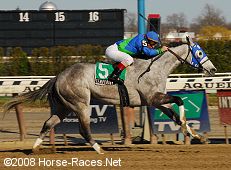 The $200,000 Excelsior Handicap (G3) featured a field of eight older horses going 1 1/8 miles on the main track. Night Light, entering the race off a four race winning streak including the John Campbell at Laurel and the Gallant Fox at Aqueduct, was sent off as the 5-2 favorite over 3-1 second choice Magna Graduate, fifth in the New Orleans Handicap last time out. Wafi City, winner of an allowance race by 9 1/2 lengths last out, was the 4-1 third choice on the board.

Jockey C.C. Lopez sent 11-1 Temporary Saint to the front immediately, and he was allowed an uncontested lead through fractions of 23.92, 48.43, and 1:13.65 while 1 1/2 lengths ahead of Wafi City in second. Entering the stretch, Lopez asked for run and got it, as Temporary Saint opened up a 3 1/2 length lead at the 1/8 pole after 1 mile in 1:38.13. Favorite Nite Light, who raced in 3rd early, closed on the outside late but was left with too much ground to make up as Temporary Saint cruised under the line 1 1/2 lengths clear, taking the Excelsior in gate-to-wire style in 1:51.13. It was just a neck back to late-running 7-1 Angliana in third.
Results Chart from DRF. 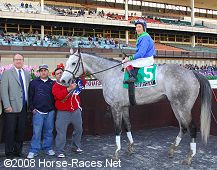 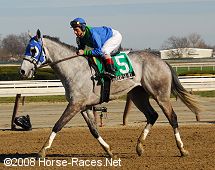 Left: Temporary Saint in the winner's circle with trainer Bruce Levine on the far left. Levine said, "I had a lot of confidence in this horse. I wanted to run him in this race. I knew he was going to get to the lead because there was no speed in the race. I knew Wafi City was going to sit behind him. I knew the fractions were slow, but the track has been slow all day. This was a big race for him."

Temporary Saint returns after the race. Winning jockey C. C. Lopez said, "I thought he was going to run good because he ran so well last time. I don't think I rode the best of races on him last time. He's a good horse, and I knew if I was allowed to get away the way I did, he would be tough to get by. He doesn't really want to be hit. I hit him left-handed one time and he resented it. As soon as I went back to hand riding him, he just took off again." 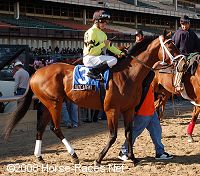 Left: Second place finisher and beaten favorite Nite Light heads out for the post parade. Nite Lite sat third early under jockey Mike Luzzi, advanced three wide into the lane and finished gamely outside to get second, ending his win streak at four. The Todd Pletcher trainee improved his record to 5 wins, 3 seconds, and 0 third in 9 starts, earning $252,520 for owner Edward P. Evans.

Fan favorite Evening Attire made his 66th career start, however he dwelt in the gate and spotted the field several lengths at the start, losing all chance and running last at every call. Here he is seen clearly left behind by the field, with jockey Edgar Prado up.