The unofficial middle-distance championship of Europe is decided on the first Sunday in October in the Prix de l'Arc de Triomphe (G1), a 2400 meter (about 1 1/2 mile) trip around one turn of the "Grande Piste" turf course at Longchamp in Paris. With new sponsor Qatar Petroleum taking over this year, the purse was increased to a record €4 million (US $5.523 million), making it the second-richest horse race in the world, the $6 million Dubai World Cup still topping the list. Rain overnight and during the card downgraded the course to "good-to-soft" (yielding) after Saturday's races were run under a "good" course.

A field of 16 went to post in the main event before an estimated crowd of 47,000, with undefeated 3-year-old filly Zarkava sent off as the even-money favorite in her first start against males. The Alain de Royer-Dupre trainee won the Prix Vermeille last time out over the same trip, after sweeping both the French 1000 Guineas at Longchamp and the French Oaks at Chantilly. In to challenge the Aga Khan homebred included a three-horse Coolmore entry trained by Aidan O'Brien. Duke of Marmalade, winner of 5 straight Group 1 events including the Juddmonte International at Newmarket and the King George VI and Queen Elizabeth Stakes at Ascot, Soldier of Fortune, a close second in the Grand Prix de Saint- Cloud after winning the Coronation Cup at Epsom, and Red Rock Canyon, sent in as the rabbit, were joined in the betting as the 7-2 second choice over 7-1 Vision D'Etat, winner of the Prix Niel, the major local prep for the Arc.

As expected, Colm O'Donoghue sent Red Rock Canyon right to the front and he was allowed an uncontested lead of as many as 5 lengths, with with Schiaparelli, Zambezi Sun, and It's Gino contesting second place the whole way. Favorite Zarkava was unhurred near the back of the field by regular rider Christophe Soumillon, saving ground on the inside for the sweeping turn of the Grande Piste. Entering the stretch, Red Rock Canyon was angled to the outside to be eased, allowing It's Gino to inherit the lead at the 1/4 pole. Soldier of Fortune joined him up front, but Zarkava had found running room between horses and was closing with a rush. With just over 1/16 mile remaining, Zarkava ran right by the pair and kicked clear to win by 2 lengths over 14-1 Youmzain in a time of 2:28.80 over the yielding turf. It was another 1/2 a length back to Soldier of Fortune and It's Gino who dead-heated for show. 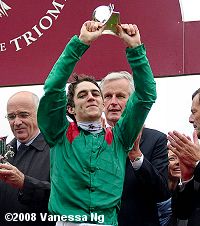 Left: Christophe Soumillon celebrates as Zarkava parades for the fans.

Right: Christophe Soumillon shows off his trophy during the presentation. Soumillon said, "Journalists often try and find a weakness in champions but this filly has no weakness. She has a temper but you need a temper to be a champion. She gave me a similar feeling to Dalakhani and I think he is the only horse who might have defeated her. She is an outstanding filly and will remain in my memory for the rest of my life." 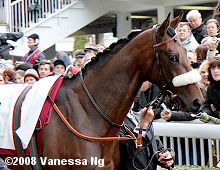 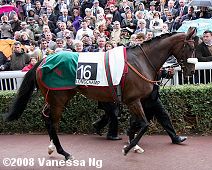 Zarkava in the walking ring before the race. Winning trainer Alain de Royer-Dupre said, "My reaction is that it is so great to train a filly who has so much talent and is so good. It is marvellous and I was very confident during all of the race, expect for the start where she didn't go straight but after that it was OK. Every day you are anxious in case she has a problem or if something goes wrong. She is a filly who can be a little bit nervous sometimes, but I have a very good assistant who looks after her well. From the beginning of the week I felt she would go well but you are always afraid of a last-minute accident. When I saw the filly in the parade I was very confident as she was very strong and I was thinking everything is OK, and she didn't pull as hard going to the start as she did last time. I can't say she doesn't like soft ground, but she was racing against older colts who go on soft ground better." 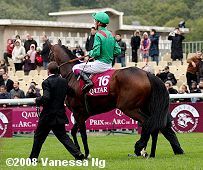 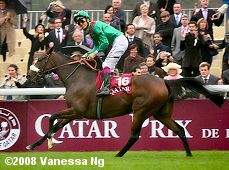 Right: Zarkava runs out after the finish. Her owner and breeder His Highness the Aga Khan said, "This is as well as you can do in breeding thoroughbreds. After nearly 90 years of breeding in the family this is a remarkable occasion. There have been other important moments in my life as I am not just a racehorse owner and breeder, but in the racing world what I have done I feel is one of the most important times we have lived through. The filly has been very good this year and this was something that was already clear in my mind. We were worried about the draw so didn't give any specific instructions to Christophe as he knows the filly. The decision about her future has not been taken yet. She won't race again this year and I will discuss next year with my team." 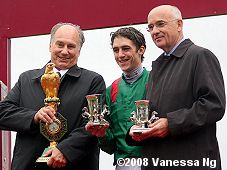 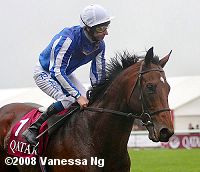 Left: Owner Aga Khan, jockey Christophe Soumillon, and trainer Alain de Royer-Dupre with their Arc trophies. Soumillon said, "I was not worried about her making a mistake and she didn't jump slowly today. It was the greatest moment of my life when she came into the straight going so easily, just like Dalakhani. They are two champions who will be in my life forever."

Right: Second place finisher Youmzain, who was also second in last year's running, returns after the race. His owner Jaber Abdullah said, "He is a great horse but she is a really great filly." Racing manager Bruce Raymond added, "(The traffic) didn't cost him the race. The winner is an exceptional filly. He won't run again this year." His jockey Richard Hills said, "He ran a fine race and if anything he is better than last year. There was one split up the fence but that didn't work out and then the filly came and the gap closed a bit. He did great to finish second and it would be a good idea to bring him back around here again next season." 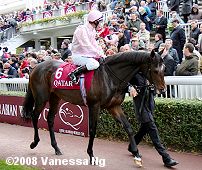 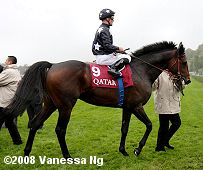 Left: Third place finisher (in a dead heat) It's Gino His trainer Pavel Vovcenko said, "He's probably better held up and maybe hit the front a bit soon, but he's still run a great race and we plan to go for the Japan Cup next." Jockey Thierry Thulliez added, "I rode him as though we were in a Quinté handicap. I made the most of our good draw (2) and he ran a great race behind two champions. I even thought we might win halfway up the straight and the horse was very brave to battle right to the end."

Right: Third place finisher (in a dead heat) Soldier of Fortune His trainer Aidan O'Brien said, "I'm not using the ground as an excuse, they've both (Soldier of Fortune and Duke of Marmalade, 5th) run good races. They both have plenty of options and we'll see what happens." His jockey Seamus Heffernan said, "He would have preferred a softer track, that is the only excuse that we can offer as we had an excellent run of the race."