The Prix de l'Arc de Triomphe at Longchamp in Paris is traditionally run on the first Sunday in October and is the highlight of the European racing season. Longchamp also hosts a card of stakes races on the Saturday before Arc day, two of which are Group 1 events. The €250,000 (about US $345,000) Total Prix de la Foret (G1) is a 1400-meter (about 7 furlong) sprint for older horses over the "Grande Piste" course, with Paco Boy sent off as the 3-2 favorite in the field of 8 over 5-2 second choice African Rose and 5-1 third choice Natagora.


38-1 Duff went to the lead immediately and was stalked by Natagora for the first 5 furlongs, while favorite Paco Boy was held up near the back of the field early. At the top of the stretch, Duff tired and dropped from contention allowing Natagora to inherit the lead, but jockey Christophe Soumillon had moved Paco Boy to the outside for his rally. Paco Boy passed Natagora at the 1/8 pole and drew off late to an impressive 3 length victory in a time of 1:19.80 over the good turf course. It was another 2 1/2 lengths back to 20-1 U.S. Ranger third.
Results chart from Sporting Life
GENYcourses - charts (listed as reports), video replays, and more for the entire Saturday card. 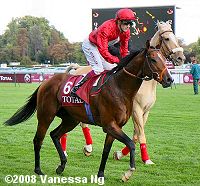 Paco Boy returns after the race. Assistant trainer Richard Hannon Jr., son of trainer Richard Hannon Sr. said, "He's a lovely horse. He travelled very well today and has been most impressive all year. Some of the owners are quite keen to take him to the Breeders'Cup but we will have to see. He's adaptable and goes on any ground. Seven furlongs is his best trip but unfortunately there aren't many races at that distance so he often has to go up in trip. He's consistent and deserves this Group 1 win. He'll stay in training next year when the Lockinge could be an early target." 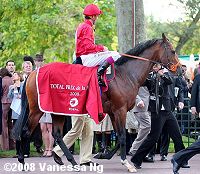 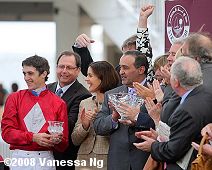 Left: Paco Boy with his winner's blanket in the walking ring.

Right: The trophy presentation for the Prix de la Foret. Winning jockey Christophe Soumillon added, "It was a great ride today, he's a very nice horse. I thank (regular rider) Richard Hughes for his good instructions on the horse." 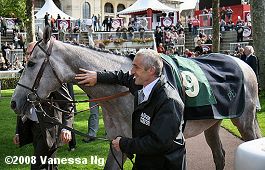 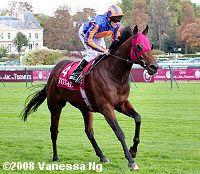 Left: Second place finisher Natagora in the walking ring before the race. His trainer Pascal Bary said, "Once again a great race. Seven furlongs is her real sport. She's racing at the top since a long time and never missed an assignment, apart from the Prix du Moulin, last time out, when she was below par. I don't know what's next. It depends on what she does next season, whether she stays in training or not." Jockey Christophe Lemaire added, "She broke well and was relaxed throuhout the race. She took her breath in the false straight and gave everything after that, as this brave filly always does."

Right: Third place finisher Us Ranger returns after the race. His jockey John Murtagh said, "He ran very well although he missed the kick a bit. He pitched a bit coming out of the stalls so had some ground to make up. At this stage of the season, this is a good distance for him."


The €250,000 Qatar Prix du Cadran (G1) was originally run on Arc day, but this year was moved to Saturday. This 4000-meter (about 2 1/2 mile) marathon features the best stayers in Europe. Defending champion Yeats and Noble Prince were coupled in the wagering and sent off as the 7-10 favorite over 7-2 second choice Kasbah Bliss and 9-1 third choice Incanto Dream. Noble Prince led most of the way while being stalked by 38-1 Orion Star in second. Both Kasbah Blitz and Yeats stayed close to the pace a few lengths behind. At the 3/8 pole, Noble Prince tired allowing Orion Star to inherit the lead into the stretch. However, 10-1 fourth choice Bannaby, who was 4th early, put in his bid in mid stretch to take over the lead at the 3/16 pole. Incanto Dream, held up early, put in a good rally late but Bannaby dug in and held him off by a head in 4:22.20. it was another 1/2 length back to Orion Star third. Odds-on favorite Yeats was prominent early but did not show any late rally, disappointing in fifth. His jockey John Murtagh said, "He just ran badly."
Results chart from Sporting Life 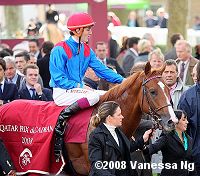 Bannaby in the walking ring with his winner's blanket after the race. Winning trainer Delcher Sanchez said, "To win one Group 1 (King's Stand Stakes at Royal Ascot with Equiano) is difficult, but to win two is incredible! And especially as they have been at opposite ends of the scale for the distance, with 1000m and 4000m. He's finished now for the year and we'll start to dream about the Gold Cup at Royal Ascot." 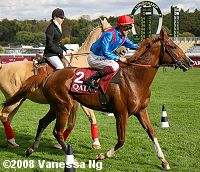 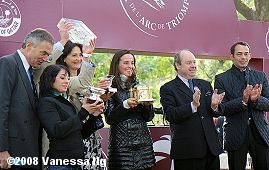 Left: Bannaby returns after the race. Jockey Christophe Soumillon won both Group 1 races on Saturday's card and was punished after his second victory for "excessive use of the whip." Soumillon said, "It's Arc weekend and you've got to give everything. I don't think it's right that I should be punished, especially as I don't think I was excessive. I was striking the whip onto the rail and my whip was even broken."

Right: The trophy presentation for the Prix du Cadron 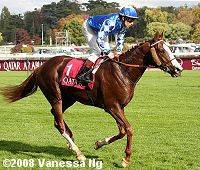 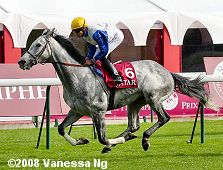 Left: Second place finisher Incanto Dream returns after the race. His trainer Carlos Lerner said, "I thought we would win this race and I was only wrong by a head! The horse took a little time to find his stride in the final straight and he arrived too late. The soft ground suits him well and if everything goes well he should take his chance in the Prix Royal-Oak (Gr 1, 26th October)."

Right: Third place finisher Orion Star goes by the first time. His trainer Henri-Alex Pantall said, "He ran very well. I would have preferred softer ground. I don't know if he'll run again this season, we'll have to see as he comes out of today because it was a tough race. He will stay in training next year." 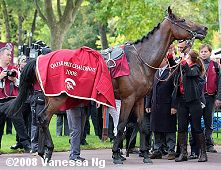 Watar after the race with his winner's blanket. Winning trainer Freddie Head said, "It was an impressive performance, but he may have been a little flattered as it was a small field and everything went right for us. We'll see how he comes out of this, but I see no reason why not to look at the Prix Royal-Oak. I hope he can develop into a Cup horse next season."


The Qatar Prix de Royallieu (G2) is a 2500-meter (about 1 9/16 mile) trip for older fillies and mares. 9-2 Honoria and 55-1 Mimetico battled for the lead for the first 10 furlongs, while even-money favorite Dar Re Mi stalked them close to the pace the whole way. At the 1/4 pole, Dar Re Mi passed the tiring pacesetters to take the lead, but 33-1 outsider Balladeuze, slow most of the way and 10th at the top of the lane, closed well down the center of the course to take over the lead at the 1/8 pole. Balladeuse was all out to hold off late-running 48-1 Tres Rapide at the line in 2:38.30. It was another 1 1/2 lengths back to Dar Re Mi third.
Results chart from Sporting Life 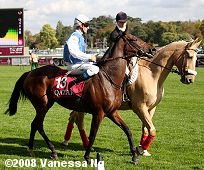 Balladeuse returns after the race. Winning jockey Olivier Peslier said, "She accelerated very well having been tapped for speed on the descent. While some of the others got bumped coming through the field she got a clear run down the outside, and is an improving filly." 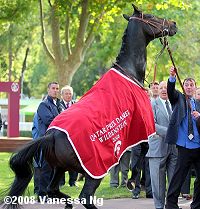 The Qatar Prix Daniel Wildenstein (G2) is a 1600-meter (about 1 mile) trip for older horses. 9-5 favorite Famous Name set the early pace while being stalked by 2-1 second choice Sageburg. With a furlong remaining, Sageburg moved up to challenge for the lead and took over, however 3-1 third choice and defending champ Spirito Del Vento, 6th early, closed well to nail Sageburg late for a 3/4 length victory in 1:39.10. It was another 1 1/2 lengths back to favorite Famous Name third.
Results chart from Sporting Life

Right: Spirito Del Vento gets a bit spirited before he heads back to the barn. 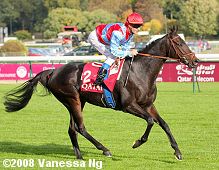 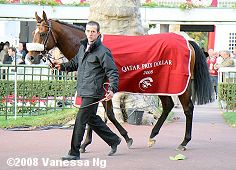 The Qatar Prix Dollar (G2) features older horses going 1950 meters (about 1 3/16 miles). 24-1 Gloria De Campeao led for the first 5 furlongs while being stalked by 4-1 Boris de Deauville and 6-1 Trincot. Jockey Ioritz Mendizabal asked Trincot for run at the 3/16 pole and got it, as he accelerated past the pacesetters at the 1/8 pole and held off the late rally of 5-1 Loup Breton by a head at the line in 2:03.50. It was another 2 l2ngths back to 9-2 The Bogberry third.
Results chart from Sporting Life

Right: Trincot heads back to the barn after the race wearing his winner's blanket.

On to the Prix de l'Arc de Triomphe - the feature race of the weekend
On to the 4 undercard stakes - including the Prix de l'Opera, Prix de l'Abbaye, Prix Jean-Luc Lagardere, and Prix Marcel Boussac. All are Grade 1 races.

If you want to understand some of the differences between racing in North America and France, check here.