Although the big race of the day is the Prix de l'Arc de Triomphe, it is just one of five Group 1 stakes on the card. Arc weekend to the Europeans is analogous to the Breeders' Cup Championships in America, with multiple divisions settling their year-end championships over 2 days. The other races on Sunday include the Prix de l'Opera at about 1 1/4 miles for the fillies and mares, the Prix de l'Abbaye at about 5 furlongs, the Prix Jean-Luc Lagardere Grand Criterium at about 7 furlongs for the juvenile colts, and the Prix Marcel Boussac Criterium des Pouliches at about 1 mile for the juvenile fillies. All races on Arc day are contested over the "Grande Piste" turf course at Longchamp except the Prix de l'Abbaye which was run over the "Ligne Droite" or straight line course which bisects the infield. Rains during the day downgraded the course to "good-to-soft" or yielding, after Saturday's racing was conducted over a good course.

The distaff equivalent of the Arc is the €250,000 (about $345,000 U.S.) Qatar Petroleum Prix de l'Opera (G1), featuring a field of 14 older fillies and mares going 2000 meters. 58-1 Lady Gloria set the early pace while being stalked by 7-2 Treat Gently. Turning for home, Lady Gloria continued to lead but tired and dropped from contention at the 3/16 pole. 2-1 favorite Lush Lashes, who was up close to the pace early, moved up along the rail to take the lead at the 1/8 pole, but 12-1 Lady Marian, 8th at the top of the lane, swung out wide for room and closed with a rush to win going away by 1 1/2 lengths in 2:03.80. It was another 1 1/2 lengths back from Lush Lashes to 9-2 Katiyra third.
Sporting Life chart
GENYcourses - charts (listed as reports), video replays, and more for the entire Arc de Triomphe card.

Winning jockey Dominique Boeuf said, "She's a real racehorse! After her good win in the Prix de la Nonette she has proved her significant talents. She's improved again and the race was like a walk in the park for her today. I am delighted with my association with Werner Baltromei as the horses in the stable are better and better year after year and I'll sign to be his partner for a next Group 1!" 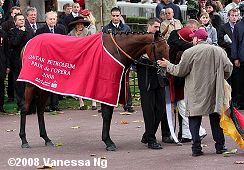 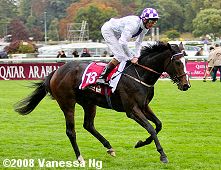 Left: Lady Marian in the walking ring for the post race festivities. Winning trainer Walter Baltromei said, "For me, Dominique Bśuf is the best jockey in the world! We don't know the limits of this filly. We'll have to see how she comes out of the race but we'll think about the Breeders' Cup. I hope that she will stay in training next year."

Right: Second place finisher and beaten favorite Lush Lashes returns after the race. Her trainer Jim Bolger said, "She has a wound on the outside of her off foreleg and it must be very sore. We'll see how long the wound holds her up but if it is just superficial we'll think about races like Hong Kong."

One of the strangest occurrences in recent racing history occurred during the start of the 2nd race, the Prix de l'Abbaye (G1), a 1000 meter sprint open to all ages for a purse of €250,000. The gate did not open for Fleeting Spirit while the rest of the field started down the course. Overdose was the only horse to complete the distance as the others who had started were pulled up before going 3 furlongs. It was a scene reminiscent of the 1993 Grand National that was declared no contest due to a false start. French racing officials decided to reschedule the race to after the last scheduled race on the card, with three horses scratching out including Overdose.

When they did get underway officially at 5:30PM, 17 of the original 20 broke from the gate. 40-1 Captain Gerrard led for the first 3 furlongs, while stalked by 100-1 longshot Moorehouse Lad, then stopped badly when bothered at the 3/16 pole, allowing Moorehouse Lad to inherit the lead. 7-5 favorite Marchand D'Or, who sat in midpack early, came outside for running room and took over the lead with a furlong remaining, drawing clear to a 1 1/2 length win in 54.40 seconds. It was another length back from Moorehouse Lad to 15-2 Borderlescott third.
Sporting Life chart 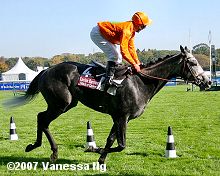 Left: Marchand D'or after last year's Prix de la Foret. Winning jockey Davy Bonilla said, "The race unfolded as I had thought it would. Behind Equiano, we had a wonderful trip and despite a short flat moment. He responded alright when I urged him to go though. It is a shame for the record. We could have beaten that as I was free wheeling in the last 150 yards. I was not to keen on asking him anything more. The race was in the bag." 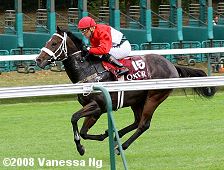 Winning trainer Freddy Head said, "I've never known a horse like him, going back to the great British sprinters over the years like Dayjur. I've never ridden a horse as quick myself either and he proved he can run in Group Ones from five to seven furlongs. We might well go to Hong Kong now if he is OK."

Right: Overdose "winning" the false start running. The undefeated Hungarian champ's trainer, Sandor Ribarszki, was quite upset and said, "I don't think we are going to run again. I am very very unhappy, we have come 1700km for nothing." The horse did wind up scratching when the race was re-run later in the day.


The other two stakes races on Sunday featured the juvenile divisions. The richest race of the undercard is the €350,000 ($483,000 U.S.) Prix Jean-Luc Lagardere Grand Criterium (G1) at 1400 meters. Only 7 went to post but there were just 6 betting interests, with Aidan O'Brien sending out Mastercraftsman and Sea of Marmara for Coolmore as the join 1-2 favorites. 6-1 Desert Phantom was quickest away and led for the first 1/4 mile before 4-1 second choice Naaqoos took over. The pair battled on the turn and into the stretch, before Desert Phantom tired and dropped from contention. 9-1 Milanais put in a strong rally from last early but Maaqoos held him off in the final strides to win by a head in 1:18.40. It was 2 lengths back to 22-1 Intense Focus third, while Mastercraftsman showed no rally to finish fourth and stablemate Sea of Marmara was eased.
Sporting Life chart 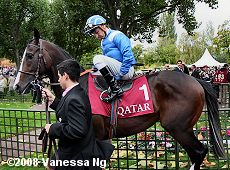 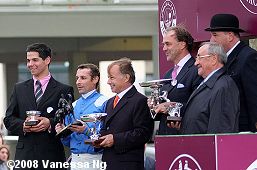 Left: Naaqoos in the walking ring before the race. Winning jockey Davy Bonilla said, "He had got into the habit of breaking slowly from the stalls but today he jumped out and I went from being the jockey who was supposed to ride a waiting race to one who lead the field! He's moved up a category and no doubt still has progress to make. He's a very good colt who should make a horse for the Poule d'Essai des Poulains or 2000 Guineas next year."

Right: The trophy presentation for the Prix Jean-Luc Lagardere. Winning trainer Freddy Head said, "The horse gets tougher in each race and he has made a lot of progress. I congratulate Davy Bonilla for the great ride he gave the horse as he was supposed to wait but the way the race turned out he found himself in front as the horse is very fast. He had the presence of mind to not stop him, and make the most of his speed. That's the sign of a great jockey."


The juvenile filly division competed in the Total Prix Marcel Boussac Criterium des Pouliches (G1). A field of sixteen 2-year-old fillies went 1600 meters for a purse of €300,000 ($414,000 U.S.) 7-2 Marquesa led the field down the backstretch and around the turn. Into the stretch, Marquesa stubbornly held the lead but 28-1 Proportional, who had stalked her the whole way, passed her at the 3/16 pole and drew away to win by 3 lengths over 7-1 Elusive Wave, who in turn was just 3/4 length in front of late running 2-1 favorite Copperbeech third. The running time was 1:36.00.
Sporting Life chart 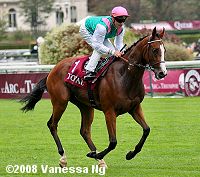 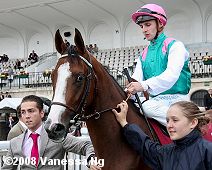 Left: Proportional returns after the race. Winning trainer Cristianne Head-Maarek said, "I was convinced that she would win on her debut and I was disappointed in the Prix des Marettes where we did not understand what was asked of her. This did not diminish the respect that I have for her. Then I ran her over 7 furlongs at Chantilly to avoid any travel, but I knew that the distance was too short for her. I asked the Prince (owner Khalid Abdullah) to run her in this Fillies' Criterium and was convinced that she had a leading chance. She is bred to stay further and will now have a break. You will see her next year."

Right: Proportional heads out for the post parade. Winning jockey Stephane Pasquier said, "She showed more speed than in her first two outings and really accelerated well when I asked her. She was then very brave right to the end." 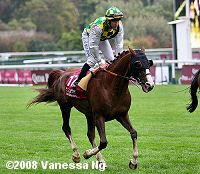 For the first time in history, an Arabian race was contested on the Arc undercard, as a field of 20 older Purebred Arabians went 2000 meters (about 1 1/4 miles) in the €450,000 Qatar Arabian World Cup (G1), now the richest Arabian race in the world. The race was previously called the French Arabian Breeders' Cup Classic. At the end, a near triple dead-heat ensued, as Lahib (black blinkers, outside) nosed out Nil Blanc (3, center) for the win, who in turn nosed out Jalab Al Khalidiah (10, on the rail) for place. The placing judges took about 1/2 an hour to study the photo before declaring the full order of finish. It was just a neck back to fourth place finisher Al Fatih (5, outside), who was a neck in front of fifth place finisher Badad (16). The running time was 2:16.00 over the yielding course.
chart from GENYcourses

Right: Lahib returns after the race.

On to the Prix de l'Arc de Triomphe - the feature race of the weekend
On to the 6 Saturday stakes - including the Prix de la Foret, Prix du Cadran, Prix De Royallieu, Prix Chaudenay, Prix Daniel Wildenstein, and Prix Dollar

If you want to understand some of the differences between racing in North America and France, check here.