The $750,000 Jockey Club Gold Cup (G1) is the highlight of the Belmont Park Fall Championship Meeting. This 1 1/4 mile main track event attracts the top older horses on the east coast, and is part of the Breeders' Cup Challenge "Win and You're In" program for the Breeders' Cup Classic. Heavy rains on Friday and overnight and steady drizzle throughout the day led to a sloppy main track and yielding turf course, and officially just 8,563 were on hand, although those numbers may have been inflated slightly due to turnstile spinners taking advantage of the stadium seat giveaway. As expected, last year's winner and Horse of the Year Curlin was sent off as the 2-5 favorite in the field of 8, exiting a win in the Woodward. In to challenge the champion included 4-1 second choice Mambo In Seattle, second by a nose in the Travers last out, and 7-1 Wanderin Boy, third to Curlin in the Woodward.

Jockey Alan Garcia sent Wanderin Boy to the lead soon after the start, and he set a slow pace for the first mile through fractions of 24.67, 48.79, 1:13.08, and 1:36.70, with 17-1 Merchant Marine stalking him a length behind the whole way. Regular rider Robby Albarado kept Curlin out of trouble out wide in 5th down the backstretch. Turning for home, Albarado asked Curlin to put in his bid for the lead, and the champion gradually gained on Wanderin Boy. The pair dueled from the 3/16 to the 1/8 pole, before Curlin finally pulled ahead late to win by just 3/4 length in a time of 2:01.93 over the sloppy, sealed track. It was a long 3 3/4 lengths back to Merchant Marine third. 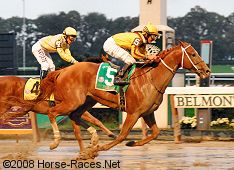 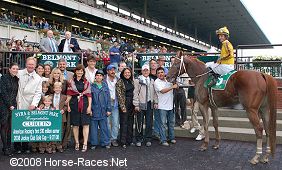 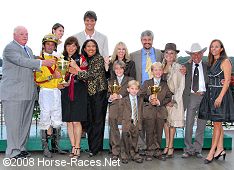 Right: Dinny Phipps (far left) presents the trophy for the Jockey Club Gold Cup. Majority owner Jess Jackson of Stonestreet Stables said by phone from California, "I have been a lifetime supporter of Thoroughbred racing, and many of you don't know all of the things I've done. I feel that Curlin is the epitome of what my lifetime has contributed to the racing community and I hope to do more. As to going out to Santa Anita (for the Breeders' Cup Classic), we'll probably load him up, but first we'll have to get him adjusted. But it is up to him whether he likes the track and the surface. So, those are concerns we still have. But we'll consider it now that we're past this hurdle. That's the next prospect for us and we'll give it every bit of attention. Let's put it this way: we haven't avoided (Big Brown). I don't fault (IEAH Stable) for the way they've handled Big Brown. But if he is truly going to the big race, we'll have to see whether Curlin likes the track. We're not trying to avoid him and there is always the Clark after that or the Japan Cup (Dirt). So, we have to take them one at a time. I don't want to risk a horse of Curlin's stature that we need in the gene pool. So, I am being very cautious and doing my due diligence first." 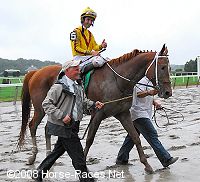 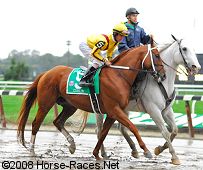 Left: Curlin circles after the race as jockey Robby Albarado gives the thumb's up. Albarado said, "I'm sure it's not going to hit me for a while. It's really amazing. Steve instilled a lot of confidence in me before the raced. He just ran his race again and gave me that big Curlin move on the turn. It was tremendous, and very emotional. The bar is set against him every time, but he exceeds our expectations every time he runs. I didn't need (the whip). He was just skipping over the track." 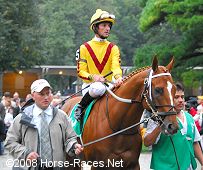 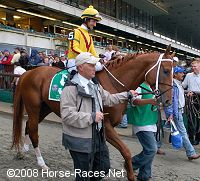 Left: Curlin heads out of the paddock with assistant trainer Scott Blasi leading him. Co-owner Barbara Banke said, "We'll see. He just won this race. We'll see how he comes out of this race. What's good for him is really the No. 1 factor. Is he healthy? Happy? Does he look fit? We'll wait for our wonderful team to discuss everything, and the course at Santa Anita is also a factor."

Right: Curlin heads out to the track for the post parade. Winning trainer Steve Asmussen said, "I really liked the finish, that was my favorite part. He was away well, shuffled away a little bit down the backside. I could tell that Robby was very confident on him. He put himself in a perfect position. He looked fabulous through the stretch. I can't say how proud I am to be part of what's just happened. I don't want to go any further without thanking Jess (Jackson) and Barbara (Banke, Jackson's wife and co-owner of Curlin) for the opportunity to put that much money aside to let this horse develop and to let this happen. To make history - the all-time money-winning horse in North America -- it's very special. The job that (assistant) Scott Blasi and (exercise rider) Carmen Rosas have done with him on a day-to-day basis enabled him to maintain the consistency. For him to be able to carry the weight of expectation, I'm very proud." 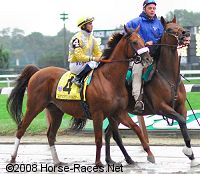 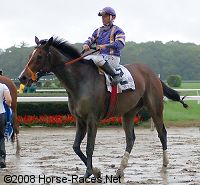 Left: Second place finisher Wanderin Boy in the post parade. His jockey Alan Garcia said, "I got beat by the best horse, and he's an excellent horse. My horse ran his race; I'm happy. Nick Zito keeps doing the job, but Curlin was much the best today. It was a great day for racing." His trainer Nick Zito added, "Curlin is in a different league. I take my hat off to him. He had to be that good today."

Right: Third place finisher Merchant Marine returns after the race. His jockey Cornelio Velasquez said, "My horse ran a big one, but the one that won is the big deal." His trainer H. Allen Jerkens said, "(Curlin) ran big. He loves the slop and he had everything his way. He is a great horse. My horse ran pretty good, but Curlin was the best."