The $600,000 Flower Bowl Invitational (G1) features top older fillies and mares going 1 1/4 miles on the inner turf course at Belmont Park. Just 5 of the originally drawn field of 6 went to post after Hostess scratched out of the race. Beverly D Stakes winner Mauralakana was sent off as the 7-10 favorite, entering the race off a 4-race winning streak, the last 3 in graded stakes company. In to challenge the Christophe Clement trainee included 3-1 second choice Dynaforce, fifth in the Glens Falls at Saratoga last out and winless since an allowance race in France last July, and 4-1 third choice Communique, second to Mauralakana in the Beverly D after winning the Modesty at Arlington. Heavy rains on Friday and overnight rendered the turf yielding on Saturday.

Jockey Alan Garcia sent Dynaforce to the lead immediately and she set slow fractions of 26.23, 52.87, 1:19.22, and 1:43.45 over the rain-soaked course, with 17-1 longest shot Jade Queen stalking her in second. Kent Desormeaux kept favorite Mauralakana restrained back in fourth early. Turning for home, Mauralakana put in her challenge for the lead three wide, but Dynaforce, taking advantage of the slow early pace, drew away through the stretch, cruising under the line 4 lengths in front in a time of 2:07.59. It was a neck back from Mauralakana to late-running third place finisher Communique. 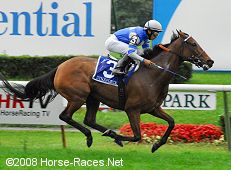 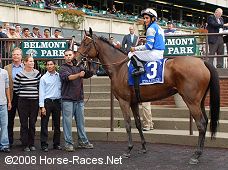 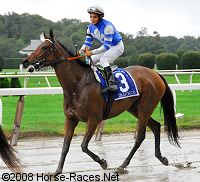 Left: Dynaforce in the winner's circle with trainer Bill Mott on the far left. Mott said, "I'm real proud of her. I saw the fractions and I thought the turf was pretty soft, 2:07 for a mile and a quarter. She's run two good races here, and the Diana at Saratoga was a top race. A horse can't run any better than she did in the Diana and she ran second. As far as the Breeders' Cup (Filly & Mare Turf), I'll have to talk with (owner-breeder John Chandler) and discuss it."

Right: Dynaforce returns after the race. 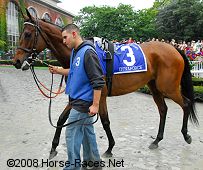 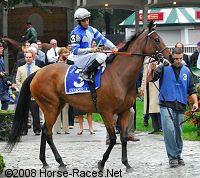 Left: Dynaforce in the paddock.

Right: Dynaforce heads out to the track before the race. Winning jockey Alan Garcia said, "It was an easy trip. She broke well and let me take the lead. I went to head to head with (Rafael) Bejarano (aboard Jade Queen) and we had Mauralakana beat. In the last strides, Dynaforce showed her stuff." 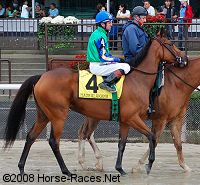 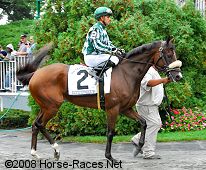 Left: Second place finisher and beaten favorite Mauralakana in the post parade. Her jockey Kent Desormeaux said, "The lack of pace and the soft going probably compromised my chances. I got past her and I was faster than the winner, but I couldn't sustain the run. The ground caused that. But the slow pace didn't surprise me." Her trainer Christophe Clement said, "Second best. She ran well. We'll bring her back to the Breeders' Cup and go from there."

Right: Third place finisher Communique heads out to the track. The 4-1 shot was unhurried for the first 7 furlongs under new jockey Javier Castellano, then put in a good rally down the center of the course late to finish a neck short of second place. The George Arnold trained daughter of Smart Strike improved her record to 4 wins, 4 seconds, and 3 thirds in 17 starts, earning $557,634 for owner-breeder G. Watts Humphrey.