The $400,000 Vosburgh Stakes (G1) is the premier race for sprinters at the Belmont Park Fall Championship Meeting. A field of 7 older horses went to post in this 6 furlong main track feature, with Lucky Island sent off as the 2-1 favorite exiting a 6th place finish in the Forego after winning the Tom Fool. In to challenge the Shadwell Stable colorbearer included 5-2 second choice Fabulous Strike, winner of this race last year as well as the Vincent Moscarelli at Delaware this year, and 9-2 third choice First Defence, winner of the Forego last out. Heavy rains on Friday led to a muddy track early in the card but this was upgraded to sloppy and sealed for the stakes races.

Fabulous Strike battled for the lead with 8-1 J Be K through fractions of 21.75 and 44.31 down the backstretch over the sloppy, sealed track. Lucky Island sat unhurried back in 6th early. Turning for home, Fabulous Strike continued to lead as J Be K faded from contention. However, Black Seventeen, the 24-1 longest shot on the board, had raced five wide early just off the pace duel and had plenty left for the stretch. When asked by jockey Clinton Potts, Black Seventeen pulled up alongside Fabulous Strike inside the 1/8 pole and poked his head in front when it counted most, getting the hard fought win in a time of 1:09.77. It was just 3/4 length back to late-running 9-1 Kodiak Kowboy third. Lucky Island, despite saving ground on the turn, showed nothing in the stretch to finish sixth. 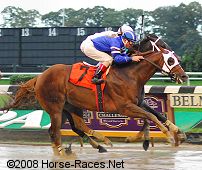 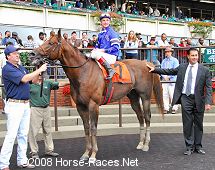 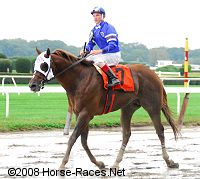 Left: Black Seventeen in the winner's circle. Winning trainer Brian Koriner said, "I've never run a horse here before. That was a long way to come to be 23-1, but this horse has won on this kind of a racetrack. We raced here instead of California today because they have a new synthetic surface and I didn't want to have to guess what it would be like. There is a lot of quality speed in California and when I saw my draw here, I was happy to be here even though I knew what the racetrack was like. We drew outside the speed and in the past he has run well on the outside." 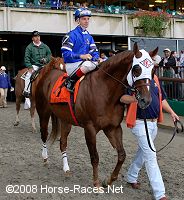 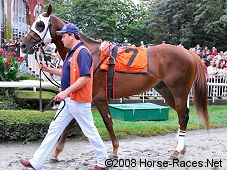 Left: Black Seventeen heads out for the post parade. Winning jockey Clinton Potts, celebrating just the second Grade 1 win of his career, said, "He always tries really hard for me. We've always gotten along together rally well. I knew he would like the slop because he ran well on it at Calder last year. I certainly didn't look up at the odds board. He was a longshot but, I was not disappointed that. If everything comes out good, we expect to go the Breeders' Cup (Sprint) and Brian will have him ready."

Right: Black Seventeen in the paddock. 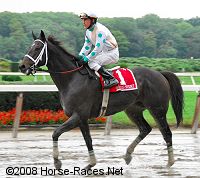 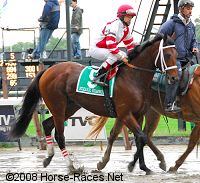 Left: Second place finisher Fabulous Strike returns after the race. His jockey Ramon Dominguez said, "He sure did try hard not to get beat. He ran hard. He was pressured all the way. As far as the fast pace, I wasn't expecting anything different." His trainer Todd Beattie said, "He ran a good race. He ripped his shoe off in the paddock and bent his shoe up. He had to run with a shoe that was sprung on him the whole way. I thought that, considering that, it was a considerably good effort. It surely looked like he gave me as much as he could. He could run over broken glass."

Right: Third place finisher Kodiak Kowboy in the post parade. The 9-1 fourth choice was unhurried down the backstretch under jockey Gabriel Saez, moved up when asked on the turn, and closed well to get third beaten just 3/4 length. The Larry Jones trainee improved his record to 6 wins, 2 seconds, and 2 thirds in 13 starts, earning $731,558 for owners Fox Hill Farm and Vinery Stables. 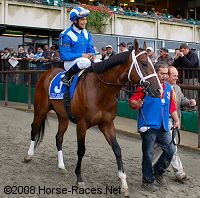 Sixth place finisher and beaten favorite Lucky Island heads out for the post parade. The 2-1 favorite raced in sixth early under regular rider Alan Garcia, saved ground on the turn, but showed no response when asked at the top of the stretch and did not improve his position, finishing sixth beaten 20 1/4 lengths. The Kiaran McLaughlin trainee has a record of 5 wins, 0 seconds, and 0 thirds in 8 starts, with earnings of $229,942 for owner Shadwell Stable.