The $600,000 Joe Hirsch Turf Classic (G1) is the major New York prep for the Breeders' Cup Turf, and is contested at 1 1/2 miles on the Widener turf course at Belmont Park. Heavy rains on Friday and early Saturday downgraded the course to yielding, and the temporary rail was set in the Lane 2 position (9 feet out). A field of 8 older horses went to post, with Sword Dancer Invitational winner Grand Couturier sent off as the 5-2 favorite over 3-1 second choice Dancing Forever, winner of the Elkhorn and Manhattan before finishing third in the Sword Dancer. 7-2 third choice Proudinsky, second to Big Brown in the Monmouth Stakes last time out, completed the top three on the toteboard.

13-1 Presious Passion was allowed an uncontested lead of as many as 3 lengths through slow early fractions of 24.97, 50.52, 1:16.84, and 1:42.35 over the wet course, with 5-1 fourth choice Strike A Deal stalking him in second down the backstretch. On the far turn, Presious Passion tired and dropped from contention, allowing Strike A Deal to poke his head in front entering the stretch, after 1 1/4 miles in 2:09.07. Jockey Alan Garcia kept favorite Grand Couturier back in sixth early, and moved him four wide into the lane for his rally. Grand Couturier responded with an impressive late kick, taking over the lead at the 3/16 pole and drawing away powerfully through the stretch to a 10 1/4 length victory over late-running 17-1 Interpatation in 2:34.84. Third place finisher Summer Patriot just missed 2nd money by a nose, and finished 9 1/4 lengths ahead of the rest of the field. Jockey Kent Desormeaux aboard Interpatation lodged an objection against Alan Garcia aboard the winner, alleging interference nearing the far turn, but this was disallowed by the stewards and the official order of finish was unchanged. 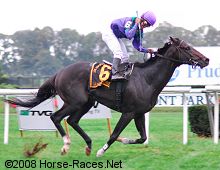 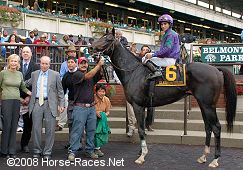 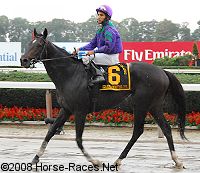 Left: Grand Couturier in the winner's circle. Winning trainer Bobby Ribaudo said, "My heart was beating, I'll tell you. It didn't really look that bad. We watch races every day, so I felt pretty good. It was just incredible, the acceleration. He just exploded. This turf was in good shape. The turf course at Monmouth last year scared us because he didn't seem to get into it. It was a little deep with mud, and he didn't really perform that day. I would think we will be going to the Breeders' Cup (Turf)."

Right: Grand Couturier returns after the race. He also won this race in 2006. 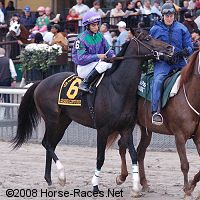 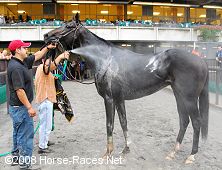 Left: Grand Couturier in the post parade. Winning jockey Alan Garcia said, "I'm not sure what the objection was about. I thought the race was pretty clean. My horse really loved the soft course. I just asked him for run on the far turn and then he just took off. He's gotten really good."

Right: Grand Couturier gets rinsed off before heading back to the barn. 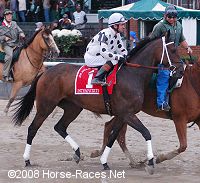 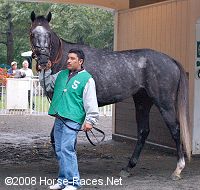 Left: Second place finisher Interpatation in the post parade. His jockey Kent Desormeaux said, "(Grand Couturier) just came over and took my path. We're lucky we didn't fall. He got by me around the turn. It didn't need to happen, he obviously shut me off. My horse ran huge." His trainer Robert Barbara said, "(Grand Couturier) slammed into us. But my horse has been the best he's ever been."

Right: Third place finisher Summer Patriot in the paddock before the race. His trainer Barclay Tagg said, "I don't know, he got tired. I guess he went the long way around and he had to make up a lot of ground, so I guess it was a little tough on him. I think if he had a little better trip, we would have been better off, but who knows? It was a big step up for him, but he ran well. Third by a nose in a Grade 1, there's nothing wrong with that."