The $600,000 Beldame Stakes (G1) features the best older fillies and mares on the east coast, going 1 1/8 miles around one turn at Belmont Park. Originally five were entered, but just four went to post after Unbridled Belle scratched out of the race. As expected, last year's Breeders' Cup Distaff winner Ginger Punch was the 1-2 favorite, entering this race off four straight wins, the last 3 in Grade 1 competition including the Personal Ensign at Saratoga last out. In to challenge the Frank Stronach homebred included 5-2 second choice Cocoa Beach, winner of the Love Sign Stakes at Saratoga in her first start after shipping in from Dubai where she won both the UAE 1000 Guineas and the UAE Oaks for Godolphin Racing. 9-2 Lemon Drop Mom, second by a nose to Ginger Punch in the Personal Ensign, and 12-1 Leah's Secret, fourth in the Ballerina last out, completed the field.

Jockey Rafael Bejarano sent favorite Ginger Punch to the lead immediately and stayed just off the rail through fractions of 24.61, 48.18, 1:12.26, and 1:36.76 over the sloppy going, with Lemon Drop Mom stalking her the whole way just to her outside. Cocoa Beach, who raced back in fourth for the first 3/4 mile, moved up to challenge for the lead inside the 1/8 pole. Cocoa Beach and Ginger Punch hooked up inside the 1/16 pole, and in the final strides Cocoa Beach dug in and pulled ahead by 1/2 a length to get the hard-fought victory in 1:49.50. It was a long 13 1/2 lengths back from Ginger Punch to Lemon Drop Mom, and another 7 3/4 lengths to Leah's Secret last. Lemon Drop Mom was pulled up on the clubhouse turn during the runout and was vanned off. 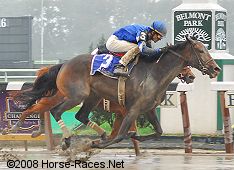 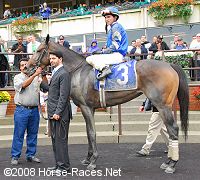 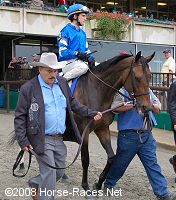 Left: Cocoa Beach in the winner's circle with trainer Saeed bin Suroor holding her. Suroor said, "She's grown up a lot since she ran earlier in the year in Dubai. She looked stronger than ever and she has learned a lot from her last race at Saratoga. She was really happy. The target now is the Breeders' Cup (Ladies Classic). I had a good feeling coming into the race (we could beat Ginger Punch). The last race really set her up and she's really grown."

Right: Cocoa Beach heads out for the post parade. 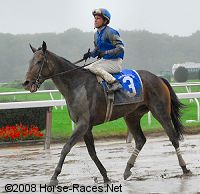 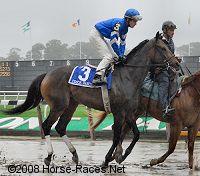 Left: Cocoa Beach returns after the race. Winning jockey Ramon Dominguez said, "This race, she broke a lot sharper than she did in Saratoga. She held her own, and she can pick it up on her own. She definitely did and proved she is capable. This is only her second race in this country and she's moving forward." 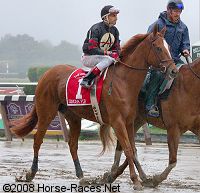 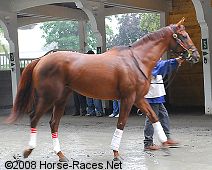 Left: Second place finisher and beaten favorite Ginger Punch in the post parade. Her jockey Rafael Bejarano said, "I was sitting in the lead and was so comfortable. We went in 24, 48 and 1:12, which is very comfortable for my horse. When we came to the turn, I saw (Cocoa Beach) was coming. I was afraid to let her go. When we got to the 1/8 pole, she was getting tired a little bit. I think the track made her tired, too." Her trainer Bobby Frankel said, "It was the 1-hole; she had no choice but to do what she did. I don't think that is her favorite way of running. I don't think the inside was the best part. I would have loved to have been on the outside. That was all I was worried about."